When you turn on the Dell XPS 13 2-in-1, you should see the initial POST, a Dell logo and then the Windows 10 loading screen. You should also see LEDs light up on the front telling you that the battery is okay and everything is working. If you’re seeing a Dell XPS 13 2-in-1 won’t turn on problem like the older XPS models had, with no LEDs lighting, there is a fix.

So far, the Dell XPS 13 2-in-1 has not been reported as having the same issue as previous XPS 13. Mine certainly hasn’t. In the older version, the laptop would fail to boot at all with no POST and no LEDs lighting up on the front. There is only one thing you can do yourself in that situation before you have to call Dell support. You have to remove the battery. That is the only action you can take that is known to fix the issue.

The fix comes from Dell themselves and has worked on quite a few Dell XPS 13 from previous generations. There is nothing to say it won’t work on the Dell XPS 13 2-in-1 too. We need to remove the battery and make sure all residual voltage is drained. Then replace and retry.

Make sure you wear an antistatic strap to ensure no static charge affects the electronics.

1. Place the Dell XPS 13 2-in-1 upside down on a clean surface.
2. Remove the eight M2 screws that hold the base cover in place. 3. Remove the hidden screw from underneath the XPS badge.
4. Gently pry the base cover away from the laptop.
5. Disconnect the battery cable from the mainboard. 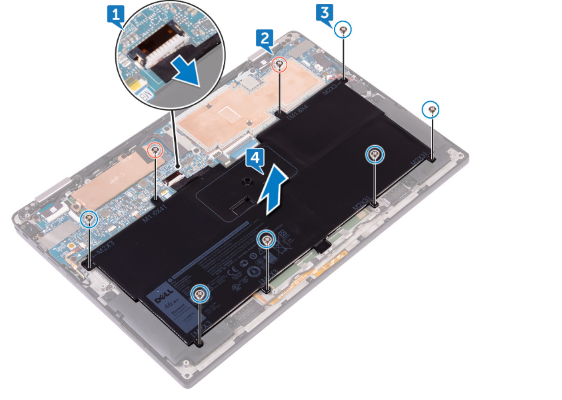 6. Wait 15-20 seconds for the residual voltage to drain.
7. Hold the power button down for a further 15 seconds.
8. Reconnect the battery cable.
9. Align the base cover and screw it back into place. Don’t overtighten.

Now try rebooting your device and see what happens. If all goes well, the Dell XPS 13 2-in-1 will boot and operate as normal. If it doesn’t it’s time to find out if you’re still under warranty!