Currently, I'm using an HP Slimline 290-p0043w as the file server with a 2TB 970 Evo+ as the working drive being shared with the other machines. The setup looks like this (all connections are one gigabit): 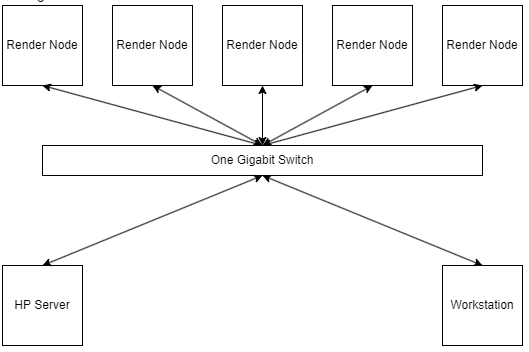 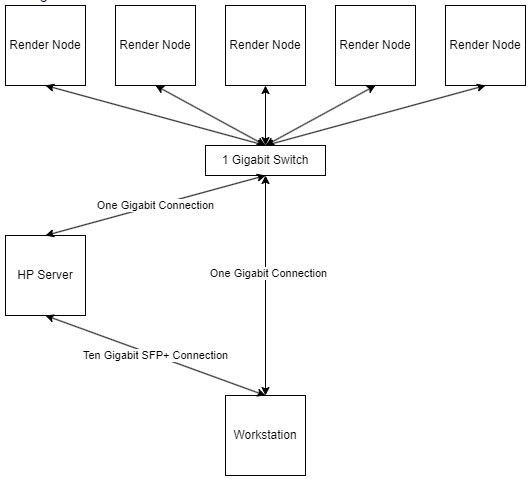 The problem with this approach was that I was not able to get the Workstation to connect to the HP Server at 10-gigabit; it would always use the 1 gigabit connection instead. I am not sure if it is possible to have this setup and force Windows to use the 10 gigabit connection. So then I tried this configuration: 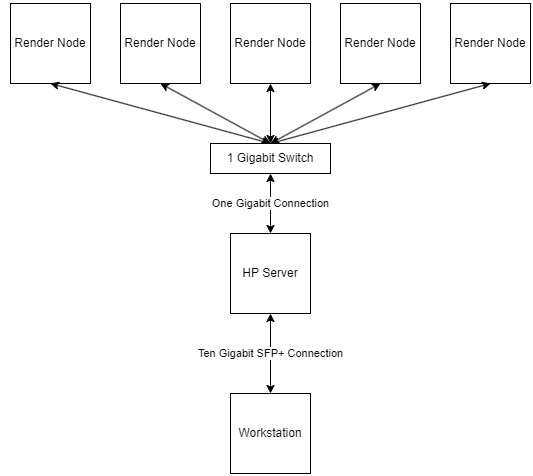 (These tests were performed transferring a 10 gigabyte file from a WD SN750 NVMe SSD on the workstation to the 970 Evo+ on the HP Server or a SATA3 SSD on the render node). Additionally, the latency to connect from the workstation to the render nodes is a lot worse. A remote desktop connection would take less than 0.1 seconds to start in configuration 1, but under configuration 3 sometimes it can take 1 to 2 seconds.

My last thought would be to try something like this, but I do not have the hardware for it currently: 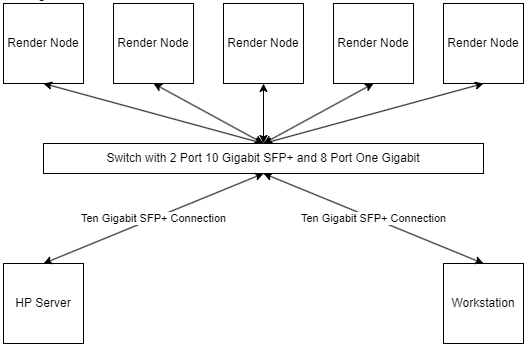 I would like to avoid this configuration if possible to minimize the amount of hardware necessary.

Does anybody have any advice on what I should try here? I'm at a bit of a loss right now. I'd appreciate any pointers on how to proceed.
0

Not sure if I understand it correctly, but are you aware that 1Gbit is 125 MByte?
1
B

I did not completely read your post...tired today will do better tomorrow if this does not answer.

In the diagram where you dual connected the pc and the server. You can make this work if you use different IP blocks. Leave the gigabit one like normal for your internet and your router will provide the IP. On the 10g network you will have to manually assign the IP. You want it different subnet than the main network. So if your main network is 192.168.1.x you could use 192.168.200.x assigning say 192.168.200.10 to one machine and 192.168.200.11 to the other. Just to be simple leave the mask 255.255.255.0. Make sure you leave the dns and gateway fields blank
You must log in or register to reply here.
Share:
Facebook Twitter Reddit Tumblr WhatsApp Email Link