Question 2k display over a fullhd one with more hz? VN vs TN

Hello fellows! I would like to ask you today a few questions. 1. Would it be worth to buy a 2K monitor 27" 144hz 1ms over a fullhd 144hz(or 144-240hz) 27" 1ms one? I have a maximum budget of 375USD for one and i am going to mainly play LoL, Fortnite, Cs go and occasionally nfs, apex and other such games that can be played on a higher resolution. The thing is that i pay around 100-125usd more for a 2k monitor and im wondering whether it is worth it or not. I browse google a lot if it s an essential fact you guys need to know. And another question would be: should I buy a VA monitor? Are the colors much better than on a TN display, from what ive heard tn's have a pretty bad reputation when it comes down to colors,also , does gsync really make a difference over freesync if im running a nvidia gpu? Idk man

As far as VA vs TN panel goes, i can say that VA panel has much better color accuracy than TN panel. I've used both panel monitors; 1080p, TN panel, 60 Hz, 1ms and 1080p, VA panel 144 Hz, 1ms (latter is my current monitor). Performance wise, my new VA panel is better due to much higher refresh rate but what i most like about VA panel is much better colors it displays.

And lastly, some may say that G-Sync gives the best gaming experience since your GPU frame rates are synced to your monitor refresh rates. I didn't find the premium price of G-Sync to be enough to basically pay double for my monitor, so i went with Freesync monitor. And while i have Nvidia GPU and can't use monitor's built-in Freesync, what i can use and also am using is Nvidia Adaptive Vsync.

I also did several tests with different vertical synchronation technologies i have available. Here's the results (just expand the quote):

For Unigine Heaven, i used lowest settings @ 1080p fullscreen to get FPS high enough for testing.

So, to answer your question: Yes, newer Nvidia drivers do allow the usage of Adaptive Vsync with my 144 Hz MSI monitor and GTX 1060. 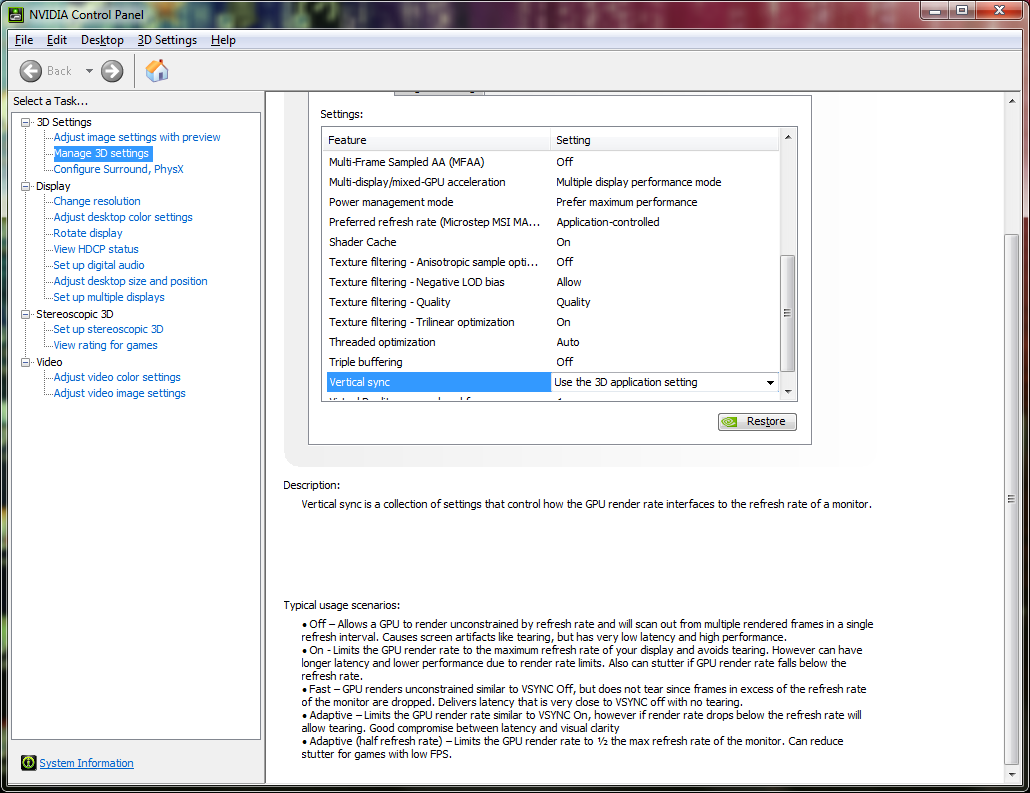 With GTX 1080 Ti, 1080p monitor would be waste of GPU's performance. Here, i'd be looking towards 1440p (2K) or 4K monitor. But since proper (144Hz) 4K gaming monitor costs a fortune, best option would be 1440p 144Hz monitor. Also, it's next to impossible to tell a difference between 144Hz and 240Hz monitor. Even i have hard time telling difference between 60Hz and 144Hz but then again, i don't play fast-paced games.

That being said and considering your budget ($375), you have few options;

But since you play mostly fast-paced games, TN panel and it's very short response time would be more beneficial than prettier colors of VA panel. 4ms response time VA panel is better suited for slow-paced games where input lag isn't that important and you actually have time to enjoy the better color accuracy.