Just got 5600x and i am using hyper 212 evo, was testing it in apex and i unlocked frames, the cpu was having max temp
cpu tctl/tdie around 85c, similar like Cpu die (average) 85c.
Are those okay temperatures with my cooler?
My room temp is without air conditioning 32c+ while using it around 25/26c.

Hyper212 is a 140w cooler with mediocre efficiency. The stock Wraith cooler is 130w with slightly worse efficiency. Intrinsically, there's not much difference between the two, the Hyper212 being slightly better, slightly cooler, somewhat quieter. So normally, swapping from stock to Hyper212 would show some gains.

You moved from a 2600 to a higher power output 5600x, so temps will be higher, but even with the slightly better cooler, temps aren't going to be fantastic, won't be as good as the 2600.

You can mitigate some of that by undervolting or moderating power requirements.
0
G

@Karadjgne
Oh really? Back in the day when i used stock cooler on 2600 and after i upgraded to hyper 212 i got like 15-20c decrease in temp if i can recall.
So you think those temps are normal right now? keep in mind that my room temp is 32c.
0

Your temps in general should be similar if only the CPU has changed in the config. When placing the cooler, what paste did you use, and what method did you use to apply it. The high temps could be as a result of bad spread on the thermal paste, or the cooler isn't exactly flush and seated correctly.

Your ambient temps are very warm. You can expect the CPU to run about 10-15c over ambient at idle. This could also be why your temps are higher than you might expect.
0
G

@keith12
I used some cooler master paste that i got in box with cooler (which is 2.5 years old) i used on finger and gently spread accros whole Cpu without fat layer so it does not get on mobo. It seems to me that sits like it should, yeah i guess my ambient temp is what make problem, now i am using chrome only and i get
CPU die(average) - minimum 38c, max 68c, average 45.
0

gagi4253 said:
@keith12
I used some cooler master paste that i got in box with cooler (which is 2.5 years old) i used on finger and gently spread accros whole Cpu without fat layer so it does not get on mobo. It seems to me that sits like it should, yeah i guess my ambient temp is what make problem, now i am using chrome only and i get
CPU die(average) - minimum 38c, max 68c, average 45.
Click to expand...

So for spreading the paste, it's possible it's not a good application (and I don't mean to be rude at all). For the most part , the best method for a CPU is to use the 'pea sized' dot. You put a dot the size of a pea (roughly) on the CPU IHS. Then when you replace the cooler, you do so in a criss-cross pattern. So from one diagonal to the other. This will ensure an even spread of paste across the CPU as you tighten the screws.

It's worth checking to be sure. Cooler Master Gel can be good. Do you know the exact model paste? Other Decent ones are Arctic MX4/Mx5/Noctua NTH1/Geilid Extreme, TG Kryo among many other good pastes.
0
G

@keith12 I always used this way to apply cpu paste and all cpu's worked perfectly... That is not the case, after more testing i realized its weird af.
I get like 73c (max) while playing apex, then when i alt tab and just browse chrome it spiked for second up to 81c(max). Its some weird boosting thing, but i think i turned off precision boost overdrive in bios, (I've done that back on 2600)
0

Not exactly. TDP is just a rating for stock/aftermarket cooler sizing now, basically.
The real constraint is in PPT of 88w, TDC of 60A and EDC of 90A for the 65w rated AM4 cpus.
The 5600x is higher performance than the 2600, the memory controller can run hotter, but generally the temps should be close since the 5600x is also much more efficient than the 2600, which offsets the difference. They both hit @ 75w when pushed. Given the same restrictions in bios, which may or may not happen depending on Op's settings with PBO, standard or Performance modes, motherboard software like MSI Dragon Center etc. The MSI Godlike mobo has PBO limits of 1000w, 460A, 690A for instance, so even with the efficiency of the 5600x, it stands a really good chance of fully exceeding a 140w cooler ability to keep temps in check.
0
H

gagi4253 said:
@keith12 I always used this way to apply cpu paste and all cpu's worked perfectly... That is not the case, after more testing i realized its weird af.
Click to expand...

If you spread it all around, it shouldn't have been a problem. However, the 5600X isn't in a typical "die in the center" arrangement, it looks like this: 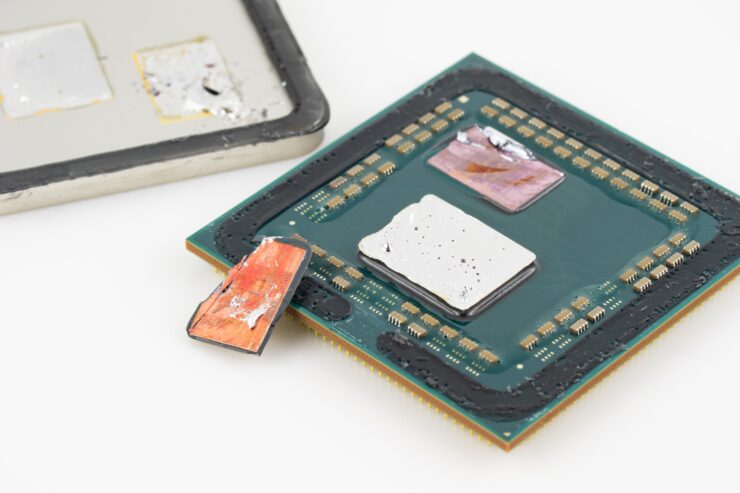 ^this. The larger die is the cores, the smaller is Lcache and more, infinity fabric (fclock etc) is what's used for communication between them. They are spread out to minimize heat transfer between them, so overall allows the cpu to run harder but less hot overall.

For Ryzen, it's best to spatula/credit card spread a thin layer over the entire IHS as the chiplets are close to edges and corners which the pea method that worked well with the monolithic Intels, fails at.
0

Here's a rough guide of where your temps should be with different types of load: AMD Prism vs Hyper 212 black | Ryzen 5600x - YouTube

Obviously as others have mentioned, there are variables, so it's not meant to be exact, but rather a guide. Your system is unique, so some variable might effect your CPU more than others.

As I mentioned, all things being equal, and with only swapping out the CPU, you should have had very similar temps to the older CPU.

In terms of the paste, there are a few different methods: Pea size, Line, Spreading the paste.

Best method is spatula or credit card spread, don't fool yourself. It's the Only way to guarantee that there is paste across the entire IHS, no air pockets and an even amount that won't push out the sides or corners.

Any other method is simply lazy guesswork. Because of Ryzen multiple chipset layout, pea size or line method Do Not Work. Those methods only apply to Intel with its monolithic die centrally located. This is especially true of the larger Ryzens like the 3900x, 5800x3D, 5900x, 5950x etc where both sides of the IHS are packed to the edges and corners.

Pea and line methods almost always make a circular/oblong paste pattern which 9/10 times doesn't make the corners, or even the edges at times if enough paste isn't used. If enough is used, the paste always flops over the edge and then you run the risk of it siphoning into the socket and creating non-contact issues with the pins.