Question A really weird bug, can someone explain why this is happening?

So. For about one and a half month now, i have been struggling with an issue where shadowplay can't record in 60fps, it records in 52,75fps and stuff like that. I did everything i could to try and find the culprit. Like reverting back to older drivers, reverting back to older versions of geforce xperience, uninstalling recently installed apps. And so on and so on. And by doing some of these things, i also had to reboot the computer, and it was hard to say what did what, but at times shadowplay was back at recording at 60fps, but then suddenly, back at 53,45fps and so on. It even dropped as low as 43 fps once.

I have used Shadowplay since 2013, and i have never had an issue like this until now. But i have noticed something that might be the cause.
A few months ago i upgraded the BIOS on my ASUS RTX 3070 OC DUAL to support Resizable Bar. After i did that, and enabled Rebar in my motherboard bios, i can no longer enter bios with that GPU. I had to enable the built-in GPU on my CPU to see the BIOS. Once Windows was loaded, the RTX "wakes up" and worked perfectly fine, but it can't display BIOS. For the record, i haven't tried to disable Rebar in BIOS again, i just learned to live with it.

But. After i enabled the built in GPU in the CPU, which i had to do in motherboard BIOS, to even be allowed to see it, this is when i think this shadowplay problem started to exists.

When i go into screen configuration in Windows there is something odd at display. 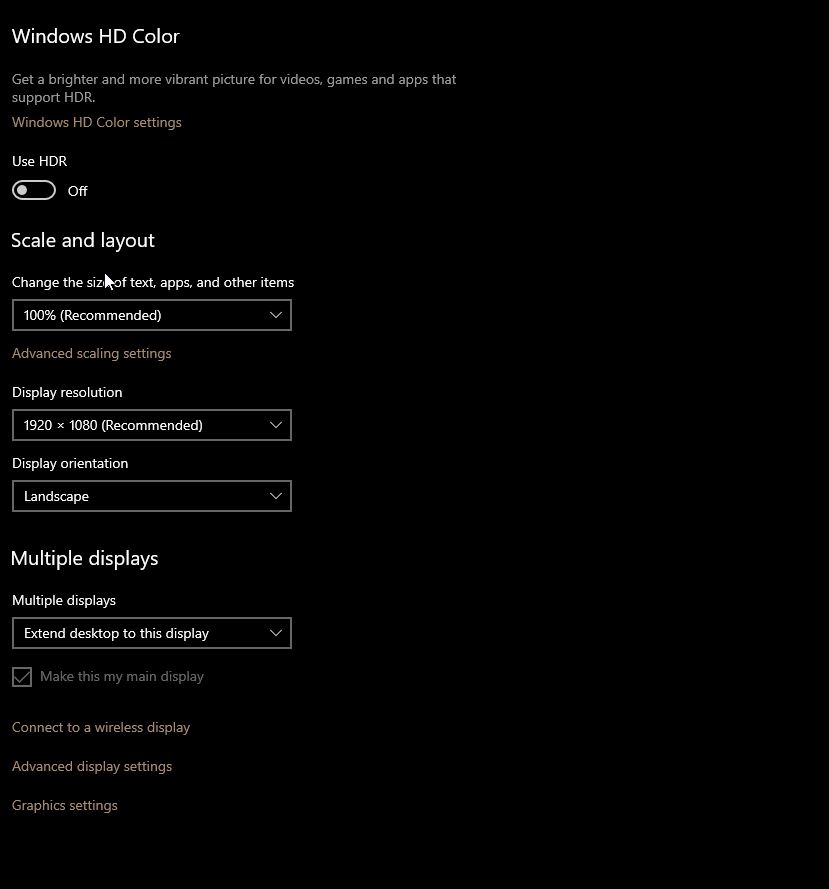 Notice how the Multiple Displays says "Extend desktop to this display". Even though, there are no other displays activated. I have noticed that the shadowplay fps issue only happens when this is the case.
If i reboot my computer now, with my TV NOT connected to another slot on my RTX3070, the shadowplay fps problem is gone, and the Multiple Display says "Show only on 2".

Is this a really really weird bug, or does anyone know what is going on here?
0

do you just get a blank screen on the bios if you try to go in via GPU?

did you disable CSM in bios? - link

Thank you for your reply. Yes the latest drivers and yes only a blank screen. And no i did not disable CMS, i will try that now. If that doesn't work, and i chose the RTX as primary GFX card in BIOS and reboot, i have to remove the card from the slot again so that the CPU-GPU activates by default again.
0

its a link i found referred from another spot so it should work.

You might want to disable the onboard once you know it works right, it might be why you get that odd behaviour from the multi screen selector. I can't find anything similar

which version of win 10

running 2 screens does effect shadowplay, the odd thing is I wonder where its sending the other signal.
DO you normally have 2 screens? tv and?

what monitors show on the Advanced Display Settings tab when its showing extend? 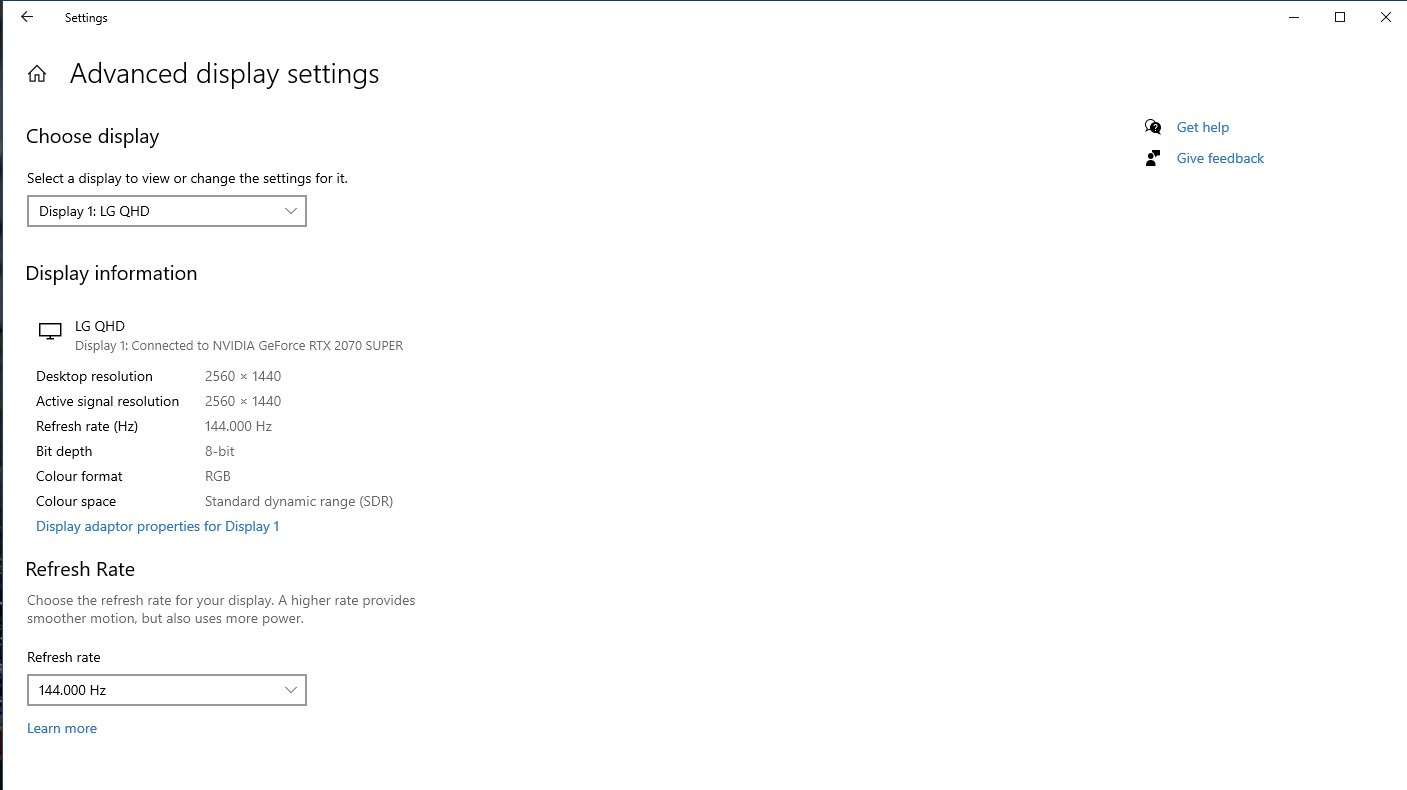 maybe try running DDU in safe mode and reinstall Nvidia drivers and see if it makes any difference - https://forums.tomshardware.com/faq/how-to-perform-a-clean-install-of-your-video-card-drivers.2402269/
0
T

I'm right now on 20H2 version of Windows.
Some times I'm running second screen on LG C9 to watch movies and such, but in this case, when it's not on, and not been used, it should not affect anything. As i said this is really weird, i suspected it's a bug related to having the internal GPU enabled, which i had to because of BIOS. But once in Windows, i kinda don't need it anymore, but it's there, activated. And it causes some weird stuff.. As giving me that "extend desktop" message though there anren't any other displays connected.

But anyways. Now i have disabled CSM in BIOS and i chose primary display to PCI express 1 again. Now i could see the BIOS on my RTX 3070 again. YAY! Thank you!
And once booted into windows, i can no longer see the internal GPU in device manager either, so now I'm very hopeful this has fixed my issue once and for all.

I'm almost certain this problem is linked to the internal GPU being enabled, and it causes a rare bug of some sort in windows itself. I will keep using shadowplay in the days to come, and see if i ever drop beneath 60fps again. And i will try with my C9 connected and showing Desktop as well while playing and recording, to see if it affects it in any ways, it has never done so before at least. It's just after rebar and the fact i HAD to enable internal GPU the problem started. But i can't be 100% sure.

Anyways, thank you for your help so far. One problem was fixed at least, let's see if this fixes all the others as well
0

It sounds like the BIOS update caused the problem.
0

Now both windows and BIOS default to GPU it might remove the extended thing, it could have been cause desktop was loaded running one and swapped to other. windows might still have the intel as default is some obscure part that only affected screens. It seems odd though if it happened while screen was attached to GPU

its more turning rebar on and having a 3070, and not disabling csm.
that in turn led to enabling IGPU which might have led to confusion in windows
0
T

Colif said:
its more turning rebar on and having a 3070, and not disabling csm.
that in turn led to enabling IGPU which might have led to confusion in windows
Click to expand...

haha. To be fair, this sounds exactly like the kind of problems i get on computers. Never an easy one, just superweird stuff that i can't even start to wrap my head around.
0

Only problems I ever get I haven't seen before either, and I answer questions in here...my last 2 were caused by old parts dying, speakers & mouse. They were weird and I took several months trying to work out the mouse problem as it wasn't obviously a mouse problem. It was making other parts of PC play up instead. Now oldest part is 4 years old so I don't know what my next problem will be caused by.
You must log in or register to reply here.
Share:
Facebook Twitter Reddit Tumblr WhatsApp Email Link