I bought an additional 32GB of new and identical Samsung RAM for a total of 64GB (and 4 sticks). 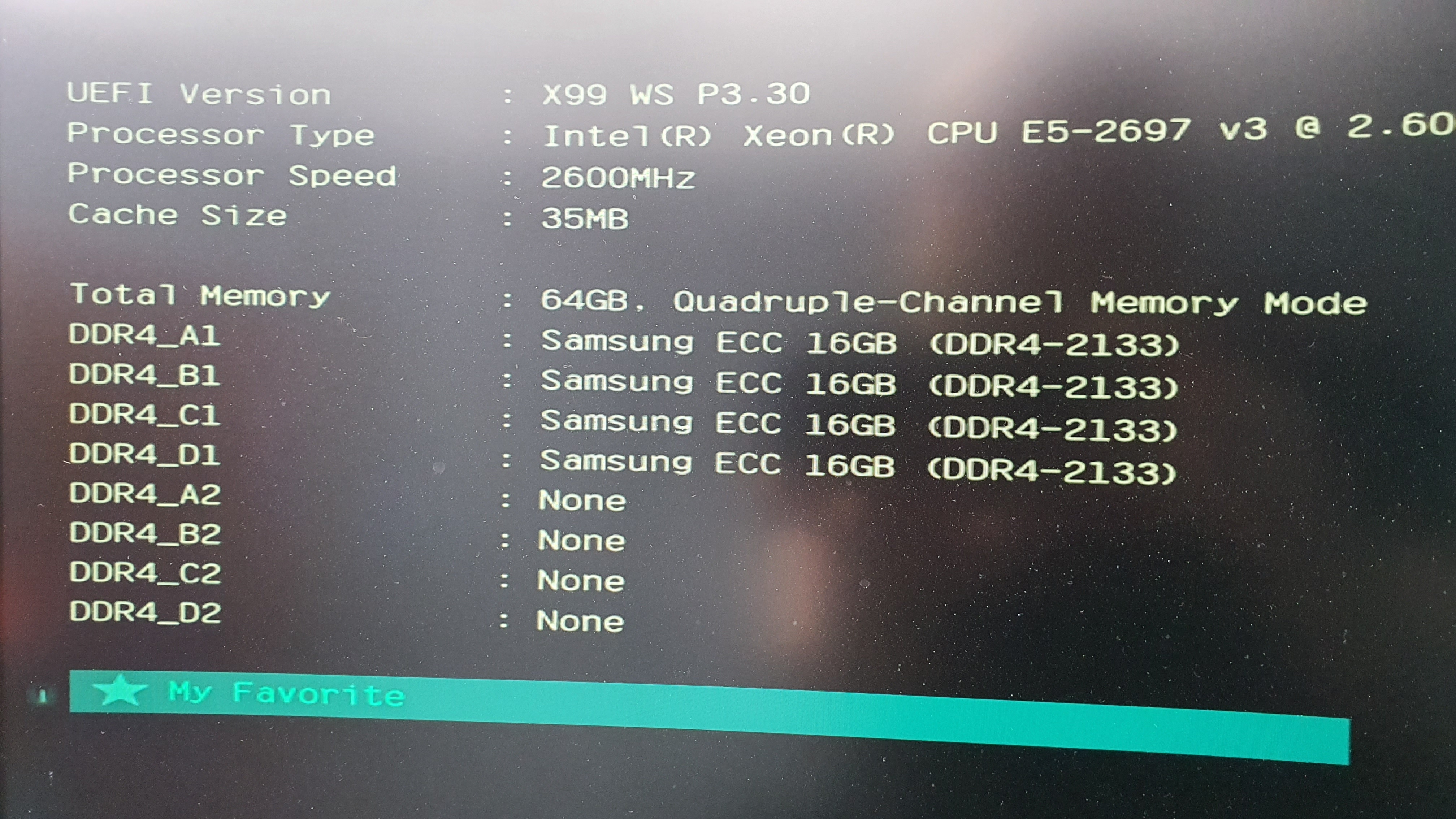 The problem is I could never get Windows to fully load. It always freezes as the Windows screen appears after the little loading circle animation goes around a few times.

So, I tried only 48GB, with the new RAM in C1. On my first attempt, it loaded Windows and I went to the System screen in the Control Panel and verified 48GB of RAM was visible. Then suddenly it just rebooted without warning. I tried a few more times and I would get to the login screen and then after a few seconds, it would just reboot again. There's no warning when it does this, it's like the power went out apart from it immediately rebooting.

The RAM is brand new and from a reputable dealer, but I ran memtest to see if it would show anything. I only ran it with 48GB, since that is what was in there, and there were no errors at all. The RAM is fine.

I tried one more time to boot after running memtest and it crashed (rebooted) maybe 30 seconds after the Windows login screen appeared.

I removed the new 16GB stick from C1 and rebooted with the original 32GB and everything works perfectly.

Does anyone have any ideas as to what I can try next to get this working? I really appreciate the help.
0

Do you have the motherboard's User Manual?

(Do verify that I found the applicable manual.)

Read through the entire User Manual first and compare your build's configuration to what is required.

Pay attention to the fine print and any footnotes. There may also be references back to the manufacturer's website. Check those references as well.

Yes, it's the correct manual. Thank you.

I will try again and see if any Dr. Debug codes are displayed.
0
M

There are no Dr. Debug codes displaying when it crashes at all. It seems to boot fine. It's Windows that seems to be the problem.

I did make a change to the Power Plan in Windows. I changed it to High Performance making sure PCI Express > Link State Power Management Settings is set to Off. Previously it was set to Moderate power savings and the profile was "Balanced."

Then I shut the computer off, added back in one new stick of RAM (total 48GB) and turned it back on. That seemed to do something because Windows loaded and didn't crash. The new RAM was recognized by Windows but everything was running very slow. I checked the task manager and the CPU was pinned to 100%. "System" was the task using most of the CPU and I saw "system interrupt" listed quite a bit.

It eventually slowed down a little, but it was never less than 72% and mostly 90-100%. I shut the computer down and restarted again. This time it froze on the Windows startup animation. The animated circle stopped spinning and I had to hold power down a few seconds to shut down.

Then I tried to start it one more time and it seemed to work! Windows loaded, the CPU use was normal, and Windows recognized the new RAM. I decided to just leave only the task manager open and walk away from the computer for a little while to see what happens. When I came back a few minutes later the screen was completely frozen. Everything appeared normal, task manager was there and the computer looked like it did when I left it, but nothing worked. Even unplugging and plugging back in the keyboard and mouse did nothing.

I shut down, pulled the new stick of RAM and rebooted with the original 32GB and everything is working smoothly.

To be clear, there is never a BSOD. The screen just goes black and off and restarts or it freezes.
0

You still have diagnostic tools available.

Start with Reliability History to look for error codes, warning, and even informational events that correspond with the BSODs.

Event Viewer will provide information as well but is not as user friendly.

And remember to use Resource Monitor to view system performance. Compliments Task Manager in some ways. Just use one or the other - not both together.

How old is the PSU? Has it been used for heavy gaming, applications, or bit-mining?
0
M

The PSU is 5 years old. I don't use this workstation for gaming. Mostly video editing and graphics. I've never done any crypto mining.

To be clear, I have never gotten a BSOD from this. It either goes black and reboots or freezes.

Also, it is a bit more stable when I add 1 new stick of RAM (total 3) vs 2 (total of 4). I have successfully ran windows a few times, albeit very briefly, with 3 sticks of RAM and it would always freeze on the Windows loading screen when I tried to boot with 4 sticks.
0
M

Reliability History didn't show much. 2 critical events yesterday. One was some AudibleRT.WindowsPhone.exe stopped responding and was closed. I'm not sure if this one corresponds with an OS crash or not. The other was with "Windows" and all it says is, "The previous system shutdown at 9:32:19 PM on ‎4/‎11/‎2020 was unexpected."

There was a bluescreen critical error from the day before yesterday that has more details:

I do think this corresponded with a crash.

There are also some LiveKernalEvent 141 errors from earlier in the week before I tried to do the RAM upgrade. There are 3 of these on the 8th and 2 of these on the 7th. I was having problems with an app running out of memory (Davinci Resolve Fusion - Paint) during this time. That is what got me to put in the additional memory.

Description
A problem with your hardware caused Windows to stop working correctly.

Update: I did manage to boot into Safe Mode with 48GB of RAM installed and it did seem to work. I guess the next step is to reinstall Windows?
You must log in or register to reply here.
Share:
Facebook Twitter Reddit Tumblr WhatsApp Email Link