Question After changing thermal Paste of my CPU, my GPU no longer gives signal

So i decided to change my thermal paste, it was very hard so i had to apply some force to remove the CPU Fan (Stock Intel) it was my first change of thermal paste so didnt know exactly how to once again install the fan, now i know... but back then i didnt know that you needed to pull the pins and then turn right, so i kind of forced it breaking the plastic pins.

I tried the following.

1.- Re-seating it, i did it at least 5 times while trying to fix the problem, pretty sure all of the pins in the PCI-E port are ok, i dont see any dust on them.

3.- My PSU is 500W Bronze and my GPU has always worked before this incident, so i rule out any issues with PSU.

4.- The same could be said for cables and monitor. Using same cables (HDMI and VGA{used DVI/VGA Adaptor}) my integrated gpu works fine.

6.- Device Manager doesnt recognize anything else than the integrated GPU

7.- In Bios (mobo: ECS H67-H2-M3) i look for any setting that would indicate usage of Dedicated GPU over iGPU but i can´t find it yet.

8.- Haven´t tried a MOBO reset, idk how that would help.

9.- I dont have another GPU to test in my computer, nor can i use another computer to test the GPU.

Im pulling my hairs here, could i have damaged the motherboard while changing thermal paste? 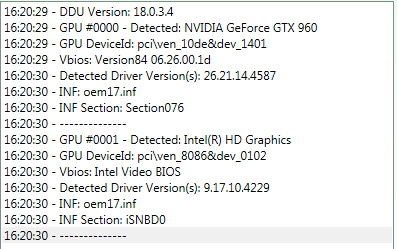 is it saying that it detected a driver or the GPU itself? idk why since i deleted every nvidia driver in an effort to fix the problem.

Have you tried seating the GPU in other PCI-E slot? if doing that also doesn't make a difference and the GPU fans/lights turn on fine, it could be that you somehow damaged the GPU.
0

Zer0123 said:
Have you tried seating the GPU in other PCI-E slot? if doing that also doesn't make a difference and the GPU fans/lights turn on fine, it could be that you somehow damaged the GPU.
Click to expand...

I don´t have any other PCI-E slot, i just can´t believe i damaged it since i never touched it during the thermal paste replacement.
0

Well at this point I would only assume that the mobo/slot was damaged during the heatsink removal process. I would personally narrow it down to either the mobo or the GPU being damaged. And as the situation you mentioned doesn't leave much room for troubleshooting, I suggest taking your case to a PC service shop for them to troubleshoot it for you.
And please, from now on, do proper research before attempting any DIY process. They might not be complicated, but even the most trivial of things can be catastrophic if not done right.
You must log in or register to reply here.
Share:
Facebook Twitter Reddit Tumblr WhatsApp Email Link