It appears that AMD has just confirmed that it plans to launch three Zen 4 'Ryzen 7000' products which will include Raphael for desktops, Dragon Range for high-end laptops, and Phoenix for light-gaming laptops.

During its Q1 2022 Financial Results, AMD provided its latest roadmap which provides an update on its roadmap plans for 2022-2023. It looks like AMD's Zen 4 core architecture will play a crucial part in powering not just one but at least three client platforms including Raphael for enthusiast desktops, Dragon Range for Extreme Gaming Laptops, and Phoenix for Thin & Light laptops.

The first platform to get the AMD Zen 4 treatment will be Raphael. The 5nm Zen 4-powered chips will be aimed at the enthusiast desktop segment based around the brand new AM5 platform that offers both DDR5 and PCIe 5.0 functionality and with TDPs starting at 65W and above. The Raphael desktop CPU platform is expected to launch in 2H 2022. 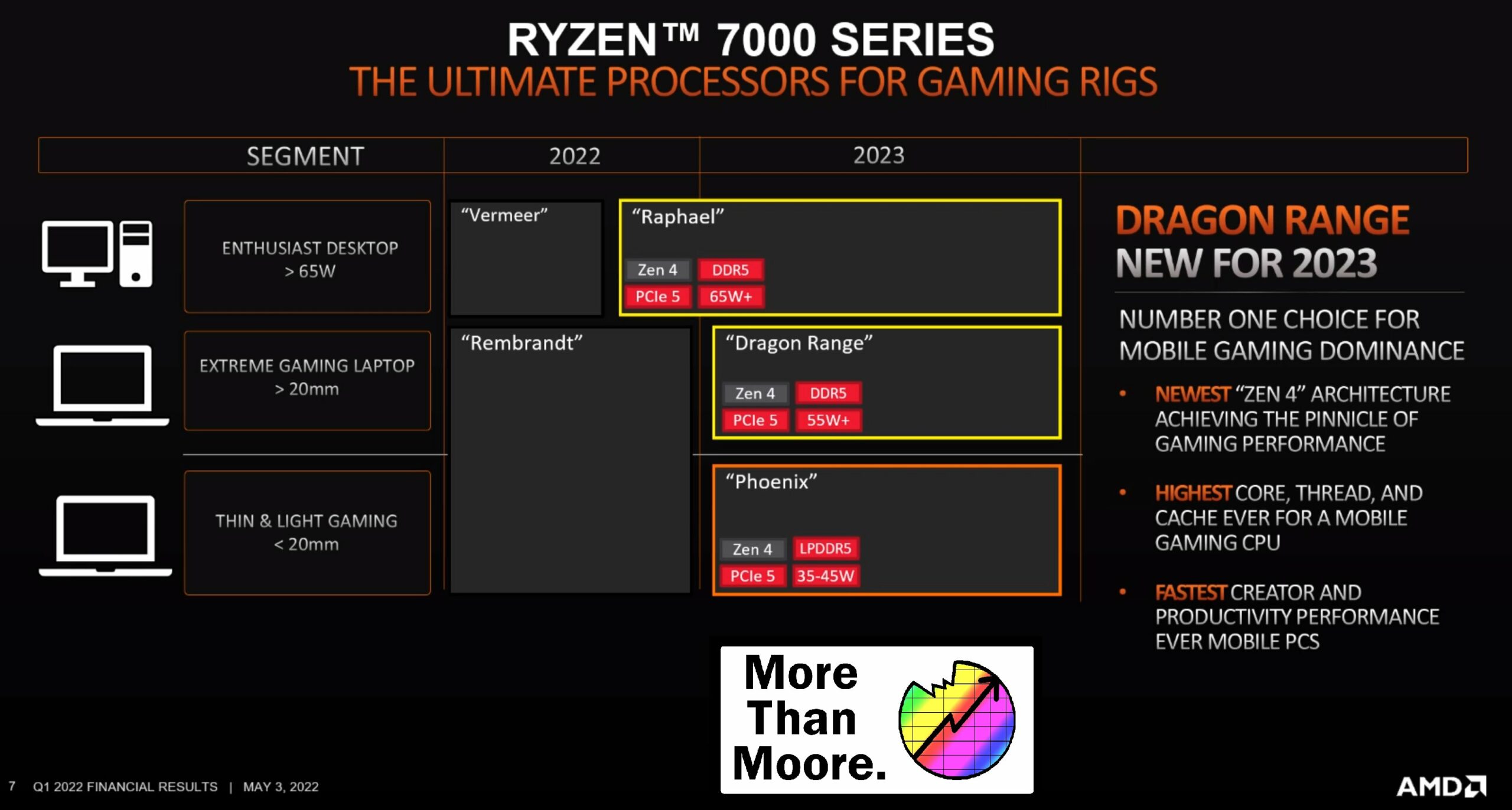 A brand new Zen 4 product has been confirmed today and that is Dragon Range. It looks like the new Dragon Range APU lineup will be aimed at Extreme Gaming laptops with sizes above 20mm and based on what AMD has stated, these will bring the highest core, thread, and cache ever for a mobile gaming CPU. These will also include the fastest creator and productivity performance ever for mobile PCs. The new Dragon Range lineup will also be DDR5 and PCIe 5 compliant and feature SKUs above the 55W range.

Lastly, we have AMD confirming its Phoenix APU lineup which will utilize both Zen 4 and RDNA 3 cores. The new Phoenix APUs will carry LPDDR5 and PCIe 5 support and come in SKUs ranging from 35W to 45W. The lineup is also expected to launch in 2023 and most possibly at CES 2023. AMD has also pointed out that the laptop parts may include memory technologies aside from LPDDR5 and DDR5.

Based on earlier specs, it looks like the Phoenix Ryzen 7000 APUs might still carry up to 8 cores and 16 threads with higher core counts exclusive to Dragon Range chips. However, Phoenix APUs will carry a higher CU count for the graphics core, uplifting the performance by a huge margin over any thing that the competition might have to offer.

All three parts will be branded as Ryzen 7000 series. Currently, that's all we know so far but one can expect more details from AMD at Computex 2022.

That's nice but I'm not rushing again like I did with first 1600x (was only Ryzen available to me at that time). Had to go thru several upgrades in rapid succession, 1600x > 1700x > 2700x> 3700x to get satisfactory results. Part of it was due to x370 chipset and bad memory handling that was fixed with 400/500 series chipset.
After"suffering" with FX 6350 and 8350 for few years I was on the verge of getting Intel as I had a near deadline to finish my last project using ACAD before retiring but FX was pretty bad bottleneck for simulation. 1600x gave me 3-4 times performance boost and job was finished using 1700x.
Although 3700x is now doing fine I'm going to soon switch to 5700x/5800x or even 5900x (didn't make my mind yet) and without any more changes wait out couple of years while dust settles specially with DDR5 and GPUs.
0

CountMike said:
After"suffering" with FX 6350 and 8350 for few years I was on the verge of getting Intel
Click to expand...

Same here. Even I once used the FX 6300 CPU for my gaming needs, but little did I knew at that time, that this was a very weak CPU which created serious bottleneck when paired with powerful high-end and mainstream GPUs. All thanks to the Piledriver Core architecture.

I upgraded to the core i7 4790 after that, and gaming was like a breeze on my PC. I'm still using this 4'th gen CPU, and I know it's still not as powerful as the latest gen Intel and AMD CPUs, but for 1080p gaming, it was a good choice. I don't do any rendering or any animation/3D modelling, just light gaming, and the core i7 4790 is still doing a pretty job at AAA gaming.

Using an RX 480 GPU right now, and I'm itching to upgrade my whole rig, but can't seem to make up my mind yet. But will it be really worth an upgrade remains a big question, which at times can be subjective. I would have to do a complete overhaul of my PC if I want any of the latest gen processors.