AMD graphics card shipments were up in Q4, according to Jon Peddie Research. But coronavirus may hurt the entire market.

I certainly wasn't expecting such progress from Intel. Look at the colors now.
They own 63% of the total PC GPU share! Even AMD owns more than nVidia - 19% vs 18%.
nVidia really must've dropped the ball. Maybe that 3.5GB GTX 970 from years ago? LMAO. 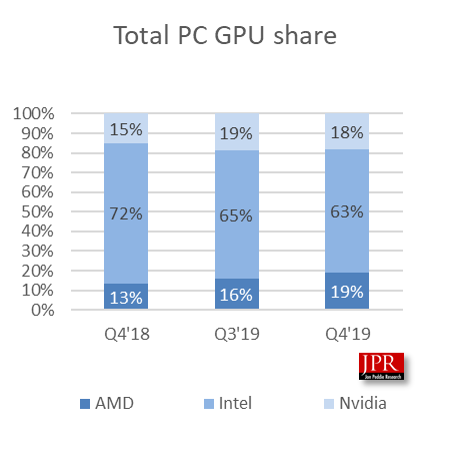 Lol, maybe the author does not understand the graph?
"Despite this, Nvidia still maintained dominance in Q4 2019. It represented 63% of market share compared to AMD's meager 19% and Intel's 18%."

Additional note: The provided data isn't easily to use, because JRP takes everything with a GPU into account, therefore all APUs (and in this context, almost every Intel consumer/desktop CPU is an APU because most of them have an iGPU) and also add-in boards.
Furthermore, JPR analysed for 3Q19 and AIBs a share of 73 % for nVidia and 27 % for AMD.

So, over all, Intel theoretically is the GPU market leader, but with regards to only AIBs nVidia is still the absolute market leader.
One additional note: There's not much to use from JPR, because their main intention is to sell their report for 2750 US$, so they are very careful not to uncover relevant numbers from their analysis, but one still should be available:
The report states "quaterly shipments", therefore quantities, every Intel-releated component is a CPU, because Intel currently does not sell discrete GPUs, the number of low-end Xeons E's possibly can be ignored? Therefore with 93 Mio. units total in 4Q94, they assign about 59 Mio. CPUs in 4Q19 to Intel, almost all of them for the desktop and mobile market.
Last edited: Feb 27, 2020
Reactions: bit_user, Makaveli, TJ Hooker and 1 other person
M

3ogdy said:
I certainly wasn't expecting such progress from Intel. Look at the colors now.
They own 63% of the total PC GPU share! Even AMD owns more than nVidia - 19% vs 18%.
nVidia really must've dropped the ball. Maybe that 3.5GB GTX 970 from years ago? LMAO.

The reason for that is because of OEM sales and guess who sells the most intergrated graphics?

NV has more cash than AMD so they aren't hurting one bit.

And this is good news for AMD.
Reactions: 3ogdy

2020 is going to be a game-changer with Intel’s entry into the discrete GPU market and a possible fourth entry by an IP company.
Click to expand...

Who? Imagination? ARM? Qualcomm? VIA/S3? Vivante hasn't seemed to be active, lately, but then China will need a homegrown GPU, so maybe it's being re-invigorated?
You must log in or register to reply here.
Share:
Facebook Twitter Reddit Tumblr WhatsApp Email Link