Probably a pointless question, but I assume the 16GB are dual-rank... I would be curious how 16GB single-rank (which I understand exist, but are the minority in the market) modules would perform in the 128GB configuration? Probably no difference, but might be worth exploring with a few select benchmarks, if possible.

hate to be that guy but, it's not actually the first PCIe 4.0 capable workstation on the market, that honor goes to the Talos II Secure Workstation

Talos™ II is the world's first EATX-compatible, workstation-class mainboard for the new, free-software friendly IBM POWER9 processor and architecture. POWER is the only open, owner-controllable architecture that is competitive in performance.

I love these, especially the 12-16 cores at 4GHz, much closer to 5900 and 5950 for lightly threaded workloads. Great solution for those wanting expandable server and workstation features.

I like the look of those Raptors too, especially the pci-4 and memory bandwidth. May get a Blackbird for testing and open source (mostly) fast hardware. See Phoenix coverage Part 2— the first were not as promising.

For Threadripper Pro, has there been any information about the socket and CPU upgrade path?

My main concern is the upcoming release of Zen3 Threadrippers. I imagine there will then be a Zen3 Threadripper Pro in a couple quarters or a year from now. The memory and pci expansion makes this an excellent platform for future growth.

Since AMD has been forward looking by using the same socket for Ryzen, is it safe to expect the Zen3 TRPro will be accepted in this new socket?

... the most powerful workstation chip on the market - it's 64 cores easily outweigh Intel's
Click to expand...

Also, do I misunderstand the article, or has Toms yet again pronounced a verdict on a product they as yet haven't seen, or has even been released?

Mandark said:
Intel has nothing to touch the thread ripper so there’s nothing wrong with that statement
Click to expand...

Fantastic! I like them very much.
Picking a Threadripper Pro 3975WX, 128 GB RAM, some SSD, some NVidia GPU and make a virtual desktop infrastructure for computer-aided designing.
You can host 4-6 virtual desktops quickly.
S

Hey in your benchmarks, can you include compilation of the Unreal Engine editor?
The engine is quite taxing on the cpu both c++ and the shaders.
Most people that are alone struggle with it. If you work in studio you can share cores, but at home alone

But I just discovered something interesting that you missed in the review:

If you install six (6) dimms, applications like AIDA64, CPU-Z, etc. will recognize it as "hexa" channel, but benchmarks will reveal that the actual memory throughput is equivalent to merely dual-channel.

So you can populate four or eight DIMMs, but be careful with six.

For my application, I started a 3955WX with 4x64 GB RAM. I discovered that wasn't enough, so I upgraded to 6x64. My application now had enough RAM, but performance declined. So I had to upgrade to 8x64.

@mikewinddale In my testing it is even worse than sticking to 4 or 8 populated channels. Anything less than all 8 channels has a significant impact on performance. The hardware setup for these tests was: 3995wx, ASUS Pro Sage, 256GB 3200MHz, writing to 4 x Samsung 980 Pro in RAID-0. Interesting is that while throughput dropped, meaning that technically the system is doing less work, the CPU utilization increased when all 8 memory channels weren't populated. I do wonder if the different channel-to-chiplet affinity between your 16-core and my 64-core model is responsible for why you don't see as big of a hit as I do with only 4 channels populated. 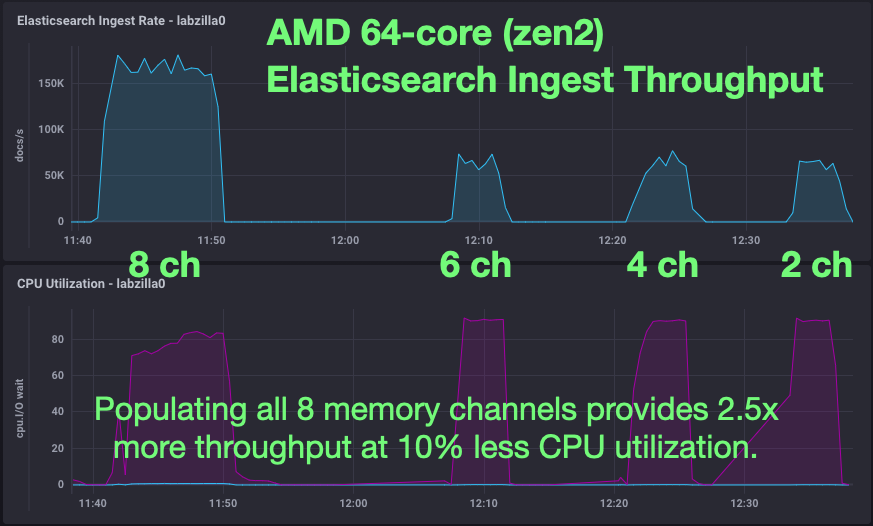