Alright, this shouldn't come as a surprise, but we have some sort of confirmation on AMD's new tech for it's upcoming AM5 ZEN 4 CPU platform. Just recently few days back, HWiNFO reported that it was bringing AMD RAMP support to the latest version of its monitoring software.

At that time, it wasn't very clear what was this tech actually about, but now thanks to a recent Forum Post, via ComputerBase, it's now confirmed by the developer that AMD RAMP is a DDR5 acceleration technology similar to Intel's XMP.

The technology is just what it sounds, an Intel XMP competitor from AMD. The AMD RAMP tech is said to launch with the AM5 platform and will accelerator DDR5 memory beyond the JEDEC specs. For now, AMD Ryzen desktop CPUs have been unable to catch up to Intel's XMP speeds which are now rated beyond 6000 Mbps. That is expected to change with RAMP (Ryzen Accelerated Memory Profile).

Following are the list of changes coming to HWiNFO soon:
HWiNFO's author and developer confirmed that AMD will be bringing RAMP support with its next-generation Ryzen 7000 Desktop CPUs which will be supported on the AM5 platform. The technology will allow memory makers and also motherboard vendors to work in tandem to offer the best DDR5 DIMM support on their respective products. RAMP would also enable AMD Ryzen CPUs to catch up with the immense DDR5 speeds that Alder Lake currently supports and will further be extended upon with Raptor Lake CPUs which are due around the same time as AMD's Zen 4 chips.

It remains to be seen if AMD RAMP will become an established technology that wasn't the case with AMD's previous attempts such as A-XMP and AMP (AMD Memory Profile). It will be nice to see a memory overclocking standard from AMD that is well established as the team red kicks off its next-generation AM5 platform. 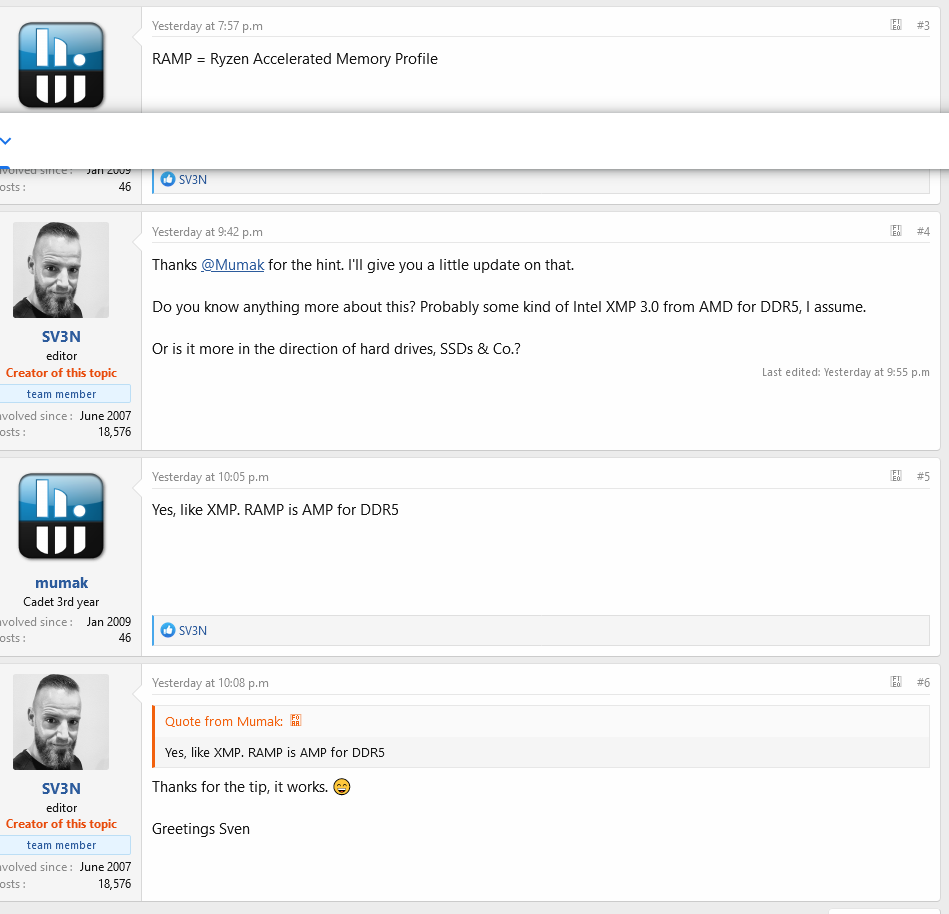 How would that be different from just using the XMP profiles the same as it has for DDR4?

It may be cynical but honestly, I only see this as going badly for AMD. It suggests Zen 4 specific memory kits with "RAMP" profiles may be REQUIRED to get DDR5 that can overclock easily. I suspect they'll be more expensive than DDR5 kits with XMP profiles for Intel since...well...that's the way the market seems to work.

ADDED: actually...if DDR5 has more storage in the SPD (if it's even called that) it might be different. I could see that mfr's might load a couple of XMP profiles alongside a couple of "RAMP" profiles. The BIOS would enable or address whichever is appropriate for the platform. That could be a win-win...the better profile for each user while saving on the number of kits needed on the shelf by retailers. Prices unaffected.

Btw, didn't some of the early DDR4 mem kits had issues with XMP on Ryzen, because the early XMP profiles set timings incorrectly for Ryzen IMC ?
0
H

I get that AMD and Intel's IMCs are different and accept different things, but I feel like having multiple memory profile standards is going to be a headache for people that care about this sort of thing.

And as I understand it, "memory training" that I keep hearing about is more like "let's make sure we can use the memory at the specified parameters." It'd be nice if the system can do a bit of self adjusting where it tries the settings provided and if it can't work with them, start tweaking the timings to something looser until it's satisfied, then save those parameters.
Reactions: KyaraM
0

drea.drechsler said:
ADDED: actually...if DDR5 has more storage in the SPD (if it's even called that) it might be different. I could see that mfr's might load a couple of XMP profiles alongside a couple of "RAMP" profiles. The BIOS would enable or address whichever is appropriate for the platform. That could be a win-win...the better profile for each user while saving on the number of kits needed on the shelf by retailers. Prices unaffected.

We need more info on DDR5 and how we're to use it.
Click to expand...

I picked up in a Reddit forum that DDR5 has space for 5 profiles and 2 that can be over-written by a user. That suggests there may be a way to accomplish this.

Let's hope manufacturers use the space wisely for us.
Reactions: Metal Messiah.
0

Some update on this feature. According to Videocardz's sources, the AMD RAMP feature is now going to be dubbed as EXPO.

It appears like the company has decided to change the name of its XMP competitor, the standard will be known as EXPO or Extended Profiles for Overclocking. AMD filed for a trademark for EXPO back in the middle of February, although it's unclear if it has been granted as yet.

According to information that VideoCardz has been given, EXPO is said to be able to store two profiles for memory overclocking and it'll be exclusively for DDR5 memory. AMD has gone for a novel approach compared to XMP, with the first profile being for high-bandwidth optimized settings and the second for low-latency.

The second profile is apparently optional, which makes sense since not all memory modules can do low-latency. EXPO is also said to be compatible with all types of memory modules, so it might also appear in SO-DIMM modules in the future. AMD EXPO will be able to work with UDIMM, RDIMM, and SO-DIMM which opens up the tech for use in mobile platforms too.

Now what isn't known is whether this technology replaces RAMP (Ryzen Accelerated Memory Profile) which was previously said to be coming to the new AMD CPU platforms or if it is an extension of that. The trademark does reveal that it was filed very recently (February) so it looks like the red team would just end up using this name. Certain monitoring & statistics software have already added preliminary support for RAMP so they might need to update them if AMD switches over to the new EXPO branding.
You must log in or register to reply here.
Share:
Facebook Twitter Reddit Tumblr WhatsApp Email Link