There has been some chatter on the web that AMD's first 3D V-Cache CPU, the Ryzen 7 5800X3D, is rumored to receive a price cut next month when the company launches its latest Zen 4 chips/AM5 platform. I think those gamers who want to upgrade to one of the latest Ryzen 5000 series CPUs might be interested in this price cut/discount, assuming this rumor turns out to be true.

This move shouldn't surprise anyone though, knowing the fact that when companies release next-gen hardware, they have to drop the price of their previous gen SKUs, to remain competitive, and gain some market share as well.

Obviously, the Ryzen 7000 series will offer higher performance than their predecessors, but gamers need to invest in a totally new platform/AM5, and also new DDR5 RAM sticks, which won't be a cheap upgrade. I presume DDR5 memory is still expensive to buy ? So I think this Ryzen 7 5800X3D price cut, makes a lot of sense for those who want to retain DDR4 Mem support, on the AM4 platform.

But anyway, the rumor comes from Greymon55 who states that AMD might be preparing a price cut for its only 3D V-Cache chip, the Ryzen 7 5800X3D. AMD launched the Ryzen 7 5800X3D back in April 2022, and we got to see the benefits the 3D V-Cache had to offer, delivering faster gaming performance that even outclasses the Intel Core i9-12900KS.

Now, five months later, the chip might receive a price cut, though it is yet to be confirmed whether this will be a retailer-specific price adjustment following the launch of the Ryzen 7000 CPUs on the 15th of September, or an official AMD price cut. The AMD Ryzen 7 5800X3D launched at an MSRP of $449 USD, and although the CPU has been out for a while, its price has only seen a $10 drop, down to $439 US at Amazon.

It looks like the 5800X3D is the only chip out of the Ryzen 5000 series lineup that hasn't seen a price cut already, as the other Ryzen SKUs have dropped quite a bit to make some room for the new Ryzen 7000 "Zen 4" lineup.

Now, we can debate whether clock speeds or cache speed matter the most in gaming, but we have already seen the results. The extra 3D V-cache really helps with performance, but the overclocking potential is limited on these chips. Interestingly, the wording used by the leaker claims that Zen 4 gaming performance will be "Amazing".

So it looks like the 5800X3D might end up slightly slower or on par with the Ryzen 7 7700X, and that should prompt AMD and its partners to drop the prices considerably. Hopefully. Though, sprinkle some dose of salt on this new rumor for now.

The other part of the equation is the fact that besides the AMD Ryzen 7000 "Zen 4" parts, the 3D V-Cache Ryzen 7000X3D CPUs are also expected to be introduced later this year.

But the more important question is, will AMD still stick to just 8-core V-Cache parts, or offer something more premium?

I wonder just how much 7600X (or whatever it will be in the Zen 4 stack that slots in at the 5600X position) will trounce 5800X3d in both gaming AND productivity tasks.

Small wonder....and a safe guess... that 5800X3d price will be lowered with Zen 4 also launching next month into a PC market that's retrenching hard.
0

I think the R5 7600X might be able to easily match or even surpass the 5800X/X3D's performance at least in some workloads. Though, in gaming that extra 3D V-cache might bring some additional performance boost, depending on the game. But this remains to be seen.

When it comes to productivity/synthetic workloads, the 7600X seems to offer a higher single-core performance. According to this article, AMD's upcoming Ryzen 5 7600X (6C/12T) processor is up to 22% faster than Intel's flagship Core i9-12900K in single-core benchmarks.

So we can make some guess on how much performance difference can be expected, between the new 7600X CPU and the 5800X3D SKU.

If it doesn't drop below 350€, everyone will continue ignoring it.
0
T

So we can make some guess on how much performance difference can be expected, between the new 7600X CPU and the 5800X3D SKU.

That lead drops significantly as soon as you use more cores than just one, so any difference in gaming performance is still up in the air.
Although against the 5600x the difference remains quite high.

Also the flagship tag is reserved for the best CPU and not for the second best, but I guess 22% sounds better than 17% 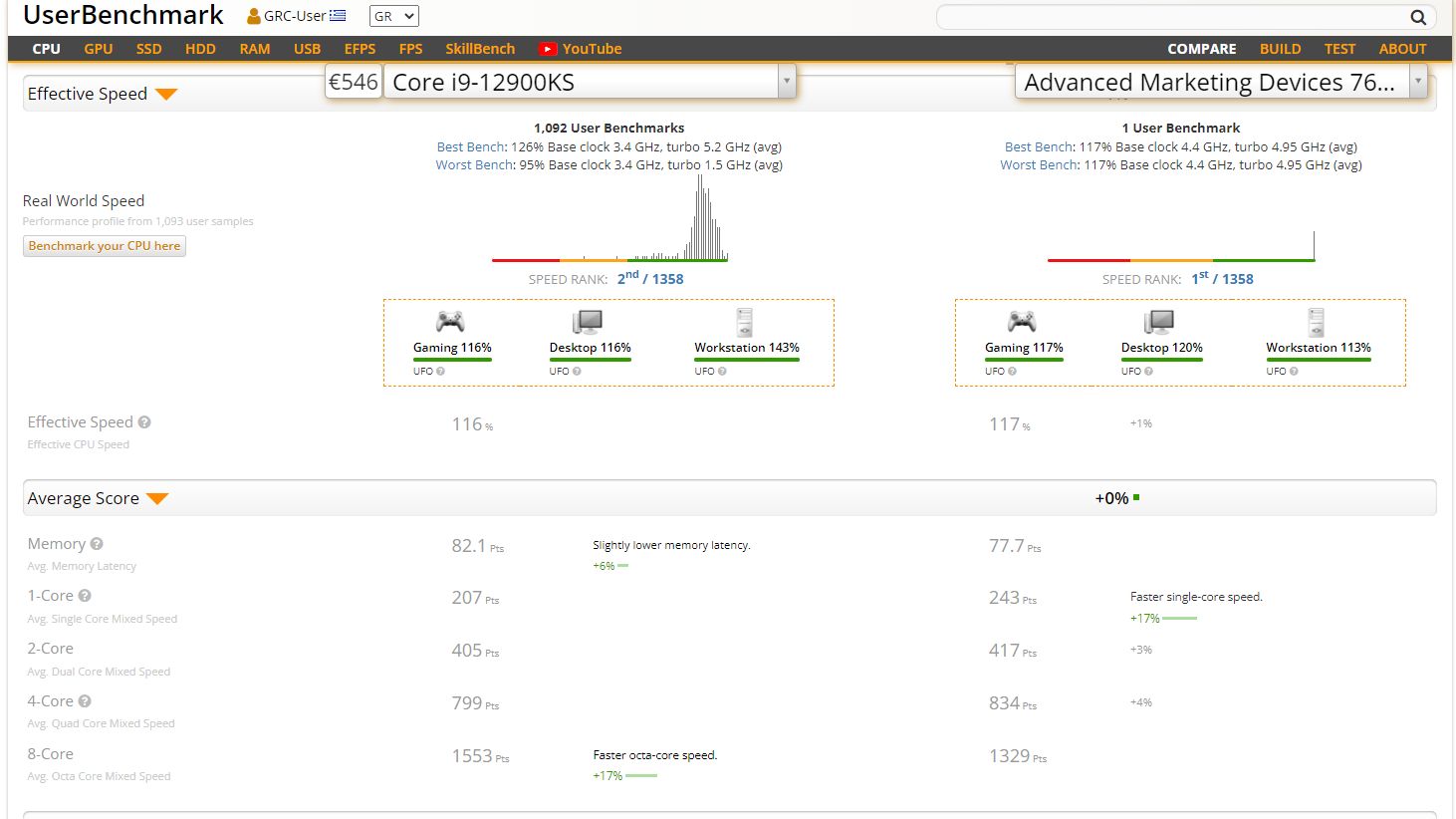 TerryLaze said:
That lead drops significantly as soon as you use more cores than just one, so any difference in gaming performance is still up in the air.
Although against the 5600x the difference remains quite high.
Click to expand...

Yeah, if compared to the 5600X, the performance jump is going to be huge. Then it means in single threaded apps/games the new upcoming 7600X might take the lead. Gaming performance will actually still vary though, IMO.

I wouldn't overlook Intel's upcoming Raptor Lake CPU lineup as well, since according to the rumors, the Intel 13th Gen Raptor Lake CPUs are going to offer up to a 15% single-thread and a massive 40% leap in multi-threaded performance. Intel themselves have mentioned up to 'double-digit' performance gains with Raptor Lake & it's quite interesting how the blue team is going to hit these performance estimates.
Last edited: Aug 10, 2022
You must log in or register to reply here.
Share:
Facebook Twitter Reddit Tumblr WhatsApp Email Link