Here's a mouse perfect for MMO and MOBA PC gaming.

just have a simple numpad like logitech or razer,
K

Looks like a good mouse maybe the ideal MOBA gamer mouse since it doesn't have excess thumb buttons making it easier to hit the correct one and another by mistake.

What I'd really love to see is a trackball mouse for MOBA gamers with a nice optical sensor from Razor.
K

So how do you reach those buttons with your HAND OVER the buttons?

With my Logitech Pro mouse, my thumb can barely handle the 4 buttons I have there, plus the usual 2 buttons & wheel.

There is where the keyboard or another controller comes in handy. Speaking of which, I actually HAVE This device: 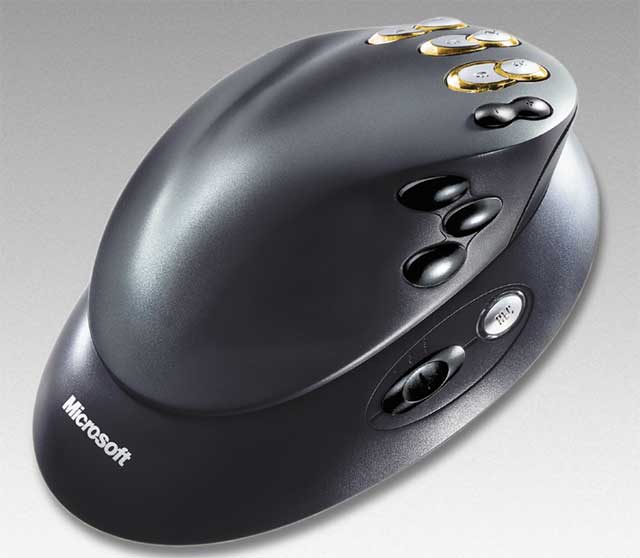 Which I haven't used in years... hmmm wonder if it'll owrk on Windows 7. I haven't used it in over 10 years... I use about 16 keys on my keyboard + mouse, so I think I found it more in the way than anything else. Its a left-handed movable base controller. So while the "mouse" area moves in 8 basic directions, its attached to a base so it doesn't actually go anywhere. So that can replace the WASD keys, but I think its TOO slow for many players. I use my mouse to control movements (LB forward, RB rev) and move movements for direction. Keyboard is for shooting, inv. weapons... etc.

Another ODD MS joystick I have...

Notice how it looks like someone took the TWO Wii controllers and attached them together! This thing was made around 2000/2001. You were supposed to control 3D space movement right the right controller, which meant the left one moved all over the place... and worse, the movement was very restricted.