I have an RTX 3080, and for some games that are not really heavy on the GPU, my memory clock can fluctuate constantly (like every second) between 2 memory clock frequencies, by example 5001 mhz and 9502 mhz, or between 810 mhz and 5001 mhz (frequencies reported using MSI Afterburner).

Can this harm the card in the long term? Should I better set those games to "Prefer maximum performance" in the Nvidia Control Panel to avoid those constant fluctuations? I am less worried for the Core clock because the jumps are much smaller than the memory clock, which only has like 4 frequencies possible.

Many thanks for your feedback.
0

drivinfast247 said:
That's how it's designed. It's fine.
Click to expand...

Thank you for your answer. So you confirm that having the memory clock doing this is perfectly safe? 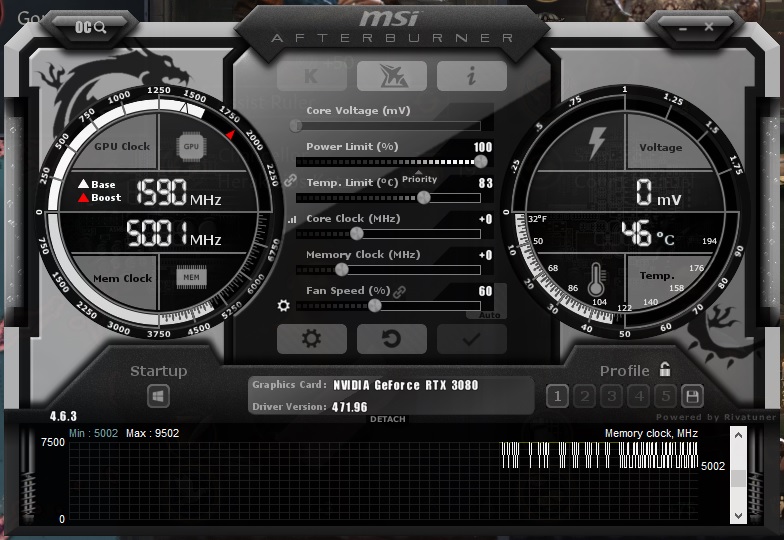 the core clock is much more stable:

Tarou said:
Thank you for your answer. So you confirm that having the memory clock doing this is perfectly safe?

the core clock is much more stable:

Looks fine. Just to be sure go ahead and use DDU to remove all traces of old drivers. Then reinstall latest driver.
0
T

I have no idea what could be the symptoms of a corrupted driver. To install the one I am using actually, I used the "Perform a clean install" option with the Nvidia driver's installer.
You must log in or register to reply here.
Share:
Facebook Twitter Reddit Tumblr WhatsApp Email Link