I keep smelling this chemical smell and I was wondering if this is common for new pc?

https://pcpartpicker.com/user/Spartagus423/saved/#view=cd6TCJ (My New PC I Built)

I have been getting headaches and itchy throat...The smell comes and goes and I think it is from my Motherboard. I am using Maximus Hero XI Wifi and I thought the smell was from my asus rog pg279q which is my new Monitor.

I tried opening up the system and see if I could find the culprit but I let it run for like 30 minutes on my counter with open side panel and didn't smell anything but when I closed it and put it back under my desk on the elevated shelf the smell comes and goes.

Did I do something wrong? The computer temp runs average GPU 55 degrees - 72 Degrees when gaming. Also I am using i9 9900Ks. Computer is running fine but the smell is really bugging me.

A chemical smell isn't normal.
Are you sure you removed all the little anti-scratch plastic strips from the cooler's contact plate, the gpu, and the motherboard? Some are easily overlooked.

It's probably best you take everything apart and carefully scan over everything for any burns; you shouldn't be smelling anything if something wasn't burning.
-Do a psu jump start test
-The barebones start up test: check the motherboard, the memory slots, PCIE slots, VRMs, M.2s, everything
-Turn it off, install the gpu, start it up again, and check the gpu for any fumes or other reaction
Reactions: DMAN999
0
S

I am pretty sure I took them off...But the smell comes and goes and when I left the machine plugged into just the power adapter open I left it for 30 minutes and didn't smell anything.

If I just keep the computer plugged in while open with nothing attached I don't get a smell...

What should I do? Even now with all my stuff plugged in I go behind computer and sniff where the mobo is and Video card but don't smell anything but when I sit in front of the computer and play on it it comes and goes.

Not sure what the heck to do.
0

I suspected a part burning, but I've never heard of a monitor 'smell'...

Do you have an extension cord or surge protector connected to your PC?
0
S

yea all my stuff is plugged into the surge protector

Spartagus423 said:
yea all my stuff is plugged into the surge protector
Click to expand...

Check all your plugs. Make sure none of them have melted and are stuck in the SP.


Spartagus423 said:
I smelled the back of the pc right now and don't smell it but it comes and goes
Click to expand...

But you said it only comes when you're in front of the PC though?
0

I would def check the stuff around the PC. Cables first.
Reactions: Phaaze88
0
S

so I did a test..I took my computer out of the place I set it up at.

I opened up the side and connected it to my new monitor and let it run overnight on my kitchen table to see if in the morning I would get that smell..

So far no smell...I have been running it nonstop for about 12 hours. I closed the side and let it sit on my kitchen table currently sideways closed and observed Heat with Speedfan.

at 144hz with 2 games open and watching stream on the one monitor my heat is 73-76 Degrees. The smell comes and goes I don't know if it is me or the computer.

So not quite sure..I cleaned out the corner with vaccuum and dusted desk,

Since the smell comes and goes when the PC is under load vs. idle, I would check the fans.
Unplug them one at a time and run a stress test like the Aida64 System Stability Test and see if the smell is present or not for each fan.
It could be a faulty fan (case or CPU cooler) that is faulty which would explain why the smell increases as the PC is under load and the fan speed increases.
0

Did you use the same, or any, power strip, with it set up in the kitchen as what you were using when it was connected in the other room?

Your PSU should be directly plugged into the wall. It should not EVER be plugged into a "power strip" or "surge protector" unless it is a high quality industrial type unit rated for 15-20 amps. Monster, Belkin, Amazon basics, Walmart, Lowe's and other cheap branded units are not recommended to be used AT ALL. Ever. Not if you value what is plugged into them unless it is something like your monitor or a lamp, but even then do not plug into them thinking they offer any actual protections. All they offer is convenience, that's it. The "protections" on most power strips, labeled as "surge protectors" is literally almost non-existent.

If you want to use a power strip/surge protector, you need to spend the money on a reliable, high quality unit.

APC, Tripp-Lite, Leviton, Eaton, Leviton, General Electric, Polyphaser, Ditek, Siemens, ABB, Square D, Intermatic, Cutler-Hammer (Eaton), and Syscom, these are the brands you can trust to have high quality internal electronics if you MUST use a power strip. Do not however use a power strip thinking that it offers significant protection, because even the best of them does not, not really. Whole house protection is the only real protection from surges.

Monster and Belkin, and a few others that are commonly used, almost unilaterally use the same protections in their 45 dollar surge protector strips as what you would find in an 8 dollar Amazon or Walmart branded model. And if you ever take one of these, or any cheap box store, dollar store (Even worse than these others usually BUT occasionally about the same) or Harbor Freight power strip apart you are likely to find frayed wires, poorly soldered connections with blobs of solder nearly touching crucial and potential short circuit points, super low quality MOVs, and a ton of other indicators that no real integrity was involved in the design or manufacturer of these units.

Another factor to keep in mind is that even with some of these high quality units, any protection that MIGHT be afforded, is usually the end of that product after one shot. This, directly from the Tripp-Lite manual for the #1 selling surge protection power strip in the world.


All models feature an internal protection that will disconnect the surge-protective component at the end of its useful life but will maintain power to the load now unprotected.
Click to expand...

I believe many models from APC and a couple of the others I listed have now incorporated designs that permanently disengage any ability of the device to deliver power once a surge or short of significant enough caliber to incur the protection has occured. That basically means once there has been a surge or short, throw the device away. Even for high end models. Only whole house protection and properly earthed circuits offer any true protection from a serious surge or direct strike from lightning somewhere close enough to affect your segment of the grid.

And whatever you do, don't EVER buy any kind of extension cord, power strip or other electronic device with slip rings. 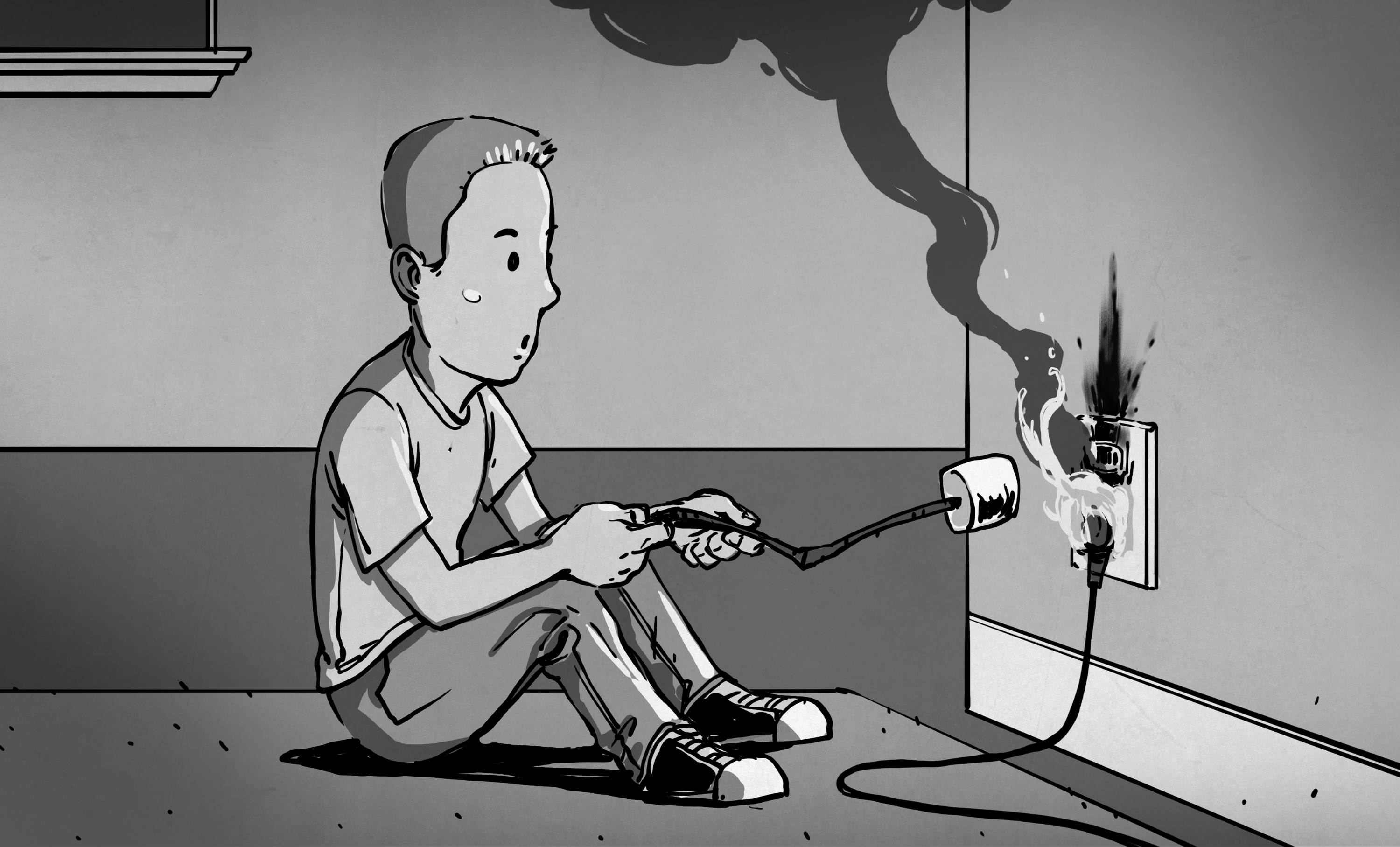 This Power Strip Is A Fire Starter

A few weeks ago I needed a power strip in my home office. The outlet in question is located behind a filing cabinet so it would need a low profile plug. I jumped on Amazon to buy a surge suppressor…


If the problem is NOT related to a power strip, because you are still getting the same smell without using one, then the FIRST thing I'd do is pull the motherboard and make sure that there is not a standoff located in a spot under the motherboard where there is no matching standoff hole in the motherboard. This is actually something we see fairly often even if it isn't particularly common, it happens. Especially if the standoffs come preinstalled and you don't specifically check to ensure there are none installed for locations that your board doesn't require.

After that, I'd pull every connection to the motherboard or power supply and make absolutely sure none of them are 180° backwards or off by one pin. For fan connections, that can be easy to do and not even know it. Connectors that are not QUITE fully seated can sometimes heat up or arc as well, and when warm the plastic insulators can let off a little magic smoke or stink.

Next I'd check for any leaking or bulging caps on the motherboard, or any visible signs of heat damage anywhere on it or on anything else and if you come up with nothing I'd return that power supply and buy something worth having as that unit, really isn't, and there's a good chance it could be the source of your problems since it's not actually built by Super Flower and is farmed out to an outside manufacturer.

For insight to our recent discussions regarding the G5 series units, you can start here.

Good Point Darkbreeze.
I use a power strip for everything Execpt my PSU, which is plugged directly into my wall socket.
0

I added a few things to that last post.
0

I have my psu plugged into the UPS, because it doesn't quite reach the wall socket... if that's a problem?
0

IF you have a high quality power CONDITIONER, then that would be another exception and the conditioner would be desirable to have placed between the wall outlet and the PSU or monitors, but you wouldn't want to connect any other devices to that unless it's audio equipment OR unless you NEED to because you live in an area with a poor quality power grid.
Reactions: Phaaze88
You must log in or register to reply here.
Share:
Facebook Twitter Reddit Tumblr WhatsApp Email Link