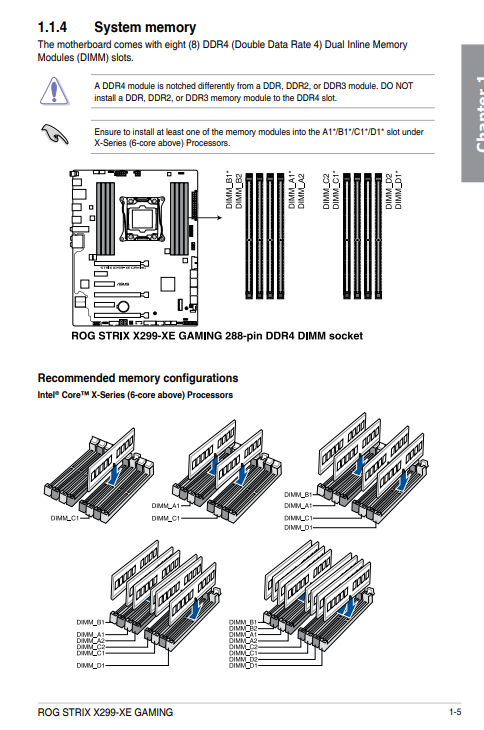 Today I bought myself some new parts, as I am slowly building myself a new computer. A new PSU of 1000w and four ram sticks of 8 GB each. I first installed the new PSU and tested the computer if it still worked, and it did. I then dragged my computer torwards a table where I wanted to insert the new RAM sticks. Unfortunatly I forgot to remove the displayport and so the displayport bendt severely, and I got scared the the motherboard was affected by it. I then placed the new RAM sticks in at the recommended slots, but the computer wouldnt boot. I then reinserted the old ones and it booted fine. To test my new ramsticks further I tried to boot with one of the new RAM sticks, and it booted fine. Then two, and it worked fine. I then inserted the last two sticks(total 4 sticks in now) and it booted. What was diffrent from the first time I dont know, maybe I didnt insert them good enough? When checking BIOS only two of the sticks is recognized, and looking at the LED on the ramsticks only two of them are lighting up. I did some searching on google and I did some digging into my BIOS settings myself but found nothing that I would want to change.

As nothing was working I decided to try to put all the ramsticks on the right side and when I did, it worked splendidly. BIOS recognized 32 GB of RAM. But now my question remains, why wouldnt the recommended memory configuration work? Is there anyway of finding out what exactly is wrong?
1

Tagging this because I'm dealing with the same issue. I even have more screen tearing with them I. Wrong slot. I was gonna just start a new thread on this
You must log in or register to reply here.
Share:
Facebook Twitter Reddit Tumblr WhatsApp Email Link