I have just bought new mobo and aftermarket cooler with double fans but I have just noticed that Asus Armoury Crate is showing different temperature than all 3rd party apps like MSI Afterburner etc. Why is that and how will I know which is correct? I clean installed Windows and updated all drivers and BIOS.

Depends on which sensors they use, one might be looking at average core temps, other might be package

My avg core temps is 38C but my package temp is about 10C warmer, it is a moving target, its never the same - Ryzen cpu have over 500 sensors in the core to track temps so its always a moving target,

If you compare core temps here to CPU temp in the 2nd area, the difference is about 12c but the CPU temp is constantly rising and falling, core temp is more stable 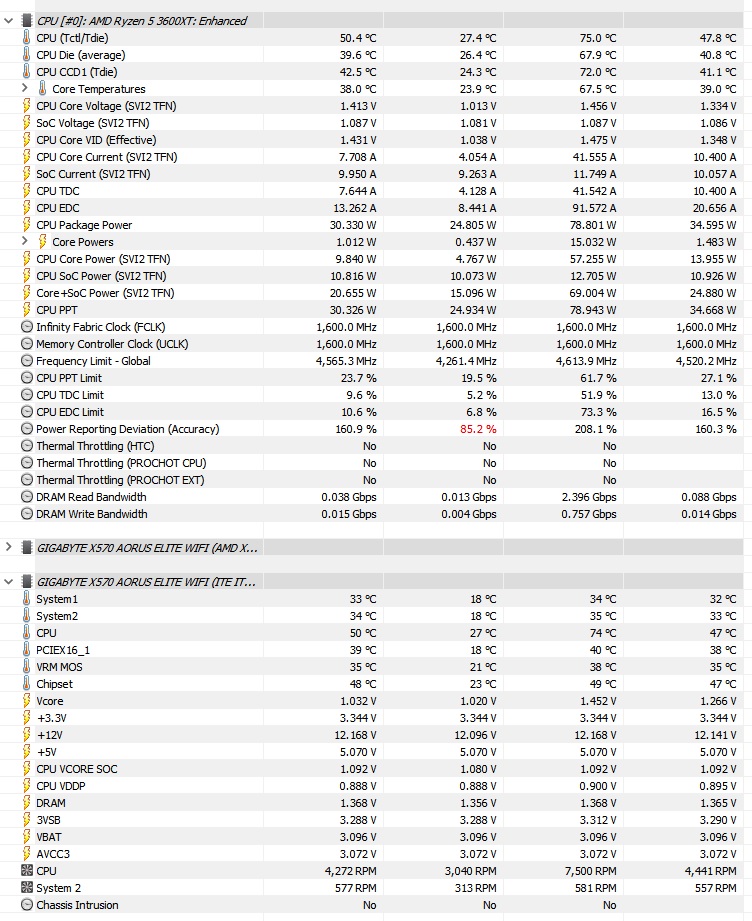 try using HWINFO and see which is which - https://forums.tomshardware.com/threads/how-to-use-hwinfo-to-track-sensor-values-on-ryzen.3693704/
Last edited: Jul 8, 2021
0

Thank you will test that but why there is no standard temp or simple way like Intel have. I am new to AMD system.
0

both doesn't have those so called "standard temp". Intel systems also have different temperatures in one core and another.

The thing with AMD is that unlike Intel, AMD uses three small chips in one large CPU (one input/output, two with CPUs in them), thus if only one CCD (the chip with cores) is fully loaded the temperature will increase while the other might see a small increase
0

I find the package temp is always going up and down so its better to look at CPU CCD1 as it ignores the spiking core and just shows average temp of all the cores.

The way ryzen works is if a task needs to be done the CPU will wake a core and run it as fast as needed to do task and then will race back to idle again. this means that Package is always jumping to 50 and then reducing temps to 42 all the time, its sort of useless to track what temp of actual CPU is. So I use CPU CCD1 as its more stable
0

Nice, new thing for me. Thanks. Ok then please guide here that I need to see it in game so how should I configure MSI afterburner here so I can see required temps in game.
0

this shows how to do it in Afterburner - https://www.avast.com/c-how-to-check-cpu-temperature#topic-2
seems you can use rivatuner with HWINFO as well but I am not sure how - https://www.hwinfo.com/add-ons/
0

Oh sorry for not mentioning that I know how to use OSD feature of Afterburner, I meant I want to see CPU CCD1 in Afterburner, is there any way?