I have been having audio issues since November with my motherboard and I was wondering if someone can help. My 3.5mm jacks on my setup including the front and back ones, do not detect any devices plugged into them. I never had issues with my audio until I brought my computer into a repair shop for an unrelated issue and the repair person deleted a bunch of audio drivers trying to figure out a USB problem I was facing. I still have no idea why he did that but since he did that, when Windows restored the audio drivers once restarted, it never worked again.

I tried deleting the drivers and reinstalling them multiple times. I downloaded the audio drivers from my motherboards website including the most recent one from December. I downloaded an audio driver from Realtek directly. But still I am unable to receive audio through 3.5mm ports on my PC. The only way I can listen to audio is through USB ports on my device.

I tried to restore windows to a time prior to him trying to repair my computer but unfortunately too much time passed and I was unable to find a restore point that was old enough.
I reinstalled windows and I also tried to repair windows through their media creation tool. Still no audio with my audio jacks.

I also posted this issue on the Microsoft community (https://answers.microsoft.com/en-us/windows/forum/all/audio-devices-not-working-audio-jacks-do-not/0de06082-2444-403c-823a-75e81d78263c) and still have not been able to fix this issue after all the suggestions.

I do not understand how something small could cause such a significant issue on my computer. I tried multiple different 3.5mm devices just in case, 3 pairs of headphones and an aux speaker but none of them are detected when plugged in. I disabled the front panel detection as well as I saw that as a common recommendation, still no audio. I also updated to the newest BIOS because I wanted to try literally everything but it did not fix it either.

If anyone has any other recommendations I would be eternally grateful! Thank you so much.
0

Have you checked Device Manager to see if the repair guy disabled anything in the "Sound, video & game controllers" category ?
0
C

Phillip Corcoran said:
Have you checked Device Manager to see if the repair guy disabled anything in the "Sound, video & game controllers" category ?
Click to expand...

Great suggestion. I did not even think to try that but unfortunately I was unable to see anything disabled that would affect the audio. I will attach a screenshot of what is displayed when viewing my device manager. 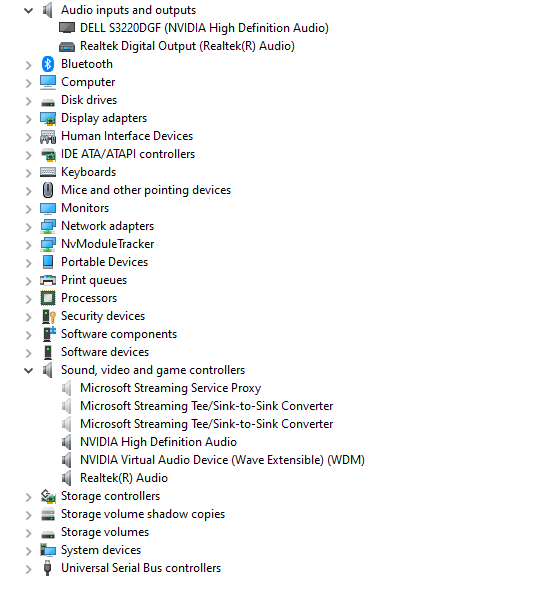 Is your Dell monitor connected with HDMI cable, and if so are you getting audio through the monitor speakers ?
0
C

Phillip Corcoran said:
Is your Dell monitor connected with HDMI cable, and if so are you getting audio through the monitor speakers ?
Click to expand...

My Dell monitor does not have speakers. It shows it as an audio option but it does not support audio output.
1

Even if your monitor doesn't have speakers in it, if you have chosen Nvidia to be your sound output device, the sound will be sent the monitor. You decide where to send the sound.
Reactions: Phillip Corcoran
You must log in or register to reply here.
Share:
Facebook Twitter Reddit Tumblr WhatsApp Email Link