I would like some advice on how to achieve a BCLK overclock on my MSI GS66 i7-10750H. I know overclocking isn't recommended on laptops but I have a top of the range cooling system in place and years of experience in doing so with no problems.

I currently am running a stable overclock via ThrottleStop at 4.3GHz while gaming with a -144 undervolt - temps are 80c.

However, for one particular game I play (15 years old), a BCLK overclock is essential for it to run well, but only when achieved with software - not via BIOS. It supports internal timing regarding the clock frequency of the Front Side Bus (FSB) which is read and sent by the basic input / output system (BIOS). If someone overclocks this FSB frequency with certain software, it differs from the actual frequency that is sent by the BIOS. This has an impact on the basic calculation of the game and makes the game run more efficient.

I know SETFSB worked well with older processors but doesn't seem to work with newer CPUs. Asus TurboV Core offers this feature as can be seen here: 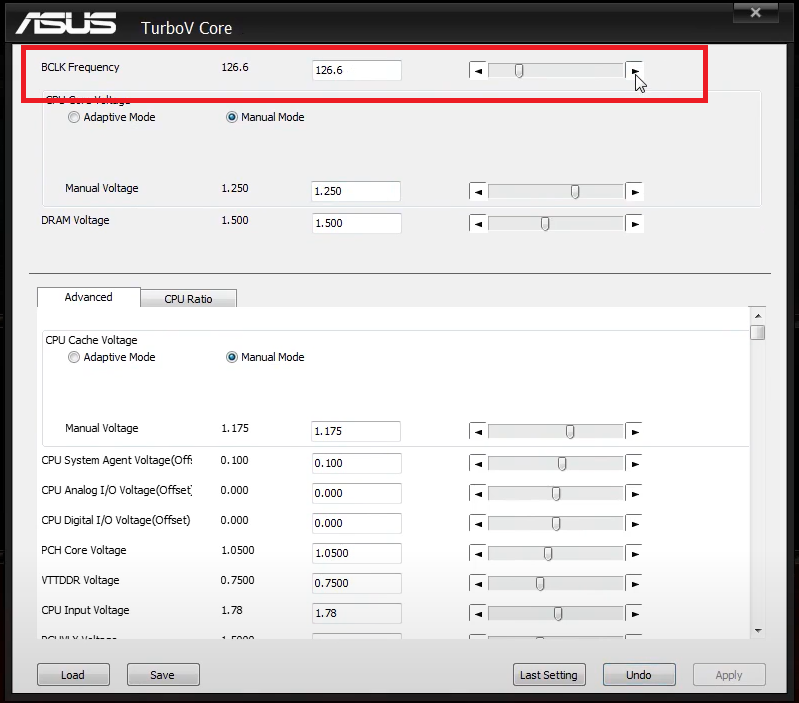 Does XTU offer a BLCK overclock feature? How could it be achieved? Any other program suggestions?

There is no such thing as "top of the range cooling system" when it comes to laptops. If you overclock a laptop, you CAN expect something to die in relatively short order. There are no exceptions to this rule that I have ever seen, and in fact, even at stock configurations it happens MUCH more frequently than either the manufacturers or the tech media would like you to believe. The bottom line is that the cooling systems inside ALL laptops are BARELY adequate, and sometimes really not EVEN adequate, for the hardware inside them.

Since practically ALL laptops share the same amount of space inside, they pretty much ALL have similar cooling capacity. The only really difference is for laptops that have dedicated graphics cards usually also have an additional cooler for that, but it won't have any effect really on CPU temperatures nor will the CPU cooler have any effect on the dedicated graphics card temperature. Some FEW models MIGHT have a slightly larger heatsink design incorporated, but even so, those are STILL designed ONLY to the needs of the system AS IT WAS SHIPPED, not for any kind of overclocking and not for cases where replaceable hardware has been replaced with something that is a higher end upgrade to what it originally came with.

Every overclocked laptop I have EVER seen, and there have been many of them especially back in the AMD days when the A-series units were used with the AMD Overdrive software, have died in rather short order. None of them has ever lasted very long at all.

I promise you, if you overclock this CPU you WILL be back here within the next six months wanting to know WHYYYYYY, and "how did this happen", just like everybody else who posts here with problems after they've overclocked a laptop or even a lot of them who didn't.

Anybody who insists otherwise is simply ignoring the facts or intentionally fooling themselves in order to only see what they want to see.
0
R

Thanks but I've been running it for a year now with no problems and have different profiles for each of my needs. 79c temps is not a problem for 2 hours a day while gaming. Regardless, I am willing to take the risk. So please from now can answers focus on my question at hand about BCLK.
0

The additional 20-40 MHz gained from cranking 100 MHz Bclck up a notch or two (if even supported in BIOS as an option, and if stable) will likely gain you a .1 fps increase...

Not worth the trouble, most likely...
Reactions: Darkbreeze
0
R

mdd1963 said:
The additional 20-40 MHz gained from cranking 100 MHz Bclck up a notch or two (if even supported in BIOS as an option, and if stable) will likely gain you a .1 fps increase...

Not worth the trouble, most likely...
Click to expand...

Which software for my CPU would be able to do this?
0
R