So... Where to start... I will try to be as precise as I can. Yesterday afternoon I had a BSOD that said KERNEL DATA INPAGE ERROR, the PC restarted itself and didn't got to Windows, just stayed on the BIOS, I think, where you can see the time, RAM, Hard Drive, etc. After restarting again it got through but after login my account I could only see a black screen. By pressing Ctrl + Alt + Del I could access to that menu but not to the Task Manager, then I tried Start Up repair, restoring a previous "save", safe mode, etc. Nothing worked. I then tried to reinstall Windows and after long hours of it installing again I managed to see the Desktop again. I got through installing drivers programs and whatnot thinking the problem was solved, use it for around 6 hours with no problem.

Next day, though after turning it on and using it for a while I had the same BSOD. I went to the Even Viewer and saw the 0x0000007a among other things. I decided to do a disk check on the CMD, because that's what a lot of websites said, and left it to do that. While doing that there was, a couple of times, a start up error, that's where I saw on the Even Viewer the 0x0000006b error, I thought after that it was done. Just to be sure I did a system check for corrupted files and a malware scan, it found some corrupted files and corrected them, nothing strange on the malware side. After some hours, while I was having dinner, I got another BSOD, I only know this because when I came back it was on the BIOS screen again. I restarted and it turned on like normal, went to the Event Viewer and saw the error 0x00000154 this time. I could still make a RAM check I guess, and made another clean install, without saving my files this time but... I'm not sure anymore. I'm using this computer to study, too, so I need it, I would really appreciate any help!
1

This is where chkdsk in Windows 8 is completely different. Spot Fix is a new parameter that checks the disk and fixes any problems in just a few seconds. The time it takes to run chkdsk using spotfix is based on the number of corruptions instead of the number of files as in older versions of Windows. This means everything is fixed in seconds.
Click to expand...

what are specs of the PC?

What is your boot drive?

Can you follow option one on the following link - here - and then do this step below: Small memory dumps - Have Windows Create a Small Memory Dump (Minidump) on BSOD - that creates a file in c windows/minidump after the next BSOD

My boot device is a HDD of 1 TB, is the only drive I have, no partitions. It's a 5 years old PC, or will be in December. I already configured that for the next, so I will link that when I get it. I'm also planing on cleaning the inside of the PC tomorrow to see if that helps. Also thank you for the quick answer and the help!
1 Get the fix to “0x0000007a: KERNEL DATA INPAGE ERROR” boot error for Windows Vista, 7, 8, 8.1 or 10 operating systems. About the “0x0000007a” error Description and Symptoms …
neosmart.net
https://learn.microsoft.com/en-us/windows-hardware/drivers/debugger/bug-check-0x154--unexpected-store-exception

2 of those could be the hdd

try running crystaldiskinfo (blue icon) on hdd, it will auto generate a report

Done! I saved the report on this text file, I assumed that was what I had to do, hope it helps! 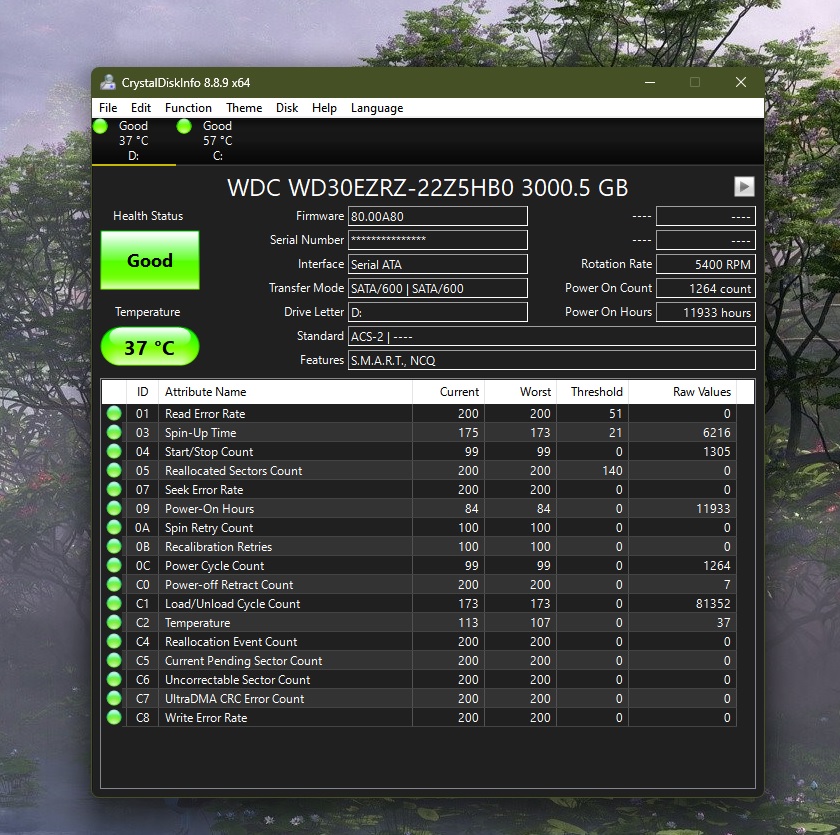 since its a Western DIgital drive, you could run tests using https://support.wdc.com/downloads.aspx?p=279
0
A

Sure no problem, here you go.

so WD says it okay but Crystal reports a warning on

"Current Pending Sector Count" is a critical S.M.A.R.T. parameter that indicates the number of unstable sectors on the disk drive that are yet to be remapped or reallocated.

A rise in "Current Pending Sector Count" may indicate unstable sectors on the disk drive. If this value increases over time, or you receive warnings/errors from a S.M.A.R.T. scan, you should replace the disk drive.
Click to expand...

we can run chkdsk and see if it can remap them

re run crystaldiskinfo after and see if its changed at all.

If its still the same, I would buy an ssd and turn that drive into a data drive. It might be fine like that for years to come.
0
A

I tried doing the chkdsk again, unfortunately I think nothing changed, and more unfortunately buying something else is not an option as I can't afford it... Wait, the raw value just went down to 17 out of nowhere while I was writing this answer, strange, I guess? I hope there is another solution... I didn't have any BSOD since last night at least, either. If I have one I will upload the file like you asked.
1

It can shrink by system reallocating a spare sector to it.

You might need to save for a new one. especially if that number grows

one thing we try to avoid BSOD is to move the page file. It might put it somewhere on the disk that isn't bad.

restart PC
On restart follow all steps above again until you reach Automatically manage page file size for all drives and retick it to let windows manage it. You need a page file.

that might help but really if it keeps growing you need a new hdd. They don't last forever and they also aren't that expensive.
0
A

So... I did this and I waited to see how it progressed before answering.

I had two crashes while trying to install something, guess it wanted to write where the bad blocks where... Fortunately the third time was the charm and it happened as you said. Anyways, yesterday I could use it without any mayor problems, though I had to turn it on and then restart it to work because it showed only the bios at the start.

Today I turned it on and not even the bios showed up and the red light, the one that indicates if the PC is "working" on something wasn't on, just nothing. I had to manually turn it off because the restart button didn't work either, it happened again, and the third time it finally got through... Dunno if this is caused too by the HDD but it is worrying...

After a couple of hours I had another crash and when I went to the Event Viewer I saw an error that said "The shadow copies of volume C: were aborted during detection because a critical control file could not be opened." I assume that this is, again, related to the hard drive.

I also found another error, but not at the time of the crash, that says "The device, \Device\Harddisk0\DR0, has a bad block." Again, this is related to what you say... I wonder if something else is going on too though. The current pending sector count is still at 17, it's not much, should it have this many problems?

Sorry for bothering you again, my knowledge about hardware related things is quite limited, I'm afraid... Will try to maintain it working while I save, I guess, but is not easy as everything cost three times more here. Anyways, as always thank you!
1

Avernesh said:
The current pending sector count is still at 17, it's not much, should it have this many problems?
Click to expand...

Current Pending Sector Count is a critical S.M.A.R.T. (Self-Monitoring Analysis and Reporting Technology) indication. In simple words, this parameter indicates the number of bad sectors on your storage drive. If you see this parameter the first thing you should be doing is backup your important data or recover your valuable data.
Click to expand...

I don't know if the hdd can just stop working due to this indicator. It is more likely to keep corrupting any data that is put on those areas. It could be you don't have any spare good sectors left for it to swap them out for.
How full is the drive?
0
A

I had to reinstall windows so the PC is still clean... I have 830 GB free out of the 930 GB I can use. Didn't want to install much stuff so I can still use it for now. Also the Current Sector Pending Count went down again to 15. And didn't have any problem yesterday or today... Shouldn't it be going up instead of down if it's dying? It's kinda confusing...

I also got a new kind of error the last time I got a crash. It says: "Volume C: (\Device\HarddiskVolume2) needs to be taken offline for a short time to perform a Spot Fix. Please run "CHKDSK /SPOTFIX" locally via the command line, or run "REPAIR-VOLUME <drive:>" locally or remotely via PowerShell." On the Event Viewer. The hard drive is fighting against it's destiny, perhaps?
1

This is where chkdsk in Windows 8 is completely different. Spot Fix is a new parameter that checks the disk and fixes any problems in just a few seconds. The time it takes to run chkdsk using spotfix is based on the number of corruptions instead of the number of files as in older versions of Windows. This means everything is fixed in seconds.
Click to expand...

So... To be fair, I didn't do anything after this, not even the thing Windows is asking me to do. To be fair it's not even asking me to do it anymore, the notification disappeared after three days. I didn't have any more BSOD either since Monday... And the only thing that changed is that Monday night when shutting down the PC a Windows update was installed, or tried to be installed as it crashed while doing so. I thought the next day I would have problems turning the PC on, but I didn't, and didn't have any problem since then... I don't want to be overly hopeful but I went to Crystal Disk today, after seeing that the Current Pending Sector Count went down to 15 the other day, and now it was 2, as you can see here. Maybe it is alright? It doesn't make any sense, no repair I had done before did anything, not even reinstalling Windows , but the moment I stop doing anything it starts to get better? I'm really baffled at this point...

How could I test if the errors are still there?

Last update, I guess, as it stands it appears that the HDD recovered itself somehow, against I didn't do anything for about a week, just monitored for any errors. I don't really know what happened, but I guess the issue is resolved for now? Thank you Colif for your help! I will take the chance to save up so if this happens again I can change the HDD.
Last edited: Nov 27, 2022
You must log in or register to reply here.
Share:
Facebook Twitter Reddit Tumblr WhatsApp Email Link