My budget is 200€ right now and i was wondering if those 2 gpus im gonna mention below are still relevant for those games:

They're both in the same price range (170-180€) where i live and im pretty sure they're pretty much identical with the Rx570 being just slightly better.
My case has a 360mm restriction for the gpu im gonna use and i do not want to use vertical mount.
Any better suggestions in my budget range are welcome, thank you in advance.
0
V

There is going to be a very slight bottleneck issue with your options. But I would highly suggest that going for RX 570 due to the fact that GTX 1650 has no power connector pins because of its very low TDP which is 75W. That low consumption sounds great but the GPU only gets its power from MOBO PCI and I think it won't be enough for gaming. Plus, RX 570 is way more better than 1650 but im talking about the "non super" one

Here are the bottleneck calculations for your information. It says it won't be enough for 1080p gaming, though.

Check out will Intel Core i5-10400 & NVIDIA GeForce GTX 1650 work without bottleneck issues.

Before choosing a GPU you need to address a major issue first. Get a better PSU. The unit in your list is a dangerously old design, passive PFC and only 360w on the 12v rails(likely can't deliver that). So closer to a 350w PSU than 650w. A poor PSU choice will turn that budget gaming rig into a doorstop.

Also buy the ram in a kit not individual sticks.
0
G

In my defense, im not the one building the pc, im getting it as a gift from a friend and it's a pre-built one, but brand new. I have little to non knowledge about computer building in general but im trying to learn as much as i can now that im getting into gaming.
Im gonna use the stuff that come with the pc for now since my budget is extremely low, but i can probably make a couple changes that you guys think are false by factory, like the psu that bignastyid mentioned. Dont think im able to go for more expensive swaps like cpu / mobo.
I went for an extra 8gb of ram because i read everywhere that it's better to run dual channel than single. There was a single 8gb stick in the build, so i found and bought one more, same brand, same specs. Both are still not used.
I've seen i3's / earlier gen i5's running the games i mentioned so im pretty sure i can make this one work too
Just need some guidance on parts that i SHOULD, no matter what, get rid off (like the psu) and names of the ones that i should buy if possible.
0

Well if budget is the deal here, i would skip that cpu and go for a ryzen build. That cpu is powerful but the gpu is kind of lackluster paired with it.
https://www.e-shop.gr/cpu-amd-ryzen-3-3100-360ghz-4-core-with-wraith-stealth-box-p-PER.559742 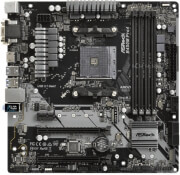 poorbugger said:
Well if budget is the deal here, i would skip that cpu and go for a ryzen build. That cpu is powerful but the gpu is kind of lackluster paired with it.
https://www.e-shop.gr/cpu-amd-ryzen-3-3100-360ghz-4-core-with-wraith-stealth-box-p-PER.559742

The build already exists. Im just looking for ways to make it better IF that is actually possible
0

Gamers Have No Age Limits said:
The build already exists. Im just looking for ways to make it better IF that is actually possible
Click to expand...