I have a Geh Antec New Gaming NX600 case. It has a built-in fan controller in the back where the case fans are connected. All is connected to an ASUS TUF Gaming Z590-PLUS motherboard. In principle, everything works. The fans turn on and I can sync the RGB with the motherboard (via de case LED button). The problem is, the computer seems unable to detect them and I can't control the fan speed. Sometimes it goes to 100% speed even if temperature seems ok. The cpu cooling is detected.

I can't change the speed or turn them off in the BIOS. I have "3 chasis fans" (technically they are 4, three front and one back) appearing in the Z-Fan application, but I can't control them. In applications like Armoury Crate these 3 appear at 0rpm. Is like they don't exist as the computer is concerned. I can't control them beyond the case LED button.
Last edited: Jul 22, 2021
0
S 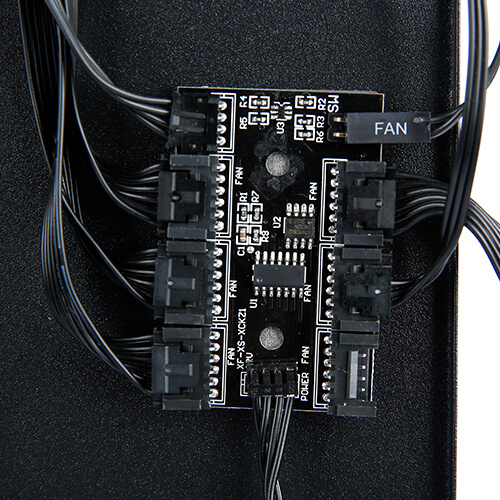 This is how the built-in fan controller looks.
0
P

Just WHICH fans are connected to that fan "Controller" board? Only your case ventilation fans (4, I believe)? Or also the CPU cooler?

The problem is deceptive labelling. This board is a CONTROLLER only for the LIGHTS in those four fans. The board has a power input at the bottom by cable from a SATA power output connector from the PSU. At top right it has a 2-pin connector that accepts a cable from the case's front LED Control button that you can use to change the lighting display. IF you also connect a cable from the 4-pin connector on the top left to a mobo ARGB header, then using the case LED button the right way will allow you to have your mobo control the lights, instead of you doing it manually.

HOWEVER, this board has NO ability to control the speed of the fan MOTORS, nor does it have any way to send any fan speed signal back to the mobo. So your mobo cannot show you ANY speed for any fan connected to this board. Further, the mobo cannot control the fan speeds either. Probably the fans all will simply run full speed all the time.

Although controlling the fan motor speeds normally CAN be done by mobo fan headers, the fans you have use a non-standard 6-pin connector, so finding out how to change the motor speeds and monitor them would require custom re-wiring and knowledge of exactly which fan wires do which functions.
0
S

Maybe is the water cooling? It suddenly start making a lot of noise and don't stop until I restart.
I'm pretty sure it is not the radiator fans, because I can control them.

It is a Cooler Master Liquid ML240R RGB.
The radiator is at the top of the case. The pump is down, as recommended.
0
S

A video of the problem. View: https://youtu.be/StKZOW1tcGY
0
P

If your AIO system makes a lot of noise at the pump (not the rad fans), there is a good probability that a bunch of the liquid in the loop has escaped, and the noise is from "cavitation" inside the pump. This happens when the air in the system gets trapped in the pump with a little water. It makes a lot of noise (normal operation is nearly silent) and also virtually stops circulation of the water. This means almost NO heat removal from the CPU, causing the rad fans to jump to full speed AND the temp inside the CPU to rise very fast. Those seem to be symptoms you have.

I recommend you contact Tech Support at CoolerMaster and ask their opinion of your symptoms, and what to do about that.
0
S

Temp is 42Cº currently after hours with the pc on. Well, I already contacted Cooler Master.
0
S

I opened the case and apparently it is… the gpu. Some idea about why it makes this noise?
0
P

The only item on a video card that makes noise is its fan. A couple possibilities.

1. The card is overheating, perhaps because there is a collection of dust inside the air flow passages interfering with air flow and cooling. If you can see such signs, try to clean out with an air blow.

2. If this card is several years old, the bearings on the fan may be wearing out so they make noise even at normal fan speeds. That means replacing the fan. Assuming it is not just a common case ventilation fan (few on video cards are), consult the card maker's Tech Support people for how to get a replacement and install.
0
S

I cleaned the card a bit and (fingers crossed) the problem has not appeared again.
0
P