I have a question. I been try to figure out to control my ARGB fans a into simultaneous blink mode. As most people knows, even you had the most luxury mobo, manufacturers only give 2 headers for ARGB and most of them are 3.0A max.

Thus, i begin to plan use the fan hub unit as below: 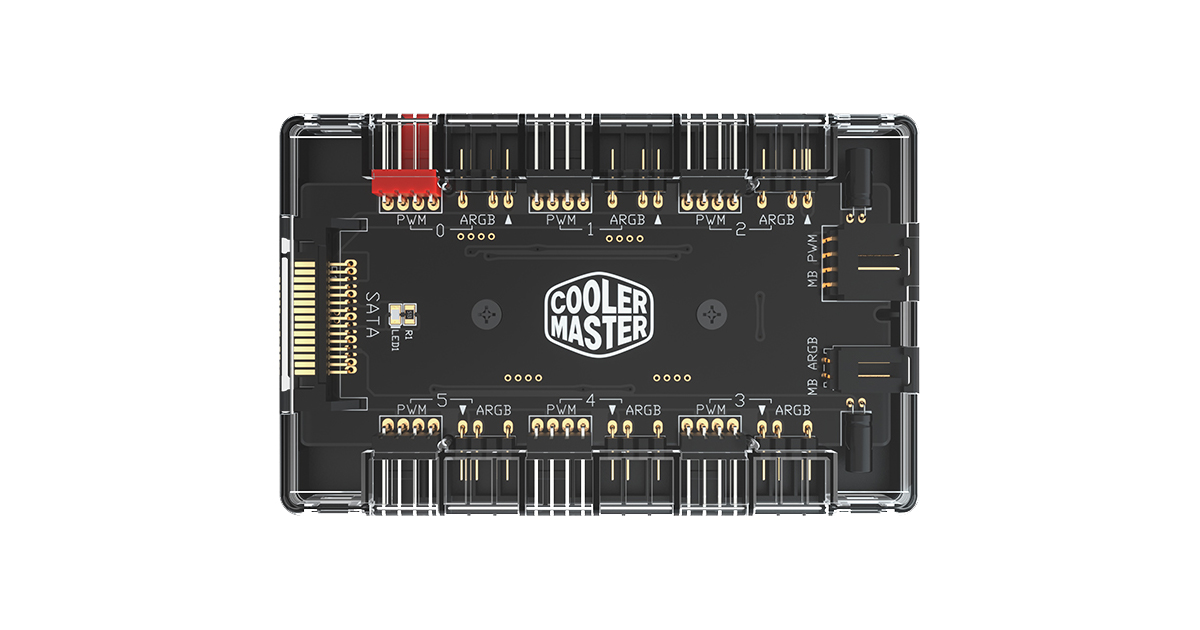 The new MasterFan ARGB and PWM HUB is capable of connecting up to 6 sets of Addressable RGB (3-pin) headers and PWM headers simultaneously. It enables users to expand cooling capability and enjoy greater system performance. Its small and compact design allows you to control your PWM ARGB fans...

From my understanding, the hub itself has the maximum 4.5A for fan LED current which i don't think the header at the mobo will support it. I am suspecting it drawing current from the SATA power source.

Then, i do see that it only has 2 pins which label MB and ARGB from the fan hub itself in order to link with 5V headers. I also suspecting it only draw D pin which is Digital signal to control the connected fans. If only someone can show me the point routing at the pcb hub.

I just want to be clear. Hoping you guys can help me.
0
P

You have most of that right, but I'll add a few details. That Hub will get ALL power for everything attached to it from the PSU via that SATA power connection. It will draw no current from the mobo header. It does get ONLY the digital control signals from the D pin of the mobo ARGB header and simply send them out to its lighting units, but that is not any significant electrical load on the header. The header is limited to max 3.0 A total load on its Grnd and 5V pins, but that is irrelevant when you are using the Hub.

The Hub is limited, instead, to 4.5 A max load. But that actually is imposed by the limit of the contacts in the SATA connection system and the associated wiring. So the Hub is limited to that for ALL of its connected loads. Now, that Hub has separate outputs for BOTH the fan motors and the fan lights, so the total of BOTH of those types of loads must be added up IF you connect both motors and lights of all your fans to the Hub. (To use the fan motor power and control features of this Hub, you also connect a small cable from its MB PWM port to a mobo fan header.) On the other hand, IF you connect to the Hub only the LIGHTING cables from your fans, and connect the several fans' MOTOR cables to another source (either to mobo fan headers directly, or via a separate fan Hub), then only the lighting items connected to this MasterFan Hub need to be included in the load on it.

So, you can figure out how best to use this Hub - for lighting only, of for both lighting and motors.

For total load calculations with six ARGB fans, you need the maker's specs for the max current each fan draws for the LIGHTS ONLY in the fan. You have not told us which fans, so I can't help there directly. You can go to the fan's web page and look for the specs. but many makers do NOT tell you that info. They may tell you the current max for the whole unit, or just for the motor, but not often for the lights only. If you cannot get that info, there' another way. They MAY tell you how many LED's are mounted in each fan's frame for the lights. Then you can use this rule of thumb: each LED uses at most 20 mA, or 0.020 A. So a frame with 10 LED's in it may use at most 0.20A for the LIGHTS only. That may help you work it out.
Last edited: Nov 29, 2020
0
T

I do get what you mean, my intentions is to utilize the ARGB header for blinking control.

My mobo has 6 fan headers after deducted 1 point for cpu fan header. I will use them for pwm control as for the rest using the fan hub to control. This means that use 9pcs ARGB 120mm fan 5 fans will be hook directly into mobo's fan header, left 4 fans hook directly to hub and connect to 7th fan header at the mobo. Since it directly draw current from SATA power source, it won't be much problem for mobo fan header.

I planned to buy 2 of these fan hub as well as the lian li 24pin and 8 pin strimmer ARGB extension cable. Both cable utilize 13.5W max. After I calculate, the current should be at 1.2A which shouldn't be a problem.
0
P

If you are buying two of those MasterFan ARGB and PWM Hubs, I suggest you use both to connect BOTH the fan motor and the lighting cables of the fans. Remember that a common ARGB fan has TWO cables from it - one for the motor only that goes to a standard 4-pin fan connector, and another for the LIGHTS only in that fan frame that goes to a 3-pin ARGB lighting header. For one Hub you could connect to it the MOTOR cables from FIVE fans, AND the LIGHTING cables from those same five fans. That Hub can get its PWM control signal from one of your mobo headers. Then do the same thing with the other FOUR fans and the second Hub and mobo header. I am surprised you say your mobo has six case ventilation fan headers. Few mobos have that many, but some have four such headers plus some others that LOOK like regular fan headers but operate differently. You have not told us exactly what mobo you are planning to use. We also don't know exactly which FANS you plan to use so that we can check the actual current loads for the motors and lights. But is is likely not to be a big problem - most fan motors pull less than 0.25 A max from the 12 VDC supply, and their lights pull 0.2 to 0.5 A from the 5 VDC supply. With five fans on one Hub, that certainly would not exceed 4.5A from either supply line.

For another thread I just found details of how the Lian Li Strimer cable extensions work. First, you should recognize that the product has been CHANGED in a recent update. The V2 models now sold include with the 24-pin main power cable a manual Controller box the previous version did not have. The 8-pin video card cable (it's actually a dual 8-pin cable) does not come with that box, BUT when you buy both as you plan, there is no problem at all. The second point is tied to this. Those cables each use a LOT of LED's compared to a fan. The 24-pin one has 120 LED's, the 8-pin one has 108. Each LED will consume at max 20 mA, so for 120 LED's you have a max current of 2.4A. (Your calculation above was wrong because you started with a WATT rating and divided by 12 VOLTS to get amps. BUT these are ARGB lights fed from a 5VDC supply, so 13.5 W requires 2.7 A.) That would completely consume the capacity of a standard mobo ARGB header for ONE such cable. HOWEVER, these cables do NOT get their power from the ARGB header. The Controller box supplied with the 24-pin cable connects to a SATA power output from the PSU for all power to its lights. It has TWO output ports so you can plug into it BOTH of those cables you plan to buy. A SATA power connection can supply 5 VDC at up to 4.5 A, and 228 LED's in two cables can pull up to 4.56A, so it just works. The controller requires a cable connection to one mobo ARGB header, and this picks up only the Digital Control signal from that header, drawing no power from the header

The normal operation of the Controller box is that you use its four buttons to choose all the display features manually. This means you need to arrange to have access to that box for making your settings and changing them. When you do that, however, the lights on those cables are NOT synchronized with the ARGB lights in the fans of your case that are being controlled from the mobo ARGB headers. But you also have the option (IF you have connected the cable from that box to a mobo header or a Hub ARGB output) to choose to turn over control of the cables' displays to the mobo header signals and make them synchronized. (I believe you do this by holding down the Mode button for at least three seconds.) Now, I have seen reviewers say that the displays of the cables are quite different from what fans usually do, and hence the displays you can generate on those cables by using the manual controller box are much more attractive than you can get by synchnising to the mobo. When you get your system set up, you can make your own choices.
0
T

Yeah, I do agree with you. Anyway, don't worry this is my 4th build so shouldn't be any problem for me. Just the confusing of ARGB current draw.

The lian li strimmer I just mentioned, I will change as well. I will use xpg prime instead.