I just ordered a new laptop from direct from Dell, on the Dell website and on the invoice the CPU is stated as a :

The laptop has arrived and im setting it up, under the system information dialog in W10 it reports the following :

In the past on Desktops and Laptops ive had, the boosts have usually been between circa 20% more than the standard clock speed.

But in this instance the boost is 360% the standard clock speed.

Does this mean that the CPU i have in this new machine is actually quite slow, but able to do for short periods of time (heat etc allowing) run at a faster clockspeed ?

Ive ran some benchmarks (screenshots below) against computers ive previously owned to try to get a better understanding of the performance of this 1035G1 CPU, and it may be that i have some gaps in knowledge, so if someone could help me to say wether this 1035G1 CPU is more powerful that the others in my comparison and if this new CPU is a "good" CPU that would be much appreciated.

I notice that the 1035G1 CPU is 4 core, does this mean they are each at 1GHz ? What happens if i have a single threaded programme that needs more than 1Ghz ?

I intend to use this 1035G1 CPU / computer for general office usage, but i like to buy more powerful machines than i would require so i can use them for different purposes at a later date if required.

Here is a screenshot from CPU Benchmark 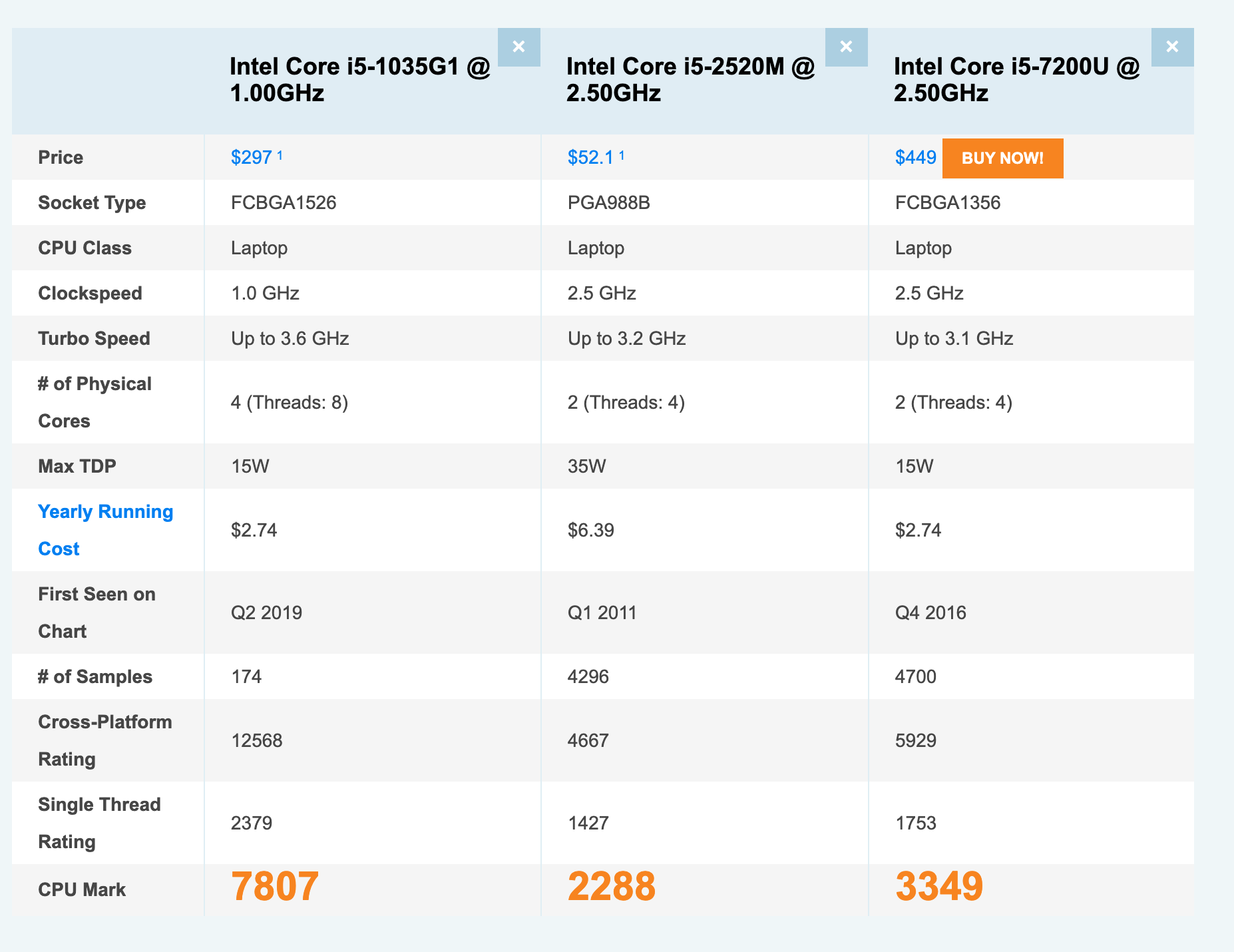 Here is are screenshots from from CPU Monkey 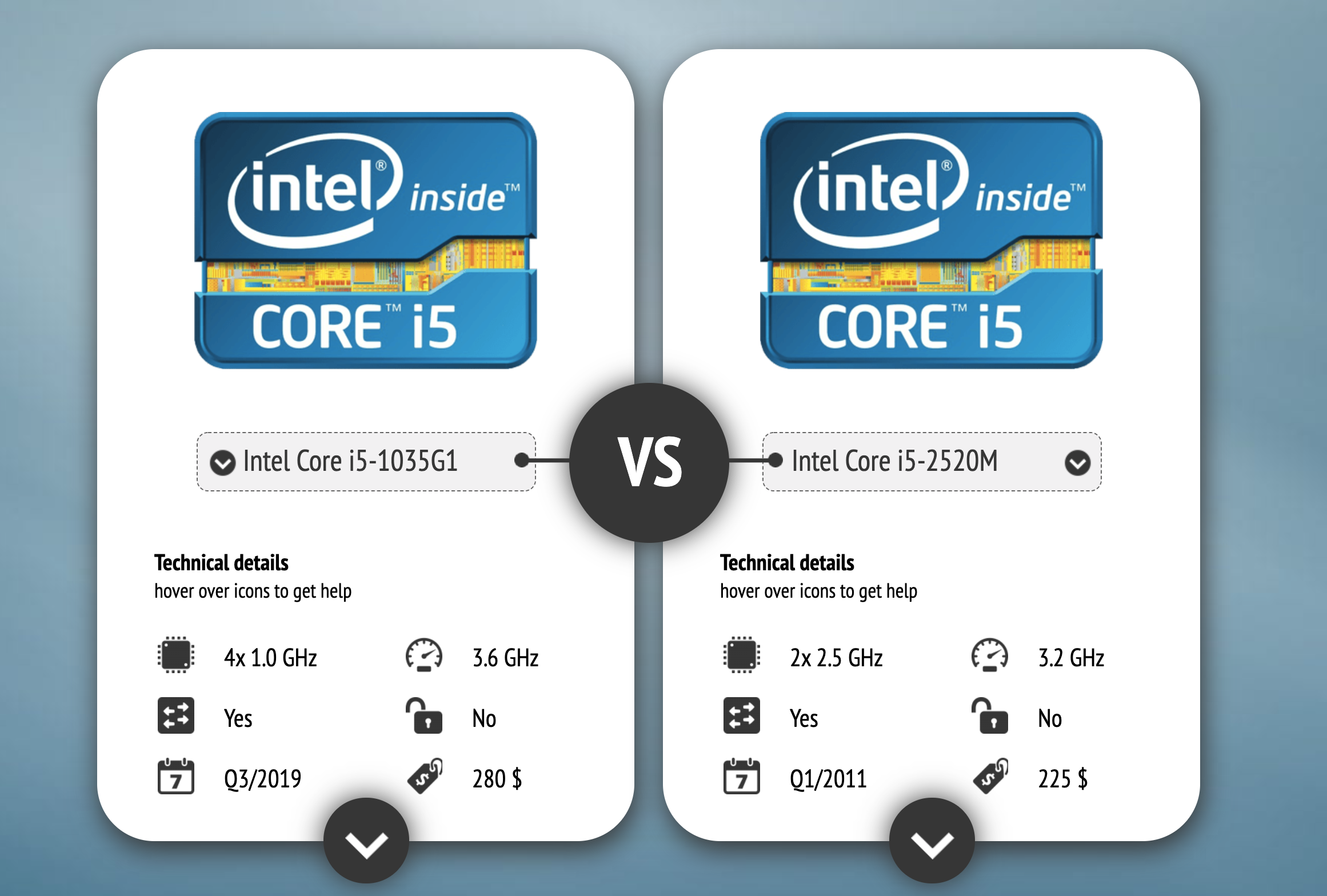 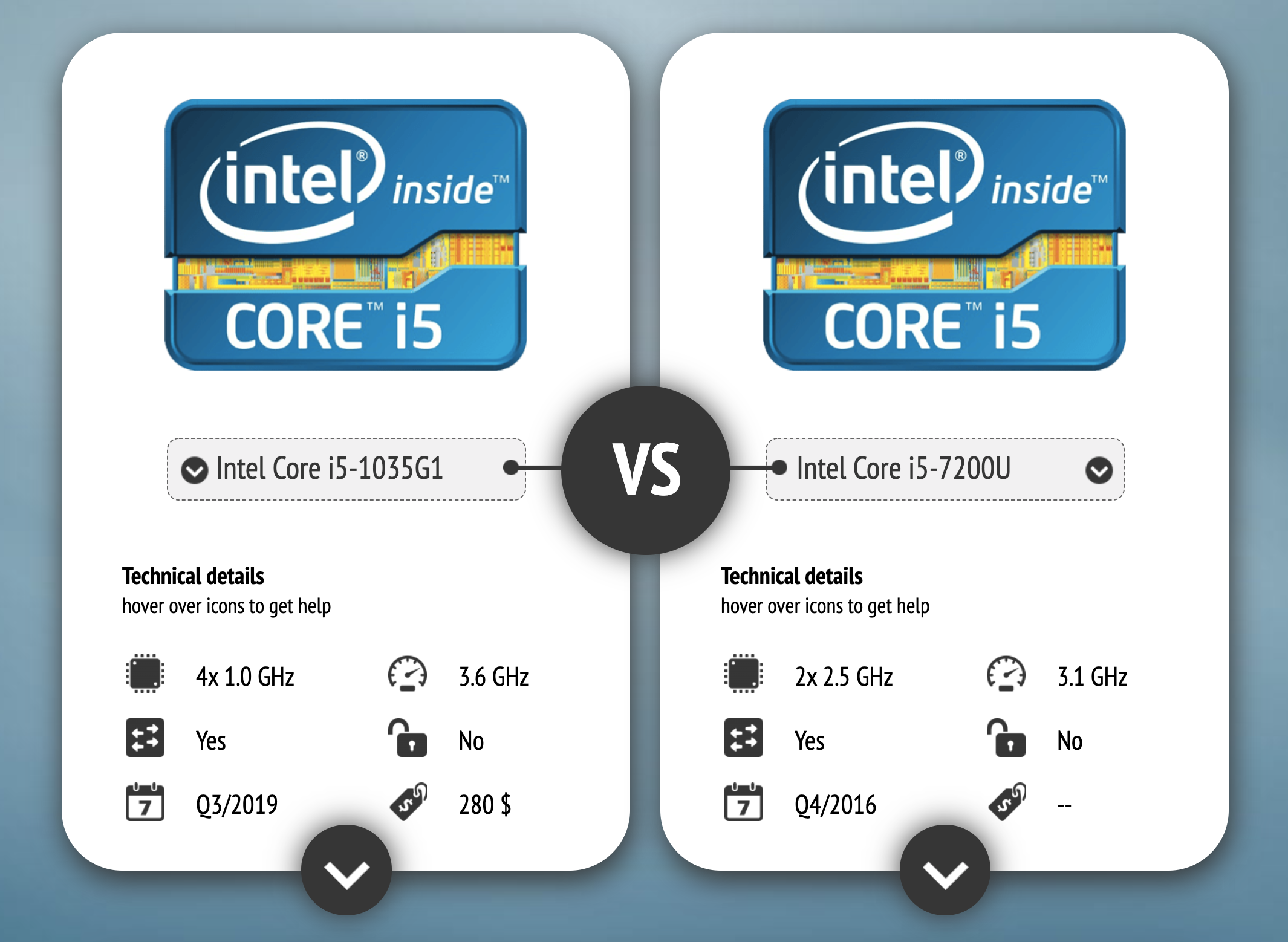 Here are some screenshots from Geekbench

1GHz is starting frequency and it should boost under load to top stated frequency.
0

I was reading on Intel's website about this, they state :

where i have low starting frequency CPU, does this mean to extract performance out of the CPU it will be in turbo boost allot of the time ? And if so can it / the cooling system sustain longer periods turbo boost, or is the CPU intended to run at 1Ghz most of the time on simple tasks and just turbo boost occasionally ?
0

Laptops are always thermally constrained because they have itty bitty heatsinks and fans. The thinner the laptop, the less space available for heatsink.

More cores = more heat. Although today's cores are more energy efficient than they've ever been, it still takes more power to run 6c/12t than 2c/4t in the same generation/ family.

TDP (thermal design power) is generated off the base clock speed.

Keep in mind there are H series laptop CPUs with 35W TDPs and hence a higher base clock speed.

Most basic laptop usage is "bursty" in nature (games are a common exception). There's not a constant heavy load on the CPU. Therefore you'll generally be getting the majority of your work done at frequency near/ at the max boost clock.

As long as you're not thermal throttling, a CPU is unlikely to drop to the "base frequency". For laptops, they'll run constant load at somewhere between the base clock and boost clock.

Frequency isn't everything. IPC (Instructions Per Clock) increases every generation amongst AMD and Intel individually. A single intel core running at 1GHz today may be equivalent to a 1.5GHz or 2GHz core from yesteryear.

Notice your Geekbench comparison, the cores in the 10th gen CPU are 2x faster than the 2nd gen at [potentially] lower frequency and half the TDP.
Last edited: May 9, 2020
0

SamSamSam333 said:
I was reading on Intel's website about this, they state :

where i have low starting frequency CPU, does this mean to extract performance out of the CPU it will be in turbo boost allot of the time ? And if so can it / the cooling system sustain longer periods turbo boost, or is the CPU intended to run at 1Ghz most of the time on simple tasks and just turbo boost occasionally ?
Click to expand...

It depends on operating system and software running at the time, at true idle it should run at 1GHz or even lower but at higher loads it will engage necessary cores and boost speed on them,
That saves power and on heat generated. Large difference in idle and top speed is due to battery and heat sawing, wuite important for laptops.
0

Thanks @tennis2 , so is the CPU benchmark score a better way to make a comparison than GHZ / Cores / Threads ?

The Dell laptop in question is replacing the HP laptop which had the 7200U i5, are you able to comment if the Dell Laptops CPU will be more powerful that then HP Laptops ?
0