Quick question - I've just dusted off my i-5 6600 msi z170a gaming m5 PC to just run as a server - I've put some newer RAM in I have specifically this stuff which is rated via XMP up to 3000mhz, but the BIOS shows it to still be running at 2400mhz despite the XMP profile being correct.

I'm not overly worried as the performance difference is probably imperceptible, but just wondering why this is and if there's a very quick fix for it?


Picture of the bIOS screen if it helps.

ThundyUK said:
I've put some newer RAM in I have specifically this stuff
Click to expand...

What you linked, is single DIMM. And since you have two single DIMMs in the PC, them not working together is normal occurrence. And due to this, RAM speed reverts to highest stable JEDEC speed, which in your case, is 2400 Mhz. In this sense, you're lucky, since default RAM speed for 6th gen Intel is 2133 Mhz.

As of why two single DIMMs doesn't work together, and why it is a bad idea to buy single DIMMs in the first place,
further reading: https://forums.tomshardware.com/faq/troubleshooting-problems-with-pc-memory-ram-and-xmp-profile-configurations.3398926/

If you want guarantee that 2 or more sticks of RAM work together, always buy RAM in a set.
Reactions: ThundyUK
0
T

Hmm....They're identical - both DIMMS are the same.

But even ordered at the same time they're not the same? Is that what you mean?

ThundyUK said:
.They're identical - both DIMMS are the same.

But even ordered at the same time they're not the same?
Click to expand...

So, you bought two individual RAM sticks at the same time? Right?
If so, the chances of two individual sticks working together, despite being same make, model and spec, is 50:50.

For that reason, guarantee that two RAM sticks will work together, RAM sticks are sold in a set.

So, if you want to have two RAM sticks working together, you need to buy a set of RAM, where both sticks come together, in a sealed plastic housing.
Sure, it costs more money and leaves you with two, unusable sticks of RAM (your current RAM), but like said, chances of two individual sticks working together are 50:50. And you already took that chance and didn't get lucky.

I didn't take the risk of RAM lottery when i upgraded my Haswell build's RAM amount (full specs with pics in my sig), instead, i went with the set of two off the bat and kept the old RAM as backup. 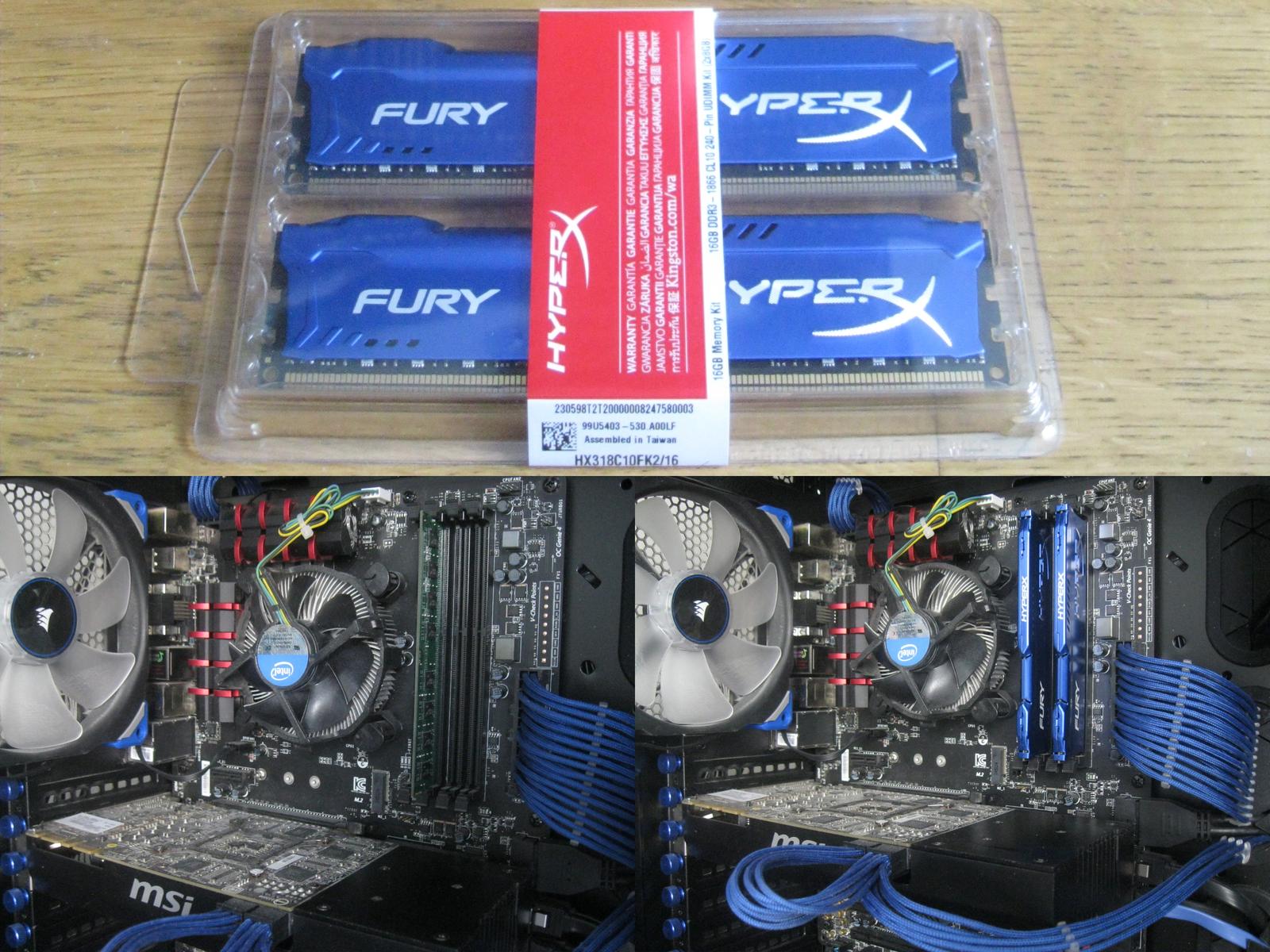 Okay cheers for the detailed explanation.
I mean they DO work fine just only at 2400 mhz. So I got unlucky there, but from what you're saying I could also be considered to be lucky that they work at all?
Or is them working quite likely, just not at the XMP speeds?
0

ThundyUK said:
So I got unlucky there, but from what you're saying I could also be considered to be lucky that they work at all?
Click to expand...

In an essence, Yes.

You could have it far worse, where your PC doesn't POST with 2 individual sticks in it. Or be a bit more lucky, where PC boots up, but isn't able to detect 2nd RAM stick. But since you get both sticks working, and higher than default JEDEC speed of 2133 Mhz, at 2400 Mhz instead, you're pretty lucky.

In BIOS, you could try to manually set your RAM to 2666 Mhz and look if it holds. It might, or it might not.

I have nearly the same build, my Skylake build has i5-6600K with the very same MoBo as you have; MSI Z170A Gaming M5 (full specs with pics in my sig).

For me, i was lucky that two sets of RAM did work together, and i was able to get all 4 sticks of RAM running at their rated speeds of 3000 Mhz. But i also did my level best to ensure that this specific Kingston RAM, is supported by my MoBo (looking from MoBo memory QVL list), when all 4 RAM slots are populated and RAM speed is 3000 Mhz. <- This latter is something, most people doesn't do, to look up from MoBo memory QVL list, when choosing a RAM. 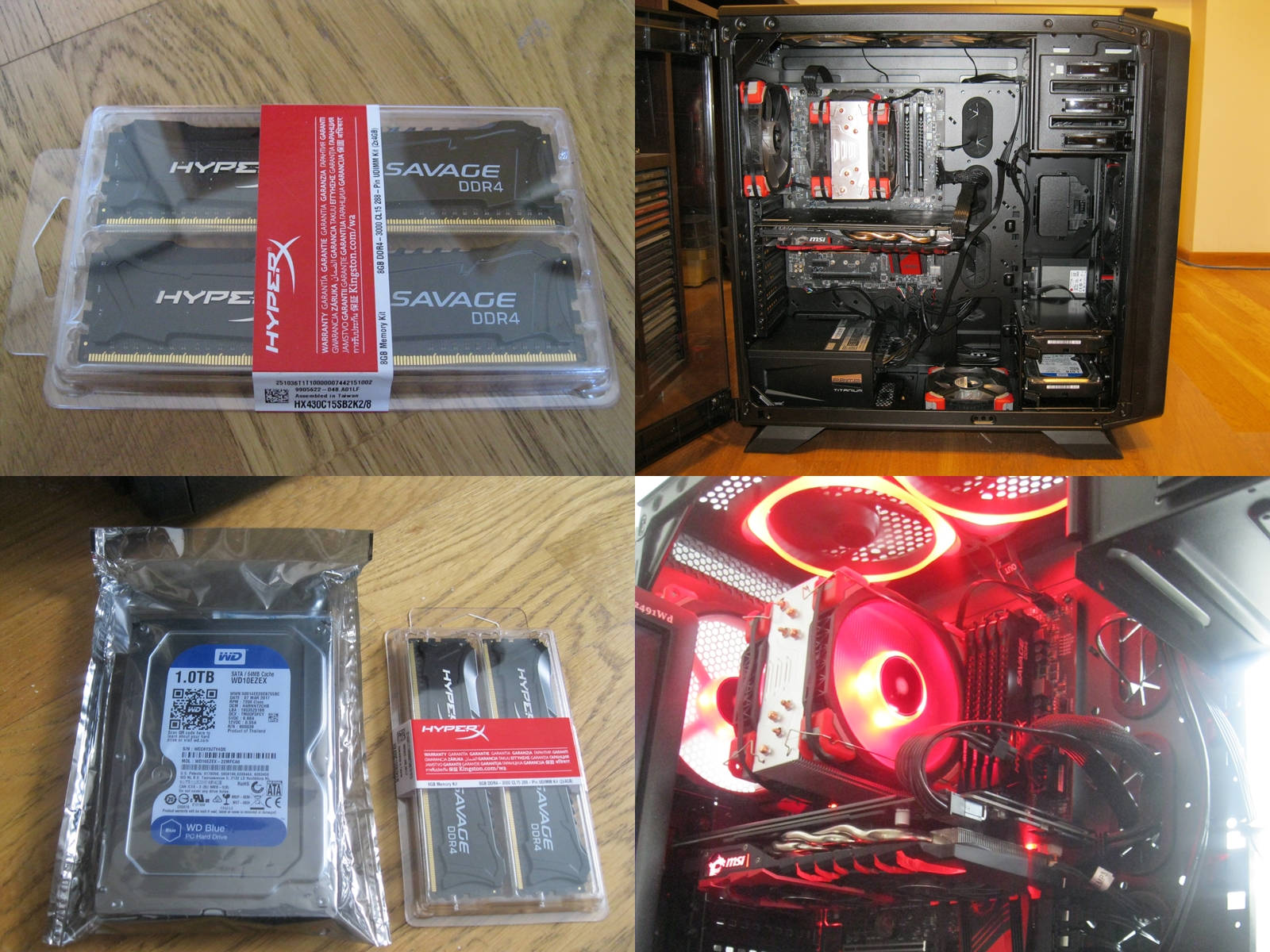 Your rig is remarkably similar looking to mine

You're definitely right about DD3 my older rig has 16gb in and it's four different types of 4gb modules - it works, but I can't enable XMP.

Again really appreciate the detailed explanation - I was only aware not to mix types (manufactures, speeds, size etc) but not to this extent where even the same type and model isn't really the same !
Reactions: Aeacus
0

ThundyUK said:
Given that I got lucky this time I'm actually temped to order a 16gb kit of the same model and see what happens when it has 32gb of three different bins

You can play the RAM lottery if you like. At best, you'll have all 4 running at 2400 Mhz. Slightly worse would put all 4 to 2133 Mhz. Even worse is when you can't run 4 sticks at the same time (BIOS doesn't detect one or two sticks), and for the very worst, you lost track with of the two came in a set and which of the two are individual, whereby PC won't even POST and you have the ordeal to find out which two are in a set, and which aren't. So that, at very least you can get 2x 8GB set back into the build and running at 3000 Mhz.


ThundyUK said:
I'm not overly worried as the performance difference is probably imperceptible
Click to expand...

Hence why i went with 2x 4GB for my Skylake build. Which i upgraded to 4x 4GB. Only downside is, that when i want to have more than 16GB of RAM, i have to buy completely new RAM, while ditching the current RAM.

And even when you compare mid-range RAM (Savage RAM is mid-range in Kingston lineup), to high-end RAM, e.g G.Skill Trident Z, where besides the make and model, also DIMM amount is different. But RAM amount, speed and CAS Latency are same, mid-range RAM beats high-end RAM for a ~14%,
comparison: https://ram.userbenchmark.com/Compare/Kingston-HyperX-DDR4-3000-C15-4x4GB-vs-GSKILL-Trident-Z-DDR4-3000-C15-2x8GB/m43906vs3548

Of course, there is a good reason for that, since with more DIMMs at the same amount, you get more responsive RAM, whereby data in it is accessed much faster.
Last edited: May 30, 2022
Reactions: ThundyUK
0
T

Good shout I'll mark the sticks or take a photo of the empty slots beforehand so I know what's going on.