Previous Next Sort by votes
F

I've recently been having this problem where my I5-7700HQ steadily dials down the clock speeds from its normal 3.3 GHz all the way down to 0.57 GHz while gaming. The temps usually range around 85 Celsius and occasionally reaches above 90 C, but drop down to 60 to 55 Celsius while the clock speeds reach 1 GHz. The GPU from what I see doesn't have any problems, and runs at normal clock speeds while being about 8 Celsius cooler than my CPU since the heatsink and heatpipes are GPU prioritized. The problem arrives after few minutes in games like CS:GO and League, and on HWMonitor I saw the multipliers dial down steadily the same way. The same thing occurs in reverse to the CPU's clock speeds; I'd close the game and let the laptop idle for few minutes, and the clock speeds steadily rise back up to normal.

I am not sure if it is thermal throttling or a hardware related issue, and I have removed Intel's Dynamic Platform and Thermal Framework prior to prevent Power Limiting Issues. If it was still installed, the Power Limit Throttling would usually cap the temperatures below 80 Celsius and the clock speeds would limit to 2.36 GHz. I have also done a repaste on the CPU and GPU die, and replaced all the thermal pads on the VRMS.

Below, I have a posted picture from Intel XTU of how the speeds look on the chart. Time Frame "A" is when the laptop is under load when I'm running on CS GO. Time frame "B" is the laptop at idle. 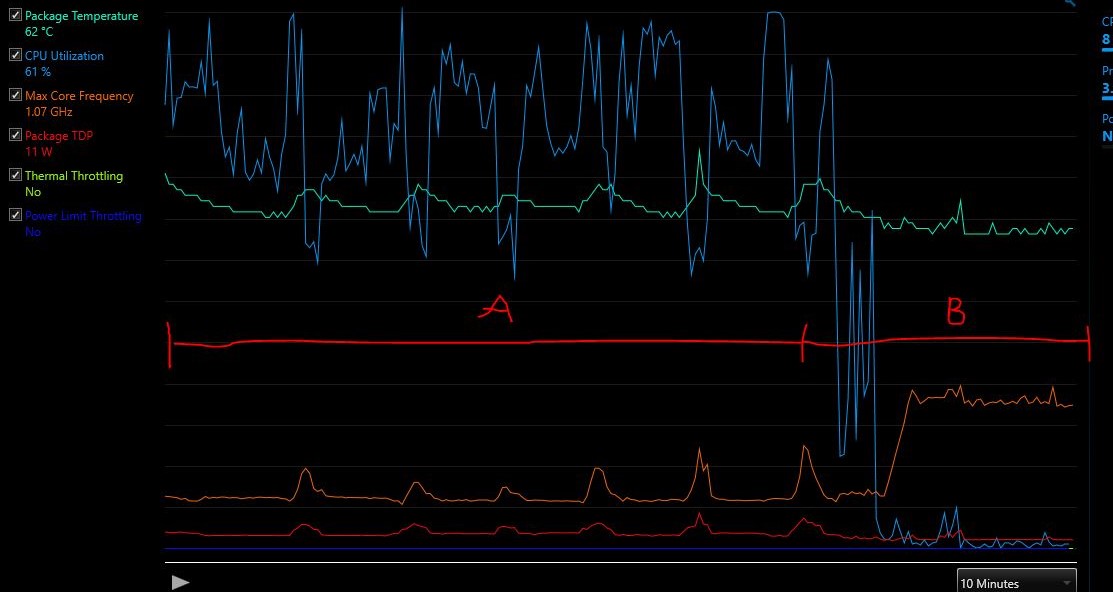 Can anyone help me figure out what could be wrong with my CPU? I am worried that something may have been scorched.
Last edited: Jun 2, 2020
0
F

I fixed the problem now.

You need to run this power shell to keep the CPU from throttling down.

It will keep the CPU running at max clockspeeds regardless, and shouldn't dip anymore unless temps throttling above 90C. Otherwise, then it would probably be a cooling issue.