I've marked the most helpful answer as it will help you diagnose the problem, if you want to see my solution go to the last post on the thread.

So I've got a Intel Celeron N2830. Since the past couple of days I noticed it was getting very unresponsive, it wasn't very responsive to began with but it become very bad in the past couple of days. I noticed in the task manager that the speed of the CPU was limited to 0.5Ghz at 23% util. So after searching on Google I found https://forums.tomshardware.com/threads/cpu-speed-stuck-at-0-5ghz.3387209/ and followed the steps in it. I disabled SpeedStep in BIOS, it didn't help. Then I installed HWInfo and ran in sensor only mode. It said that both the cores are thermal throttling at 48C and 46C repectively, which I don't believe is a tempreture any CPU should be fine at. The post also instructs to uncheck BD PROCHOT but the option is unavailable in ThrottleStop, ie greyed out.

Before all went wrong I did mess around a bit in ThrottleStop but nothing serious and remembered to changed everything back to normal before exiting. I remember lowering the Clock Mod, the Set Multiplier and Voltage ID to a valve one step lower than the current, then immediately changing them back to normal. I also remember the CPU used to use 1.5W (Intel page says it has a TDP of 7.5W thos) instead of the 0.4W it is using right now.

Oh also the system is stuck in a update loop basically it downloads an update then applies it over a very long time like hours then suddenly powers down and when restarted reverts the update, then repeat. But thats another issue for another time.
Last edited: Aug 25, 2021
1
F

dentfuse said:
Another thing I'd like to add is that I tested on Linux as well. Same results, ie cores at 0.5Ghz
Click to expand...

You could try going into the bios and loading optimised default settings, save and exit
0
D

Another thing I'd like to add is that I tested on Linux as well. Same results, ie cores at 0.5Ghz
1
F

dentfuse said:
Another thing I'd like to add is that I tested on Linux as well. Same results, ie cores at 0.5Ghz
Click to expand...

You could try going into the bios and loading optimised default settings, save and exit
0

its obviously a bios problem

do you have latest on the board? If it happens in linux & windows, its not software.
0
D

Flayed said:
You could try going into the bios and loading optimised default settings, save and exit
Click to expand...

Ok so I did that and a lot of errors popped up. 2 of which I recognise from before, one being an unidentified battery (even tho it's the same battery that came with the laptop, last year during COVID I was unable to use my laptop for around 6 months, which idk how damaged my screen to cause a black spot on screen and an unrecognized battery) the other being an unrecognized adapter (I had to buy a new adapter of same polarity and same specs, Its from dell too but still unrecognized)

The newest issue I see the a line saying "The system will adjust the performance to match the power available, Please connect a Dell 65W AC Adapter or greater for best system performance". Then the usual F1, F2 stuff. 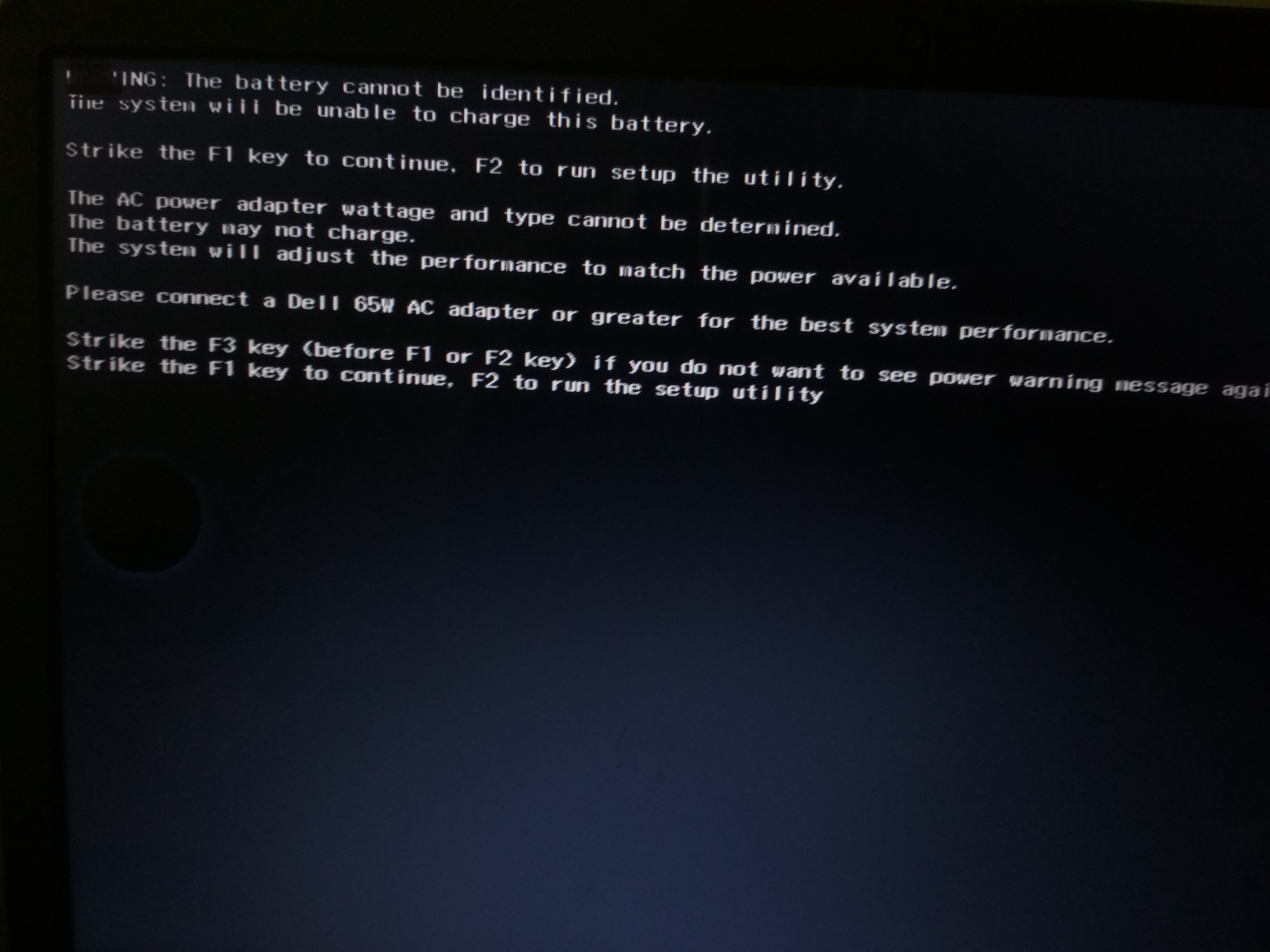 So I tried chaging the adapter to another one I had lying around, but it wasn't the right socket so I couldn't use it. I just changed the 3-pin cable that connects to the actual adapter and it worked! I'm not sure why or how, but it did. I'm assuming that due to prolonged use, sparks may have caused a carbon buildup on the terminals of the older wire, but I can't be sure.

After a couple of restarts and testing, the adapter warning has gone away ie the laptop actually detects a Dell adapter (HWInfo says its 90W but its actually 65W :/) and during the last restart the battery warning disappered too, but the battery still isn't charging, so I'm not sure if I'm supposed to be happy about that or scared. Also I haven't hidden any error messages in BIOS like before.
You must log in or register to reply here.
Share:
Facebook Twitter Reddit Tumblr WhatsApp Email Link