Apple proclaims that the iPad is magical. Steve Jobs himself said that it would be one of his most important works of his life. But is there a story to the iPad that the public doesn't know? We take you 38 years into the past, when the iPad was invented.

The ipad is an ipod touch for giants. The apps are too expensive as well.

Great article that provides insight and historical perspective to what is happening today.

Apple didn't steal anything. They invented the tablet, computer, portable music player, phone (it isn't a smartphone unless it has multitasking, which they will invent for OS 4) and other overpriced devices.
They will invent a time machine, go back into the past and sue the guy.

Looks like Steve Jobs is Charles Darwin while Kay is the Alfred Russel Wallace. One hankers for fame & publicity while the other basks in success, but in the shadow of the former. No marks for guessing who should get the more respect ...

[citation][nom]dan117[/nom]Apple didn't steal anything. They invented the tablet, computer, portable music player, phone (it isn't a smartphone unless it has multitasking, which they will invent for OS 4) and other overpriced devices.They will invent a time machine, go back into the past and sue the guy.[/citation]
Are you being sarcastic? Apple didn't event any of the things you pointed out.
M

Quick down to the patient office to register Dynabook.

Great read, albeit rather long. Just continues to prove there are now new ideas in computing, simply improvements on existing ones.

[citation][nom]tuannguyen[/nom]Are you being sarcastic? Apple didn't event any of the things you pointed out.[/citation]
Not at all. Apple is the best company ever, if they didn't exist, we would all be without all this great technology. /sarcasm

Wasn't it obvious when I got to the part about time travelling.
M

[citation][nom]dan117[/nom]Not at all. Apple is the best company ever, if they didn't exist, we would all be without all this great technology. /sarcasm Wasn't it obvious when I got to the part about time travelling.[/citation]

It was obvious after the first three words. "Apple didn't steal"
S

The ipad is a POS in my opinion, if you really need something for "apps" and music get the ipod touch. If you need a bigger screen get yourself a laptop its that simple. I really do not see the hype behind this product.

Here is a color version of the image.

The iPad is a fanboy toy and nothing else. I could have done better but people would have complained about it being thicker and not being paper thin.
E

That thing looks more like a concept for a laptop or a very large calculator than anything else and what was that link that doesn't show iPad news again?

[citation][nom]maxiim[/nom]The ipad is a POS in my opinion, if you really need something for "apps" and music get the ipod touch. If you need a bigger screen get yourself a laptop its that simple. I really do not see the hype behind this product.[/citation]
Agreed, i found it quite disssapointing also.

Great read. I don't really care about the questions or implications of the title, but I was just interested in the actual data- pretty darn cool stuff.
Z

did someone actually read all of this
S

When I think of the future of computing I see software à la Linuxmce where you connect everything and anything + ease of use. Also, a lot more interaction with the computer, eg. the sixth sense device, as well as be able to command (single & scripts) the computer with natural sentences. There are many occasions where you spend ages doing easy but time consuming recursive tasks (eg. copy paste many single entries into something else) that a computer could do in a second if it knew what to do.
T

This is the most insightful look at computing I have ever heard. Peeling away the Apple fanatics and the role that Steve has had in computing, I was enthralled to learn that true genius had the vision to predict where we would be 30+ years later. It reminds me of the visionary thinking that imagined, in the 1920's, geosynchronous orbits. They also took 30+ years to become a reality. I also see a parallel with the significant push by Arthur C Clarke to steer our thoughts to using them for the now supremely prevalent communications relays that we rely on daily. I hope that this article also opens the minds of a new generation to want to continue to strive for the depictions in Kay's mind! At this rate we may just achieve that society imagined in the Star Trek series.
E

It mystifies me why the iPad should provoke all this philosophising and talk of "innovation". It's just a big iPod Touch, isn't it? Making something that you've already made - only bigger - is hardly worthy of someone's lifes work, is it?

Why do any of Apple's gadgets provoke such a furore? They're cool, but no cooler than hundreds of other cool devices.

I guess I just don't get it. Koolaid, anyone?

[citation][nom]dreamphantom_1977[/nom]The dynabook doesn't even look like the ipad. You want to know where he stole the idea from? Yep.....Star trek. From the original Star trek to Star Trek Next Generation (which came out in 1987), voyager and up they have been using devices just like the ipad. Here is a video and pics, see for yourself. Yeah, they weren't real, but the concept was there. Full touch mini computer with it's own O.S. If you ask me I think apple should pay royalties to Gene Roddenberry. Apple never has it's own ideas. Always steeling them. That why apple gets sued so much.http://www.youtube.com/watch?v=yVq [...] re=relatedNotice the center button just like the ipod and ipad? (below)Probably the best example (below)Almost every one of these devices works like an ipod, small touch screen mobile computer, and on most of them they used there finger just like people do with the ipad, ipod touch. Want to see what else became real from Star Trek?[/citation]

While the datapads from star trek were the first things I thought of when i saw the ipad could you plz keep it to 1 or 2 pics.

Also one thing Id like to see is a "global" from "Earth: Final Conflict" A pull out video cellphone is pretty close to possible now with FOLED and 4g networks. 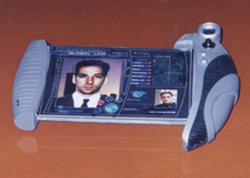 Though with a global, people would be crashing on the highway about 10,000% more lol

Now that is one hell of a article, kudos to you Mr. Editor Man.

When a new idea comes around, and we follow through with it, the only next step is to do it all over again.

If we think this way Dell HP and all the other computer company's all store the idea of a PC, laptop, all in one from microsoft or whoever invented those.

I very much agree with Alan Kay that the App Store is an unfortunate aspect of the iPad. In fact, the fact that DOS had BASIC, while Windows doesn't come with any programming language, is bad for the same reason.

Microsoft does make free versions of its compilers available now, but they're obscure and it's not clear how useful they are... if Visual Basic Express were put on the Windows installation media instead, perhaps with suitable modifications, this would be a very good thing.
G

Pretty remarkable for 1968 when computers took up huge rooms in the basements...

Excellent work that opens doors to other parts maybe predictable future tech.
I hope we can all feel that shivers in our spine when we discover new tech and help humanity improve but of course balance is the key because we need the wisdom to balance responsibility. Kay was amazing and I understand his point of view now its up to us to take it further and "go were no man has gone before"