Question DirectX (DXGI_ERROR_DEVICE_REMOVED) on FIFA 19 with no fix

So here's the deal: First off, I've got a Lenovo Legion Y-530 laptop with a i7-8750H and a Nvidia GTX 1050 and yesterday I bought FIFA 19 on Origin and installed it right away to play with friends with mine who had the game.
I ended up downloading the game and spending hours trying to fix the game because of it crashing.

The game crashes at the start when you have to press a key to start playing, and it only crashes after I press any key which makes the game start loading data.

The first few errors I was getting with DirectX weren't fixed by nothing I did in my computer, not even adding "TdrDelay" on the Registry Editor and whatnot.

So the current error (which has the same denomination as the previous ones) is as follows in the screenshot:

I've updated both of the GPU drivers (I have an Intel HD integrated graphics card and a dedicated Nvidia one): I've managed to install the intel driver through the website (which didn't fix it) but Windows Update rolled it back through an update and I've updated the NVIDIA driver to the latest one.
The "Driver #1" version that's showing in the screenshot is referring to the Intel GPU and "Driver #2" to the driver version of the GTX 1050 on Windows.

I've tried limiting FIFA 19 to only 4 cores on Task Manager because it consumes 100% of the CPU and I've read online that it could be the cause - It wasn't.

I've done a full scan with MalwareBytes and deleted the malicious files that were found.

I thought it could be due to the program using graphic resources from the Intel graphics card and not the NVIDIA (which is more powerful, obviously) because the error that I had before mentioned in the end part of the message that I should have a graphics card with 512MB of memory or more. I've changed the default graphics card for the game but whenever I start the game (which doesn't even go full screen idk why) the percentage of use of the NVIDIA card stays at 0% so I thought the problem could be due to the wrong GPU being "assigned" to run the game (a problem I couldn't fix)

Can someone please help me on this matter? This is seeming really impossible to fix and I'm going crazy! [redacted]
Last edited by a moderator: Apr 26, 2019
0

Try and make sure you're on the latest BIOS update for your motherboard. Which version of the OS are you on?
0

Lutfij said:
Try and make sure you're on the latest BIOS update for your motherboard. Which version of the OS are you on?
Click to expand...

Did this also, didn't change anything though
0

Should this help to the answering of the question, I snipped this off my Task Manager, where the two gpu spikes at the same moment represent what happens, in the game, when I press Enter or Space (which is what you need to press to get past the starting screen) 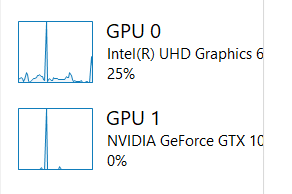