Question Do i need 8+4pins to the CPU?

I've read that it isnt necessary to connect the 4 pin to the CPU power on the mobo as long as I have the 8 pin connected.
But since my new MSI MPG Z390 GAMING PRO CARBON and i5 9600k won't post anything on the screen im wondering if I have to have both 8pin and 4pin connected to the "CPU_PWR" to make it work?
I've tried almost anything but THAT so is there a chance that this mobo or CPU needs both?
0

Manual states to use both CPU power , not listed as optional.
0
F

Still nothing.
Managed to fit an 8pin pcie cord(with a little modification) into the CPU_PWR1 and put the 4pin, that I already had, into the CPU_PWR2 but still it didnt post. :/
1

You may have just fried your CPU and/or motherboard. You are not supposed to use an 8 pin PCI-E to power the CPU, the pin outs are different. There is an 8 pin EPS connector that you are supposed to use (often put on power supplies as a 4+4 connector). If your PSU doesn't have the right connector, then you need to get a different power supply, or look for an adapter (not recommended).
Last edited: Apr 6, 2019
0
E

Fameroun said:
Still nothing.
Managed to fit an 8pin pcie cord(with a little modification) into the CPU_PWR1 and put the 4pin, that I already had, into the CPU_PWR2 but still it didnt post. :/
Click to expand...

?!?!?!?
You forced in a power connector?
You may have just ruined your CPU and Motherboard.
Nothing forces, everything just "fits".

You could have just killed everything.
0 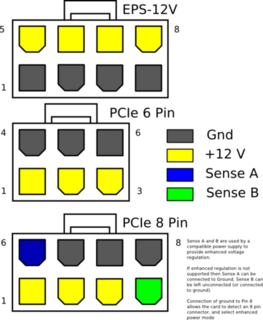 They are not only pinned totally differently, they are keyed (squares and D's) different.

If you jammed a pcie into the EPS connector then you seriously just scr****d the pooch.
0

Honestly an i5 shouldnt need more power than an 8 pin can supply, so i doubt that was the issue. Now you have more issues to deal with... I dont know how you could force a vga power connector into the eps power port. Its nearly impossible. The saying "if it doesnt fit, dont force it" is very true.
0

Well if a truck can run on diesel, my car will too, does it matter what comes out of the gas pump?

Well its not an uncommon mistake. I tried to put a vga connector into the eps port once. I gave up once i realized it didnt fit, however its not that uncommon of a mistake and i understand how you could think it should work. You should never modify components to fit. If it doesnt fit, there is a reason it doesnt fit. People with a lot of experience (not to mention collage degrees) designed the plugs that way for a reason.
0
F

I didnt modify the plastic on the pin, i modified the cables. 12v upper row, ground on the lower row. Just like in the picture.
THO... earlier when i got the cpu and mobo i thought the 8pin pcie would fit the cpu pwr (which it did). placed it there and it wouldnt start at all. after a few minutes i understood why so that might have caused som problems...
0

Just try to run it with just the 8 pin. You may need to troubleshoot elsewhere. I would check ram and psu.
0
F

Well it isnt very much i can do with my tools rn. Psu voltages seem to be right, and I dont really know how to troubleshoot ram. Might just put it on service and see what they say.
0

Try moving the ram into different slots and trying each stick individually. Make sure socket pins arent bent and gpu is seated.
0

Fameroun said:
earlier when i got the cpu and mobo i thought the 8pin pcie would fit the cpu pwr (which it did). placed it there and it wouldnt start at all. after a few minutes i understood why so that might have caused som problems...
Click to expand...

This is EXACTLY your problem, I suspect. It doesn't matter that you correctly changed the pinout of the PCI power cable to match that of the EPS pinout, because you FIRST tried the PCI cable without having done that, which is likely when you created a problem where none existed before.

I've not seen any board, yet, that would not at least POST with only the 8 pin (4+4) EPS connector plugged in and not the second 4 or 4+4, depending on the board. Every board I've seen that has a second EPS socket has stated that the additional EPS connector is ONLY for extreme overclocking. Even when using a 9900k.

The fact that the motherboard doesn't state it as being optional does not sway me from the opinion that the system WOULD post without it. It might suffer from power delivery at high frequency sustained loads, although I doubt it, but even if it did I don't believe it would stop the system from being able to start up and POST. It's a LOT more likely that trying to use that PCI/PEG connector in the EPS socket BEFORE you changed the pinout, is your problem. Likely your board is toast now, as just about everybody here has already said.

It is of course always POSSIBLE that something else is to blame, so it's worth double checking EVERY SINGLE OTHER THING as listed at the following link, but that is only to be certain it is not something basic like memory that isn't seated well or a poorly seated 24 pin ATX connector.

Usually after a power supply fails and delivers excess voltage to a board, the motherboard (usually input filtering capacitors or other components down the line) will fail not allowing the current to fry the cpu. I would assume a simmilar thing would happen if a connector was plugged in wrong, but anything is possible. I would check the motherboard to see if anything looks blown. I would also make sure the psu itself wasnt harmed by the incident.
0

Well the first plug put the 12v directly to the ground plane, which guaranteed would have tripped protections inside the psu. If not done yet, you'll need to unplug the psu, push the power button and hold for 20 seconds to drain as much residual power as possible, and hopefully the psu once plugged back in will start.

Not sure honestly that there will be any mobo damage as it wasn't over-powered to the circuitry, that 12v will go to ground before running backwards through the mobo.
0

Who knows what damage occurred its all an unknown. A short to ground will for sure cause the pc to stop working and cause components to get very hot until a safety trips or the power is removed, but it is unlikely to have killed anything major. If 12v went to a 5v rail or something it would be a lot worse, but those plugs only have a 12v rail so this wouldn't have happened. I'm not sure what the sense pins do, but a short to ground there probably produced similar results. I agree to reset the PSU and try again. If it still doesn't power on either somethings fried or were back to the start of the thread where the pc wouldn't boot and there was no pcie power plug plugged in where it didn't belong.
0

I guarantee you that 12v directly to ground with no resistance across the circuit will ABSOLUTELY burn out a trace on the motherboard, IF that is what happened. Those traces are not designed to handle unregulated amp loads in that manner. Still, I agree it is totally worth trying to reset the PSU first to see if perhaps the protections were tripped and only need to be reset.
0

I didn't concider that it could burn a trace. I watch a lot of louis rossmans macbook board repair and usually when a macbook has a short to ground it just doesnt power on and the board gets very hot. If you fix the problem component the motherboard will usually work with no damages other than a fuse (or resister used as fuse) being blown. A quality desktop psus 12v rail can deliver much more power than a macbooks psu supplies it, but i still dont think that it would immediately be killed, depending on how long it took safety to trip or the pc to be unplugged.
0
E

If you get a wire, and short it across your Car Battery Terminal, tell me how long it takes before a 1mm cable melts...
Then imagine that on something that is about 0.1mm (10 times smaller) how long before that shorts out.

Anyway you may just be lucky and all will work, or you send it back and they say - no refund because you did it wrong.
0

If sonething got hot enough to start burning a trace i think he would have smelled or saw something. Likely the psu safety saved his hardware. I still would reset the psu.
0

Here's the thing though. You're not just shorting to ground. If it was only a matter of touching 12v to a grounded circuit, that would be one thing. In this case, with the EPS socket, those ground pins are SUPPOSED to go to ground back through the PSU, which means the other end of those pins is not ground, it's something. Like the CPU, or the voltage regulation components. Hitting them with 12v sends power directly to the wrong side of those circuits that are supposed to be grounding out through the pins where power is currently attached. It also means that GROUND is now attached to where power is supposed to be, which could as well be a problem. Obviously it's POSSIBLE that nothing bad happened, I just wouldn't hold out a lot of hope or be too disappointed if that doesn't turn out to be the case, because it's unlikely.

These systems are delicate. Anytime you put something where it doesn't belong, there tends to be a bad result. Protections or not.
0

True. The ground plane is on the backside of everything. So the other end is attached to the cpu etc etc. However, funny thing about electricity is that invariably it always follows the path of least resistance. It's going to take the shortest, fastest, least resistance path, which happens to be through the motherboard ground plane to the nearest screw attached to the mobo standoff, through the frame to the psu ground. If it's even a halfway decent psu, that's going to trip the OCP/SC protection right quick, with the unfortunate side affect of being the larger the 12v rail, the higher the amperage ceiling before it trips.

So here's hoping op has a decent psu with decent protections, if it's a piece of junk with minimal protections (if any at all), the chances of damage are much higher.
0
F

Darkbreeze said:
I guarantee you that 12v directly to ground with no resistance across the circuit will ABSOLUTELY burn out a trace on the motherboard, IF that is what happened. Those traces are not designed to handle unregulated amp loads in that manner. Still, I agree it is totally worth trying to reset the PSU first to see if perhaps the protections were tripped and only need to be reset.
Click to expand...

Nothing looks burnt what I see and the PSU runs perfectly when attached correctly so there shouldnt be any protections tripped? I also measured the voltages. I'm thinking that maybe there are protections on the mobo too?
Else something is fried for sure, and hopefully not the cpu.
0

I dont know of protections on the motherbloard. I would again start troubleshooting other things to see if it starts. Start by checking ram dimms individually.
You must log in or register to reply here.
Share:
Facebook Twitter Reddit Tumblr WhatsApp Email Link