I have been using EASUS TODO BACKUP (FREE) for several years and recently had a system failure and needed to rebuild. There are image based recovery tools and there is also a file based recovery operation from the backup files that the program creates. The backup format uses the file extension .PDB. There is a windows shell extension that actually lets you browse and open the pdb files much like Windows explorer lets you browse Zip files as if they were folders, along with some "extra delays" as it reads/indexes the pdb content. Right clicking from that explorer extension in windows explorer windows, lets you restore to "original location" or to any designated path. So far so good.

My problem is that when I want to restore the entire disk (330 gb compressed, about 600 gb uncompressed) the restore speeds are glacial. The restore process runs for over 80 hours before even showing any percentage completion, does not actually show the elapsed clock time, I just know I started this operation on Friday at 1 PM and it's now 8 AM monday morning local time, and it's been running, and says "31% complete" and estimates 88 hours remaining. The control panel power settings on this PC are set to never sleep/lock, but the screen is being allowed to go dark to avoid burn-in on the panel.

My question is, has anyone completed large restores to "c:\Recovery" (not original location) with OTHER backup software that offers a hybrid approach (backing up to files similar in nature to the Easus PDB files) that has a less insane restore speed for "restore 600 gb files"? Note that to remove any speed problems CAUSED BY THE EXTERNAL USB disk, I copied all the backups onto my main system SSD, which is a very fast modern NVME ssd. (Samsung 2 tb 970 evo plus). All the slowness is due to the easus program code itself and its navigation of these pdb files. I can restore a set of <1000 files totallying 10 gb or less in minutes. It's just when you start doing the "entire drive C and everything underneath it", it becomes slow.

The actual file restore process is managed by something called TbRestore.exe which seems to burn ONE CORE (on my pc, fixed 8% cpu usage) as if the developers at EASUS are stuck in 1998 and have implemented file restores that are single threaded, synchronous crawls. The disk is barely being read, less than 15 MBytes/sec. In short, I could write a better backup system than this with batch files.

1. opinion advanced: if file recovery matters to you, avoid Easus TODO if you have 300+ gb of data.

WPostma said:
2. question: What has FAST file based recovery for 300+ gb data backups?
Click to expand...

Fastest would be lossless (clone) backup, rather than compressed. Since with lossless, all that is needed for recovery, would be copy/paste.

Only downside of the lossless backup is, that you need lots of storage space (since you won't be using compression).

Now, there are several different lossless backup methods, but here are what i use:
The cloning (or copy/paste) can be automated as well. Either by small scripts that automatically do the cloning for you, at user defined intervals, or full-blown backup programs.
RAID is another form of automated lossless backup format. Further reading: https://en.wikipedia.org/wiki/RAID Though, when RAID controller happens to go belly up, it would be very hard, if not impossible to recover data in RAID array. (Hence why i, personally, don't like using RAID.)

Our resident expert on data backup, @USAFRet can give you far more info regarding data backup, if he happens to see this topic.
Here's what he has in use, topic: https://forums.tomshardware.com/threads/what-is-your-backup-situation-at-home.2997205/
0

Something is wrong with your overall procedure, or the hardware.

From personal experience, recovering after a failed SSD...

Full/Incremental Backups with Macrium Reflect,
960 GB SanDisk SSD, 605GB data on it.
It failed. Totally.
Nightly Incremental backup lives on the NAS, accessible across the LAN.
Slot in a new blank 1TB SSD.

I've restored Macrium images of circa 20 GB size representing a drive of about 40 GB occupied space.

From a rather slow 5400 rpm WD spinning drive to a Crucial MX 100 SSD which is not a speed demon by current standards.

Total time....unremarkable. I think in the range of 15 minutes from memory. That would correspond to maybe 4 hours for your files on my equipment.
0

I have no doubt that macrium is that fast. And when doing TO DISK (full) recoveries, most online sources show EASUS TODO is fast. But when using their image backups to do a FILE (not image) recovery, the results are disastrously slow.
I expected there to be a cost to extracting everythign to a new folder instead of recovering the disk, but not an 80x slowdown.
0

WPostma said:
I have no doubt that macrium is that fast. And when doing TO DISK (full) recoveries, most online sources show EASUS TODO is fast. But when using their image backups to do a FILE (not image) recovery, the results are disastrously slow.
I expected there to be a cost to extracting everythign to a new folder instead of recovering the disk, but not an 80x slowdown.
Click to expand...

And using Macrium to Mount an Image as a file letter (here, the F drive) and then a simple copy to an internal SATA III SSD...

Image lives on the NAS, across a standard gigabit LAN.
Selecting and copying 500+GB/250,000+ files of data (SteamGames) 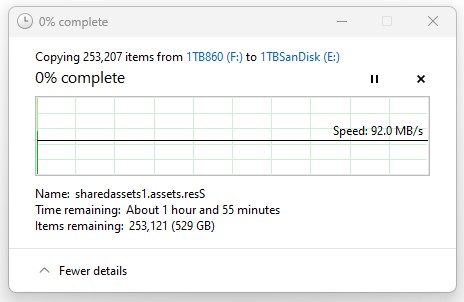 If you are trying to restore "files", is there an over-riding reason you would try to recover them from an image?

Rather than through some application that did not rely on imaging at all.....typically a garden variety "file by file" backup program that is a glorified (customized, possibly automated) drag and drop method?

You can of course recover ordinary non-OS files from a Macrium image or by using the separate file backup capability in the paid version of Macrium, but neither of those are the slickest least complicated method...in my personal experience
0

, is there an over-riding reason you would try to recover them from an image?
Click to expand...

Because the disk is gone, and because the image backup is the only backup of those files I have. NOte that EASUS TODO markets itself as a full backup solution not as an imaging tool.
0

Imaging == backup tool.
At least in the Macrium world it does.

Right now, all you can do is wait for it to finish.
After, we can then diagnose the underlying "problem".
0
L

If that is the only backup you have, I guess you have to endure its shortcomings.

I used Easeus briefly...over 10 years ago. I don't think I ever tried a recovery.

I do remember that it was a huge installation...so huge in those days of expensive drive space that I soon gave it up in favor of Macrium.
0