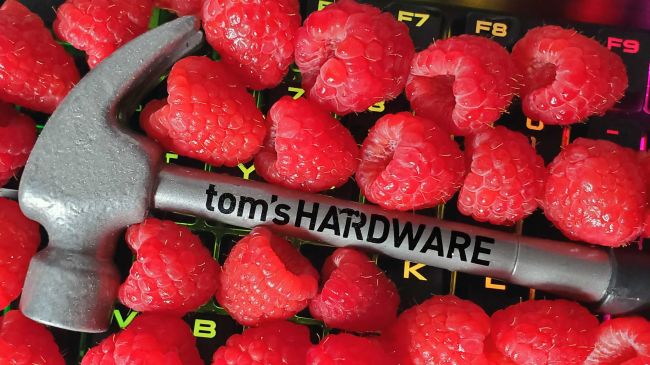 Do you have any sweet Raspberry Pi questions for the Tom's Hardware crew? Well, you're in luck!

With more than 30 million units sold and thriving communities of millions of makers, programmers and educators, the Raspberry Pi is one of the world’s most popular platforms. Now, the $35 computer that could and its ecosystem are the subjects of our new weekly show and podcast. Streaming live on Tuesdays at 2:30 pm ET (7:30 pm BST) and available afterwards as an audio podcast, the Pi Cast by Tom’s Hardware will cover everything that’s new and exciting in the world of Raspberry Pi.

Each week on the Pi Cast, we’ll talk live with special guests who are involved in developing the Raspberry Pi, creating new products for it or pushing the envelope with truly unique and compelling projects. We’ll also take some time to share tips that will help you make the most of your Raspberry Pi and we’ll be taking live questions from the audience.

Our first show launches on Tuesday, July 14th at 2:30 pm ET (7:30 PM BST) with Raspberry Pi Inventor and Head Eben Upton joining us. Upton launched the original Raspberry Pi back in 2012 and, as CEO of Raspberry Pi Trading, continues to lead its development, recently unveiling the 8GB Raspberry Pi 4 and the Raspberry Pi HQ Camera. We’ll get a chance to ask him what’s next for Raspberry PI and get his take on the state of Pi in 2020. And, if you join us live, so will you.

Tune in to the first episode at (direct links follow):
Weekly, you’ll find the Pi Cast by Tom’s Hardware streaming live on Tom’s Hardware’s channels on YouTube, FaceBook and Periscope and available afterwards on leading podcast platforms such as Spotify, Google and Apple.

Check the forums each week for the question thread and we'll work to answer as many as we can! For this first episode, hit us up with questions right here in this thread.

Tom’s Hardware’s Editor-in-Chief since 2018, Avram is obsessed with Raspberry Pi and always working on new projects with his eight year old son Isaac. In recent months, they’ve built robotic cars and retrogaming machines while learning how to program some games in Python.

Ash is a self-employed tech writer and illustrator with a serious affinity for the Raspberry Pi, 3D printing, and retro gaming. She has over a decade of IT experience and has been featured in the official Raspberry Pi magazine MagPi.

Tom’s Hardware’s Associate Editor, Les is a creative technologist and for seven years has created projects to educate and inspire minds both young and old. He has worked with the Raspberry Pi Foundation to write and deliver their teacher training programme "Picademy".
1
B

Any idea when this will be made available?
Reactions: gadgetb0y
0

Any idea when this will be made available?
Click to expand...

Update: The podcast should be available in many spots shortly. Apple is giving us a bit of trouble getting it submitted, but we're still working on it. You can also sign up for the RSS of it on AudioBoom here.

Great question! We've always planned for the show to have an audio podcast version available, but the details are being finalized. I'll update here when the show is available for download. We'll make sure to keep folks informed going forward.
Last edited: Jul 20, 2020