This started happening again suddenly (more on the first time, shortly) where whenever I'm running a game or unigine benchmark my pc stutters nearly every second for a quarter of a second. It's as if those frames of information are just deleted. Additionally, my PC in general is slowed down, characterized by how when typing the inputs are severely delayed. This continues for a few minutes after shutting the game/benchmark down as the computer seemingly whines down.

I have a Corsair SF750 on the way (Tuesday) that apart from my motherboard is the last piece I haven't replaced to fix all the issues I've had since building this PC 2 years ago.

Lastly, my User Benchmark is showing that my PC is underperforming by quite a bit: https://www.userbenchmark.com/UserRun/41697577
0

What's the Hdd used for? Didn't happen to move the pagefile to it by any chance to free up space on the ssd?

You reinstalled the B450 AMD Chipset drivers after the Windows reinstall?
0

Thanks for the answers!


boju said:
What's the Hdd used for? Didn't happen to move the pagefile to it by any chance to free up space on the ssd?

Can you upload a screenshot of spd tab from cpuz please
Click to expand...

I mostly use it to offload games from my backlog and other downloads. It does seem to be failing and I'll be replacing it soon. I disconnected it entirely to see if the problem goes away, but it remains. My Pagefile appears to still be there. 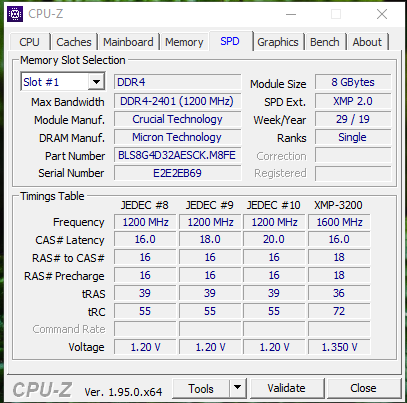 You reinstalled the B450 AMD Chipset drivers after the Windows reinstall?
Click to expand...

Hello!
Thank you very much.
0

A picture of the memory tab would be nice as well.

Well googled that ram, seems to be 3200mhzx ram so it is running below specs. Enable XMP for the ram in the bios.

There is one newer bios btw, so maybe that will help too.

What cooler on that cpu? It doesn't seem to do max boost so might be better to get temps down with a better cooler.
Last edited: Apr 5, 2021
0

Turns out I had the last piece to replace was the faulty one after all: the PSU. It had acted up with extension cables before and in one way or another on my 5700XT, so it was the first one I suspected, ironically enough.

Thank you so much everyone. I had turned off my XMP without realizing it at some point too, so I'm glad to have that performance back.
Reactions: Vic 40
You must log in or register to reply here.
Share:
Facebook Twitter Reddit Tumblr WhatsApp Email Link