Now that I got my new rig (Ryzen 9 5900x) build, I'm kind of considering of turning my old rig into a mining rig. The only thing I would need to overspend on would be GPUs in that case for my mining rig.

I transferred all of the pc components on my new tower to an older tower (which is cramped and I'm considering to buy a better one because it gave me such back pains working with it with such little space). While i was doing that, i decided to take a close look at my 11 year old PSU, flashed light on it and blew so much dust away in proximity using an electric duster and stopped the fan from moving using a pop sickle stick. All that dust was accumulated despite being the PSU covered by a dust filter (albeit I would expect it).

This is my 11 year old Thermal take Toughpower XT 875W PSU, I used it since 2010 i believe. It has not failed me even for once. I never plugged it into the wall outlet, always behind a voltage regulator. I feel like i have some sentimental value to this PSU for not having failed at me. If i wouldn't use it anymore maybe i'll just keep it as a relic. 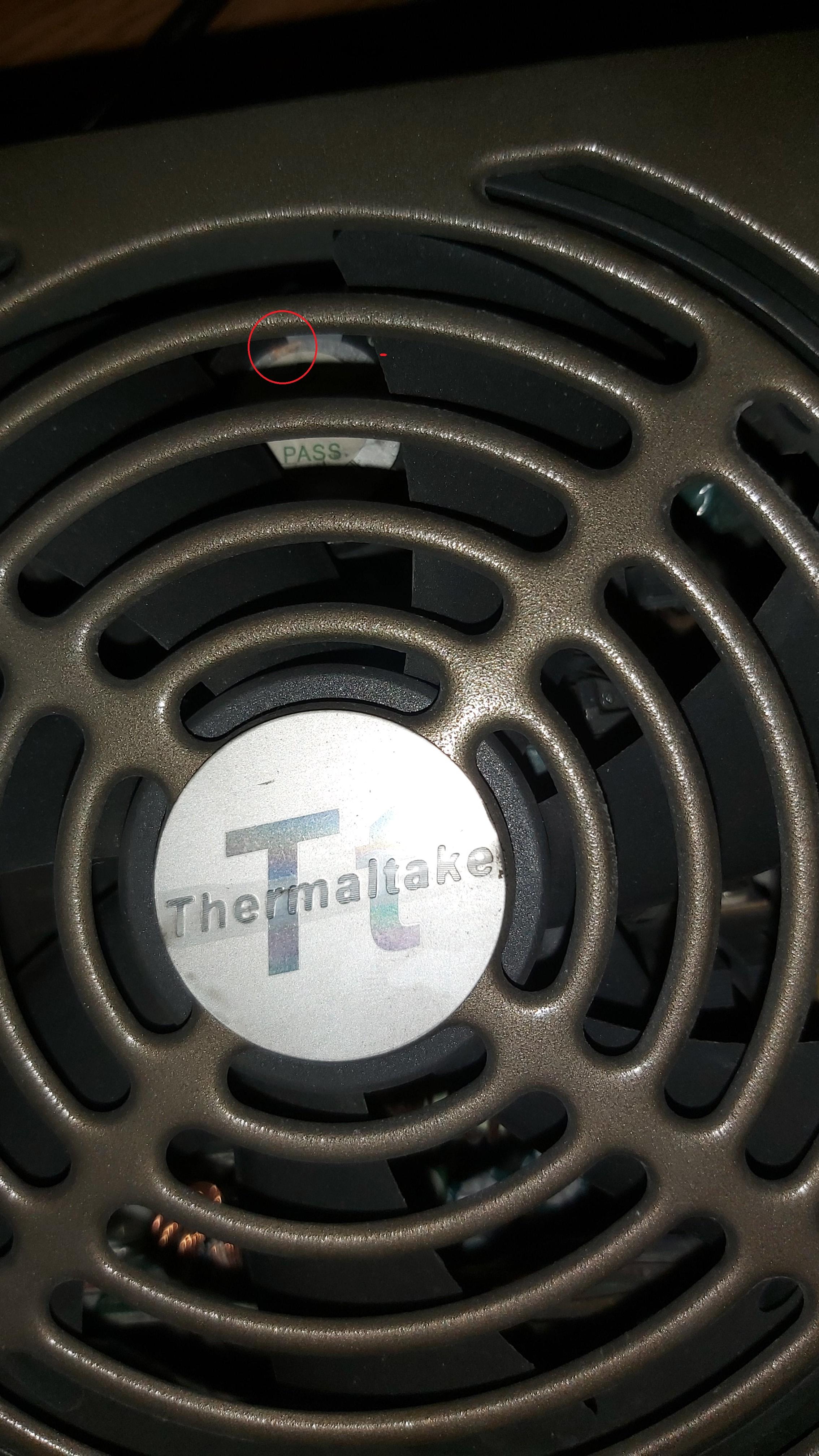 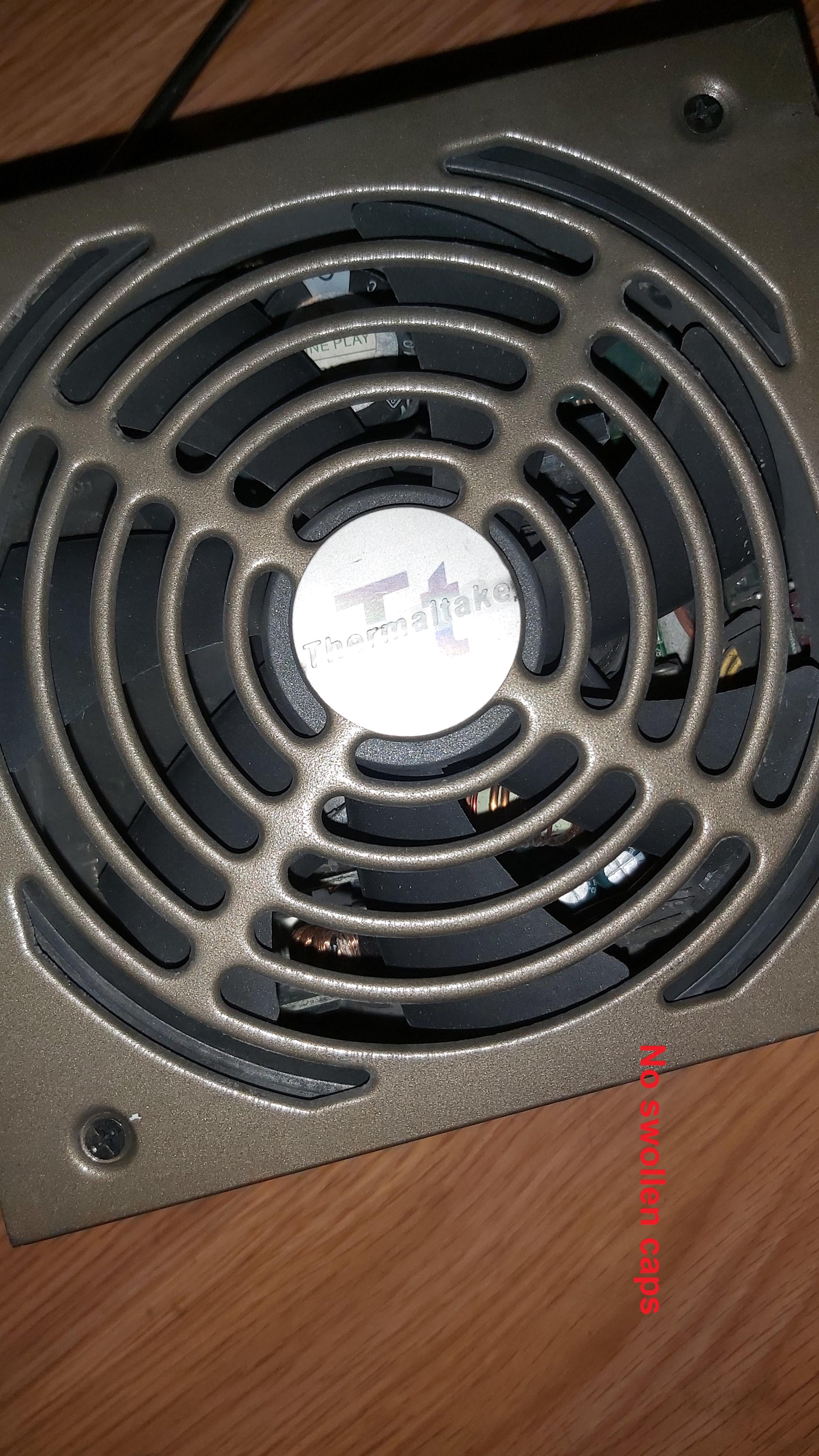 So far I cannot see any swollen caps. The only thing that caught my attention is some orange/copper-like discoloration at this part of the PSU (I don't know what that electrical component is called), which is encircled in red. Any enlightenment on this would be appreciated. Again if given the chance, I would buy another unit of this PSU just because its so good. My only complaint is that its PSU plugs are a little tight that i had to use a scalpel to remove the PCI-E plug stuck on my GPU (yes I pulled the latch upwards when I tried to remove it). It came off without any hitch though.
Last edited: Mar 26, 2021
0

You can do some testing but the testing is not under load.

And mining really creates a load.

Even if all voltages are in spec there is no guarantee that that PSU (or any PSU for that matter - regardless of age) will be able to sustain high wattage demands.
Reactions: avg9956
0

You can do some testing but the testing is not under load.

And mining really creates a load.

Even if all voltages are in spec there is no guarantee that that PSU (or any PSU for that matter - regardless of age) will be able to sustain high wattage demands.
Reactions: avg9956
0

I am a fan of using things that work as desired. There is little point in throwing something useful in a land fill...however...THIS particular unit is WELL beyond it's design usage, for sure. With that said, and assuming you want to use it, I would weigh that desire against the cost of the components you will be hooking up to it.
0
S

Use for a standard desktop build until it dies mabye? Or save it for a family member who needs a PSU?
0

Actually I just transferred it in the meantime to another case with my old PC Build for now but I do like the idea of carrying out load tests.
Of course I don't expect it to remain eternally functional, as that would be defying the laws of Physics.

Some components in that PSU would probably have degraded already.
In the meantime, its hard to find quality power supplies in the midst of this pandemic + global silicon shortage. What I'm even offered are garbage generic PSUs like Gigabyte P650B and the P750GM which is at the Potentially Dangerous category: https://forums.tomshardware.com/threads/psu-tier-list-psucultists.3624094/

I'm currently looking for a PSU to keep as a spare and for bread boarding purposes. I wonder if PSUs degrade if stored, but I doubt it as I stored that 11 year old PSU for like 2 years after I bought it before even using it.
You must log in or register to reply here.
Share:
Facebook Twitter Reddit Tumblr WhatsApp Email Link