Question Fake GTX 1050 video card? How to visually recognise this GPU with photo?

I think I may have purchased a fake 2nd hand Geforce GTX 1050 video card.
I was looking for one to run GPUGRID work units: The Pascal cards can do that very well.
So I found this no-name GTX 1050 2nd hand for 50 Euro, thinking that that was a good bargain.

And then the problems started:
To test it, I replaced my own Gigabyte GTX 1050 with this one.
The pc booted, and the video card BIOS clearly shows "Geforce GTX 1050", but I was surprised to see the GPU BIOS appear before the motherboards' BIOS. My Gigabyte card shows no BIOS screen at startup.
In Windows, I could only choose low resolutions like 1024x768 and a few others, but no FULLHD 1080p let alone higher.
The Windows Device Manager showed a "GTX 1050" but with errors, stating that it was "not fully installed".
So I tried to install the latest drivers from NVidia, and got a Windows Blue Screen.
Then I uninstalled the driver, and installed an older driver version from several years ago, and that worked:
Suddenly I could get 1080p resolution.
And both HWMonitor and the Windows Device Manager now show a "GTX 1050".

So, I decided to remove the cooler and try to recognise the GPU visually.
I am having difficulty finding the code which is on the GPU though. Luckily the RAM modules are genuine SK Hynix GDDR5 units.
I will try to upload some photos, but here is the text on the GPU:
NVIDIA
12B5B610 1121A1
S Taiwan
PAH252.M00 (or MOO)

Can anyone recognise this GPU?
Any help is greatly appraciated.

Have a nice day, and thanks in advance;
Carl Philip
0

Upload the pics to imgur.com, and post the link here.

Include pics of the shroud and display connectors as well.
0
P

Here are the photos.
How this works, it's the first time I use Imgur.

As for the video connectors: It has 1 HDMI, 1 DVI and 1VGA connector.

Definitely a fake. Have seen similar fakes with that shroud.

GPU-Z is a lightweight system utility designed to provide vital information about your video card and graphics processor.

www.techpowerup.com
Run this and show screenshot
0

Yep, the VGA port identifies it as a fake.
0
P

Many thanks already for your replies!


I had removed the card from my pc already, as it works so badly.
I'll try to install it in another pc, and run GPU-Z to see if that can reveal the true nature of the GPU.
0

I have never seen a proper gtx1050 with a vga output. It's a modern card and no card after the 900 series has support for a native analog output.

Most of the scam cards are actually much older graphics cards so they have legacy ports like VGA.
0
P

Ok thanks for the info!
I'll install the card in another pc tomorrow: I have had it for today, already lost several hours trying to identify this thing correctly.
0
P


It no longer has driver support, so I really cannot use it anymore anyway.

Many thanks;
Carl Philip
0
P

Apparently the GPU-Z printscreen was not copied.
Here it is:

It would either be 400 or 500 series. Appears that same die was used in cards such as the GTX550ti or GTS450. Pretty common for to see in these scam cards.

It's possible you could flash it back to what the GPU actually is and it would play some games and be able to use drivers from about 2018, when fermi support ended.

Overall this isn't worth the hassle and can brick the card so it doesn't work at all.
0
P

I can send the card back and get a refund.
Thanks you all for your help! Greatly appreciated.

Happy Holiday Season to you all, and be safe.
Carl Philip
0

The 24 ROP's say it's a 550ti as the 450 had 16. There were some of those cards that got shortchanged like they were B-stock and used prolifically in Dells. The chipset would have been 550ti, but the ic's wouldn't support the full factory speeds, or bandwidth etc. Explains the 700/800 clocks. Quite often called a 'lite' or 'LE' version.

Karadjgne said:
The 24 ROP's say it's a 550ti as the 450 had 16. There were some of those cards that got shortchanged like they were B-stock and used prolifically in Dells. The chipset would have been 550ti, but the ic's wouldn't support the full factory speeds, or bandwidth etc. Explains the 700/800 clocks. Quite often called a 'lite' or 'LE' version.

Which also explains the vga port.
Click to expand...

Thanks for the info.
But as the BIOS showed "Geforce GTX 1050", it is still a false card right? I cannot have been taken out of a Dell machine I suppose.
0

The card was flashed to appear as a different card, which was possible for some of these older models. I don't think one can flash them back to the card they should be by using the typical software-based firmware update utility though... 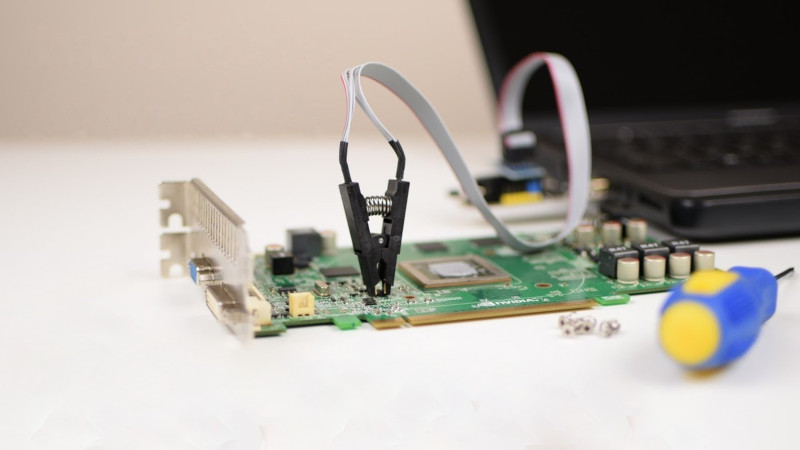 Fake Graphics Cards And How To Fix Them

When shopping online, there’s plenty of great deals out there on modern graphics hardware. Of course, if you’re like [Dawid] and bought a GTX1050 Ti for $48 from Wish, you probably susp…