Hi everyone, I have an old Lenovo Z470 that was running very hot 80 degrees Celsius or more. Apart from running hot and occasionally powering down when it got too hot, there was no hanging or other issues. I decided to clean the fan so I took off the heat sink and there was a lot of dust/dirt blocking the fan vent. I also noticed the 9 year old thermal paste on the CPU and GPU had dried and hardened.

I cleaned the dust and dirt from the fan vent, cleaned off the old thermal paste with 70% isopropyl alcohol and reapplied Arctic MX-4 before securely reseating the heat sink and screwing it in. I did not remove the CPU from the motherboard but I did apply quite a bit of force to remove the dried thermal paste from the PCB around the CPU(manufacturer had applied thermal paste to the extent that it overflowed over the chip and onto the surrounding chipboard. I also removed the DDR3 RAM to dust it off and reseated it properly.

The laptop started up fine at first and ran at a decent 50 degree Celsius at idle according to Speedfan but shortly after the laptop hung. Cursor wouldn't move and no response to ctrl-alt-del. I held the power button down and powered it off. I restarted it after doing a cold reset, taking out the battery and plug and holding down the power button for 15s, and it started up okay with the usual Windows crash screen with options to start normally or run diagnostics. I started up normally and it ran okay again for a little while and then hung again.

I restarted it and it would not boot up. Black screen, LED lights for volume etc light up and the fan runs at max speed. I have tried to remove the heatsink again and reapplied the thermal paste and put it all back together but the no boot, no beeps, max fan speed issue persists. I have tried switching the RAM modules with no luck. Is there anything else I can try? The OS is Windows 7 Pro.

I'm sorry for the wordy post but I wanted to be thorough. All help is appreciated.

Edit: attaching a photo of the laptop pre-cleanup. The arrow points to the excess thermal paste I really went to work on to get off. 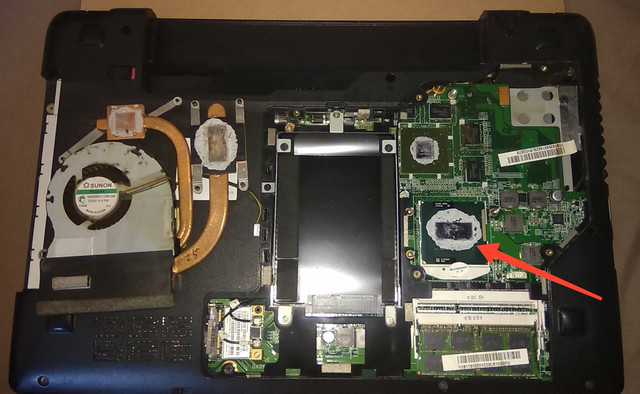 When you say 'no boot' ... I assume you mean you can't even get into the bios?

When you say 'no boot' ... I assume you mean you can't even get into the bios?

That CPU ... i5 2450M ? Assuming you're in the states, they can be had for $20 delivered to your door... no guarantee that's the problem of course but I imagine it's either that or the motherboard. It might be worth a $20 gamble.
Click to expand...

Sorry for the delayed reply. Indeed, no boot as in nothing appears on the monitor once I power on. No bios, no errors, no beeps. Just the fan going on high. I'm not in the states unfortunately and I've got the i7 2670QM. Not entirely sure I want to spend anything on this relic heh. I'm sort of more curious as to what's wrong with it or if I did something to mess it up. Thanks for your reply.