Question Fiber optic and slow. How should I reconfigure my setup?

I have a 1GB/s Fiber Optic internet connection but the internet is not as fast as I would hope. Due to a high amount of signal loss in my apartment, the connection from my Asus router does not reach the bedrooms. Also, each mesh router does not recognize the other unless they are placed practically next to each other. I have an ultra-fast Lenovo X1 Carbon from work, an Intel i7 desktop, and an iPhone 11 on which I have run speed tests so this rules out the devices as an issue. I also have physical cables connecting each room (as you can see in the diagram below). The reason for such a setup was for FAST and RELIABLE internet, which did not end up delivering the results as intended. I have been using this configuration for the past two years.

I would now like to UPGRADE with advice from you all. I don't mind spending more money but want to future proof and improve it dramatically because I do a lot of work video conferences from my home office and have experienced dropped calls. I am looking for Wifi 6 (ax) and prefer just one Wifi network instead of multiple, though I don't mind a router & mesh combo.

Here's a simplified depiction of my 1,500 square foot apartment: 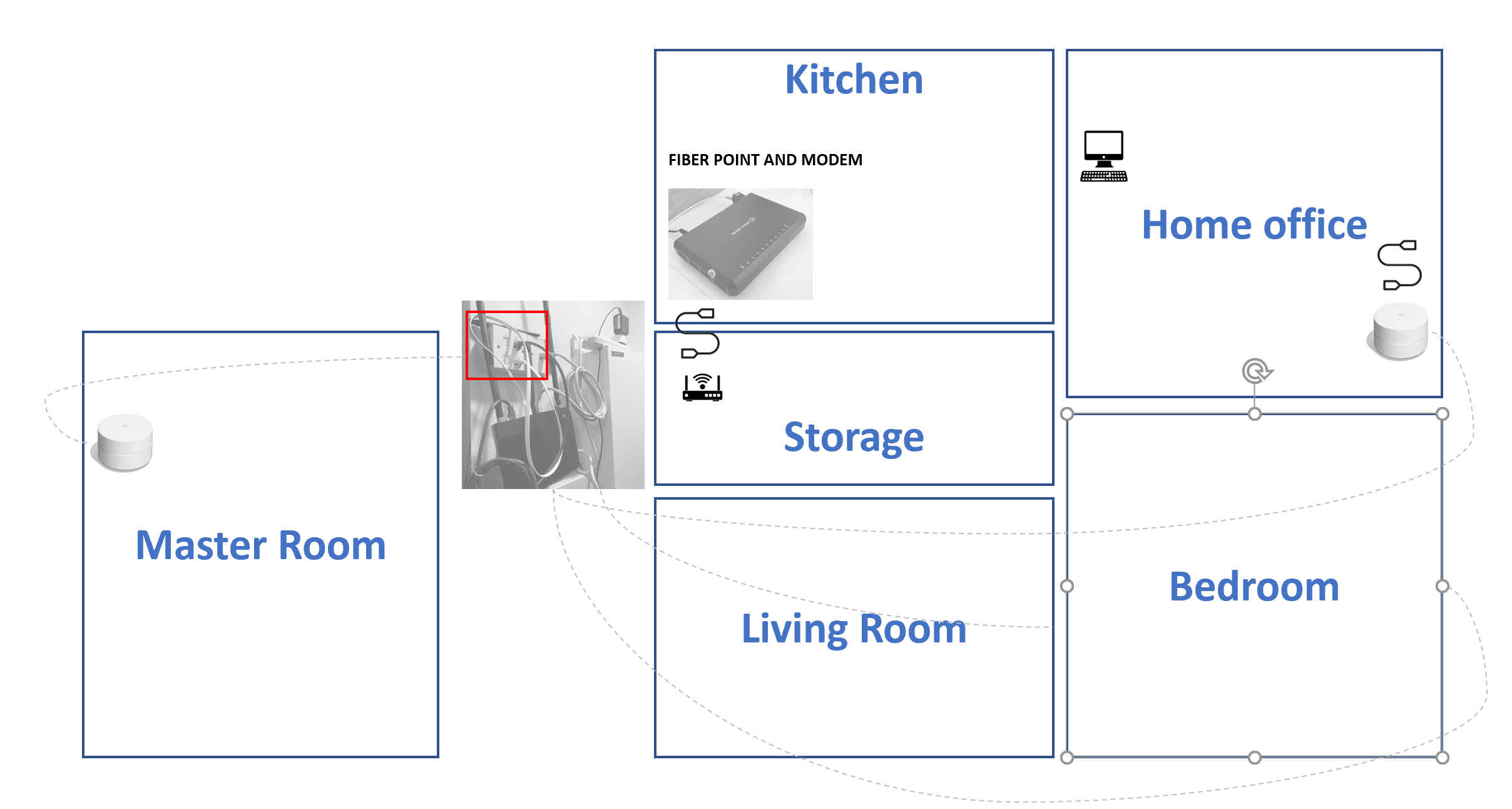 I have two specific questions:

1. ROUTER: Given what you know, would you get a router + mesh combo setup, just router or mesh setup? My hunch says that a single router will not work because of signal loss. Routers or devices I am considering are (with prices from Amazon):
2. NETWORK CARD: Would you get a PCIe card for the desktop like a TP-Link WiFi 6 AX3000 PCIe WiFi Card or EDUP WiFi 6 Card AX 3000Mbps PCIe Network Card AX200?

I have run speed tests so this rules out the devices as an issue
In all honesty that doesn't rule out if you have a bad router or bad drivers or a badly constructed crib whereby plumbing or hollow walls are playing fowl to your signal propagation.

You might want to see if your current router has any firmware updates pending. To add, it should not be in a storage room, rather I'd see if placing the router in the middle of the house(perhaps at a height of 6'/7' above the floor level, making sure you don't have any electrical or appliances in the line of sight of the router.
0
B

I would wait on the wifi 6 for a bit price will only come down and very few end devices support it. It has been strangely very quite on this technology which likely means it is not the magic solution they have been talking about.

First forget about "mesh" that is marketing buzz word for repeater. They needed something to con people into buying new equipment before wifi6 was out.

In your case you have no need for any form of repeater, they are a last choice in network design anyway.

So what you want to do is put some fairly average router in the closet. It does not need fancy wifi because it likely will get poor coverage. As long as it has gigabit lan and wan ports it can likely run your internet connection. Other software features like parental control etc only you can decide if it has value. You hook your remote rooms to the lan ports.

In the remote rooms you want to run as much as possible on ethernet. You can add a small switch if needed. For wifi converge you want to use AP in the remote rooms. You do not have to buy actual AP any router will work. Really the only advantage to something like AP is central management.

You might not need AP in every room but it is a option. You will get the strongest signals.

I would not go too overboard with the wifi. You should get good speed when the AP is in the same room even with mid grade stuff. Things that really need the performance you are going to have connected via ethernet anyway. Does your phone REALLY need to transfer data at 500mbps.

What you currently have likely just needs to be tuned a little bit. You want to turn off and ignore any mesh garbage. Just set the remote unit up as simple AP. You can run the same or different SSID it is personal preference. Even though the "mesh" guy claim it there is no concept of seamless roaming in wifi. The end device not the network decides what to connect to.
0

You identified the Ubiquiti AmpliFI as a possible choice, but you might also want to look at the Ubiquiti Dream Machine. It is the home version of the UniFI router/controller. You could then add Ubiquiti access points like the FlexHD in rooms with wired connectivity to improve your WIFI coverage.
You must log in or register to reply here.
Share:
Facebook Twitter Reddit Tumblr WhatsApp Email Link