I ran the dump file through the debugger and got the following information: https://jsfiddle.net/s3xjLhko/show This link is for anyone wanting to help. You do not have to view it. It is safe to "run the fiddle" as the page asks.


This information can be used by others to help you. Someone else will post with more information. Please wait for additional answers. Good luck.
0

rabithole1234 said:
..and another BSOD. KERNEL_SECURITY_CHECK_FAILURE. This time I was reinstalling a LAN driver. Luckily there was a dump this time. https://www.dropbox.com/s/dgb6gu4iflv4c2h/050222-15937-01.dmp?dl=0. It's the exact same type of BSOD I got yesterday after installing Armory Crate.
Click to expand...

I was coming in to say that crash looks like lan drivers caused it. All of you LAN drivers are from Intel so you could have tried the Intel driver updater.

rabithole1234 said:
But seriously. Two of my drives are suddenly dying? This seems really strange. Is it possible that there’s a short somewhere on my motherboard that’s destroying everything connected to it? Or maybe the SATA controller is buggy? Or I guess it could be a driver issue...but if that was the case SMART wouldn’t show me critical errors. I honestly have no idea what’s going on anymore.
Click to expand...

2 drives? I am not sure I would risk a third. I would get PC looked at by a repair store. It could be the 7 year old PSU that only has a 5 year warranty. I have seen hdd killed by PSU before, so perhaps. It would be my most likely candidate. It could be the motherboard given your below ambient temps, something isn't right there.
Last edited: May 2, 2022
0

Coming back here to say my motherboard pretty much died a few days later. Not even the standby RGB lights would come on when connected to a PSU. Even bought a new PSU (rm850x) to make sure it wasn’t my tx750 that died. I checked the board for any burn marks or oddities and I did notice that a capacitor near the CPU socket had leaked. I’m guessing that’s also what caused the random freezes during POST. 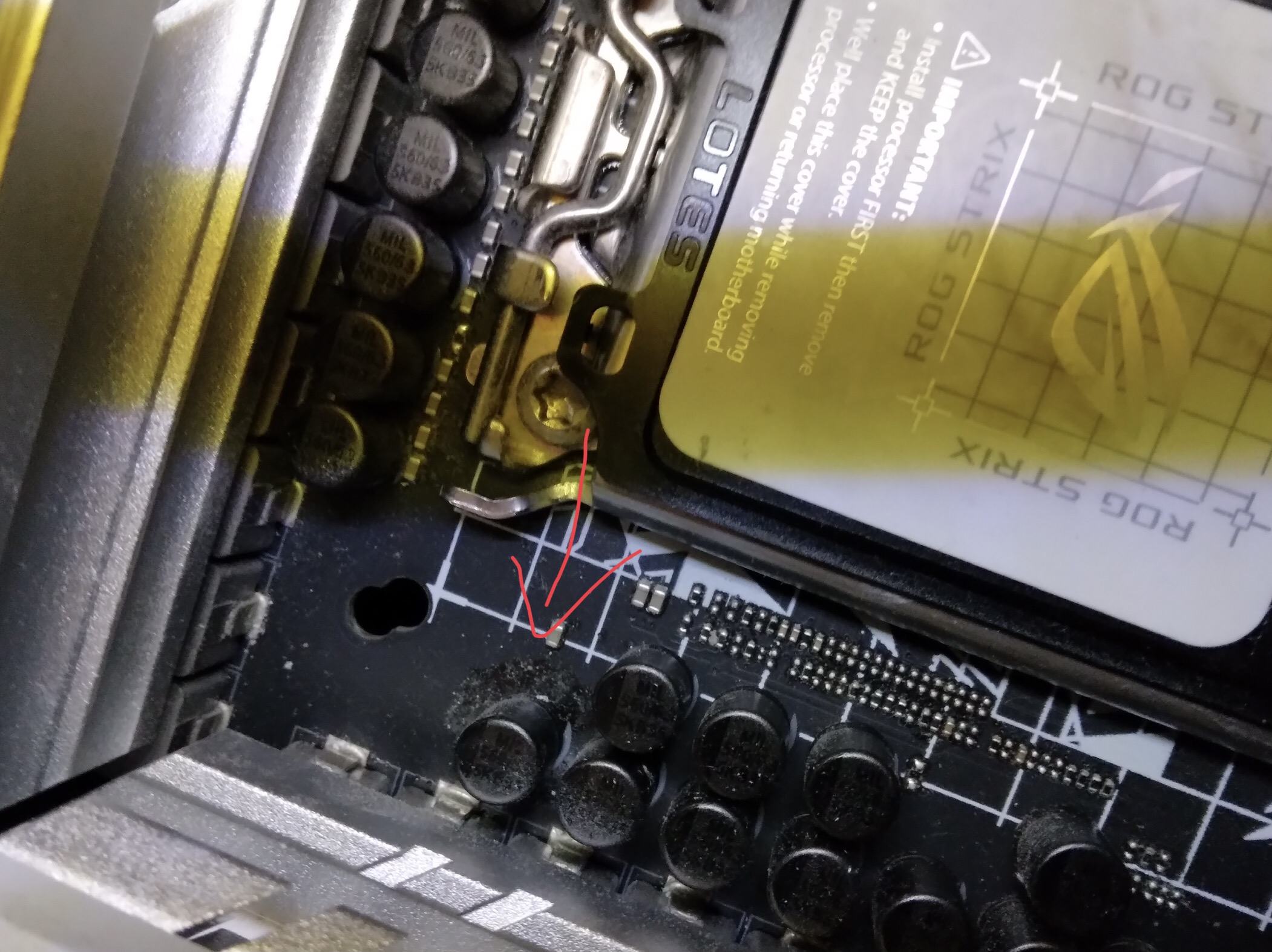 Anyway I’ve received a new board that is functioning properly (for now) and it seems that most of my issues are gone. CPU temps are still suspiciously low but I guess that’s just normal (or my CPU is about to die next).
0

it was the one thing in PC we have no tests for. The motherboard.

Wonder if it killed the other drives.

I am not aware of what temps are normal for that CPU. What are you getting?

I know those capacitors are for power management.

First, a capacitor conditions DC voltage to other components (e.g. the video card, hard drive, sound card etc) as a way to provide a steady stream of power.
Click to expand...

How Capacitors on Motherboards (and Other Components) Work

Wondering what capacitors are? Learn how they work and why they're such an integral part of the motherboard and other components!

www.alphr.com
I can't find anything that tells me exactly what that one does, but its a good thing to replace the MB (like you did).
Last edited: May 10, 2022
0

temperatures hard to tell, as they depend on ambient too, and what cooling you have. I have to assume its an air cooler.

I looked at the bugcheck. the timeout was so small most likely the error is due to a problem in one core talking to another cpu core.
the stack was corrupted so you have to look at the raw stack.
the raw stack shows that plug and play was trying to install some driver at the time of the bugcheck.
this is most likely the offending driver:
E:\SEGA\PHANTASYSTARONLINE2\pso2_bin\GameGuard\dump_wmimmc.sys Wed Jun 30 23:00:02 2021

to debug you have to change the memory dump type to kernel then provide the kernel memory dump
c:\windows\memory.dmp
(still likely to be a issue with the above driver)
0

@johnbl did you look at his last post, seems his mb was faulty and he has replaced it.
So hopefully the errors are gone too

Colif said:
@johnbl did you look at his last post, seems his mb was faulty and he has replaced it.
So hopefully the errors are gone too

did not see that this was a old thread.
0

Colif said:
temperatures hard to tell, as they depend on ambient too, and what cooling you have. I have to assume its an air cooler. 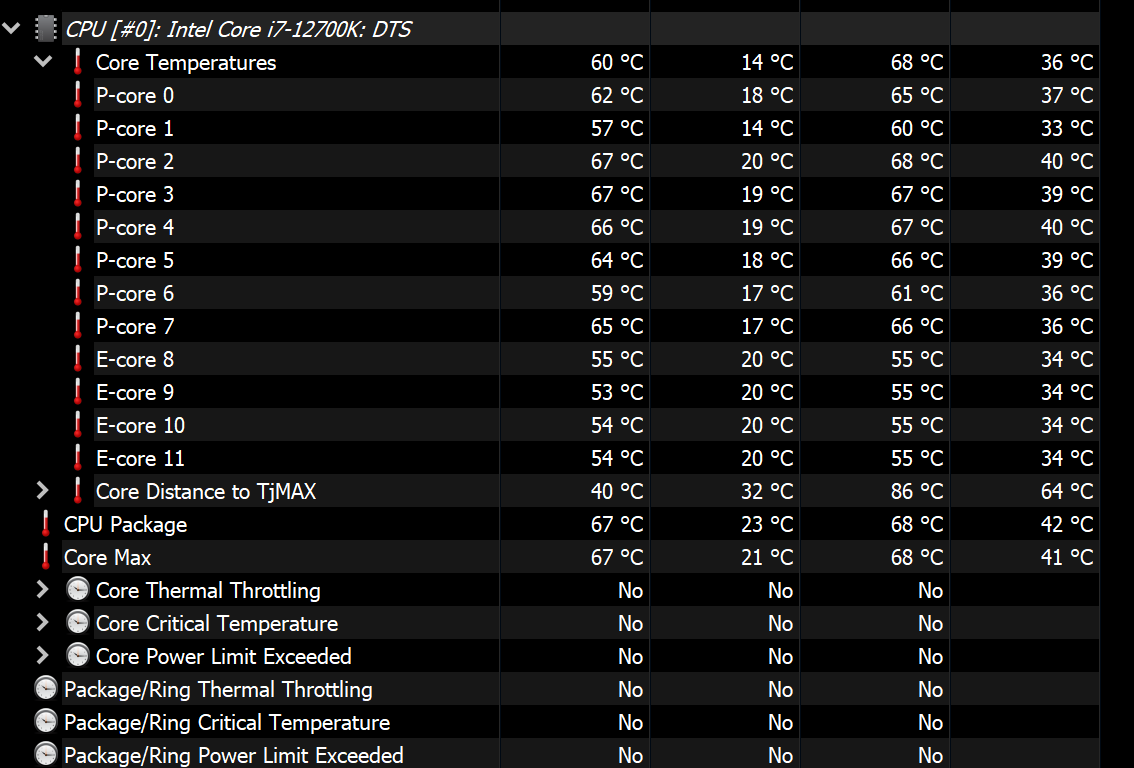 I swapped to an NH-D15s earlier this morning because the NH-D15 I was using wasn't actually "supported" on this motherboard (had to rotate it 90 degrees for it to fit). They're pretty much the same thing though. It's about 20c in this room right now so I guess the temperatures are ok? These were the temps while running prime95. I read that Intel's DTS has an accuracy of +/-5c, so...maybe I shouldn't worry about it.

I haven't run into any blue screens or POST freezes since replacing my motherboard, but I did get one driver crash. There was a quick black screen and the driver recovered almost instantly....which got me worried, so I was checking around hwinfo and noticed that the voltage drops pretty significantly on the pcie 12v. It has dropped as low as 11.565v, which is still within spec...but isn't that pretty low for a gold certified 850w PSU? I asked on the corsair forums and they've told me not to worry about it as it could be innacurate...but I guess i'll have to just wait and see if I get any more driver crashes. 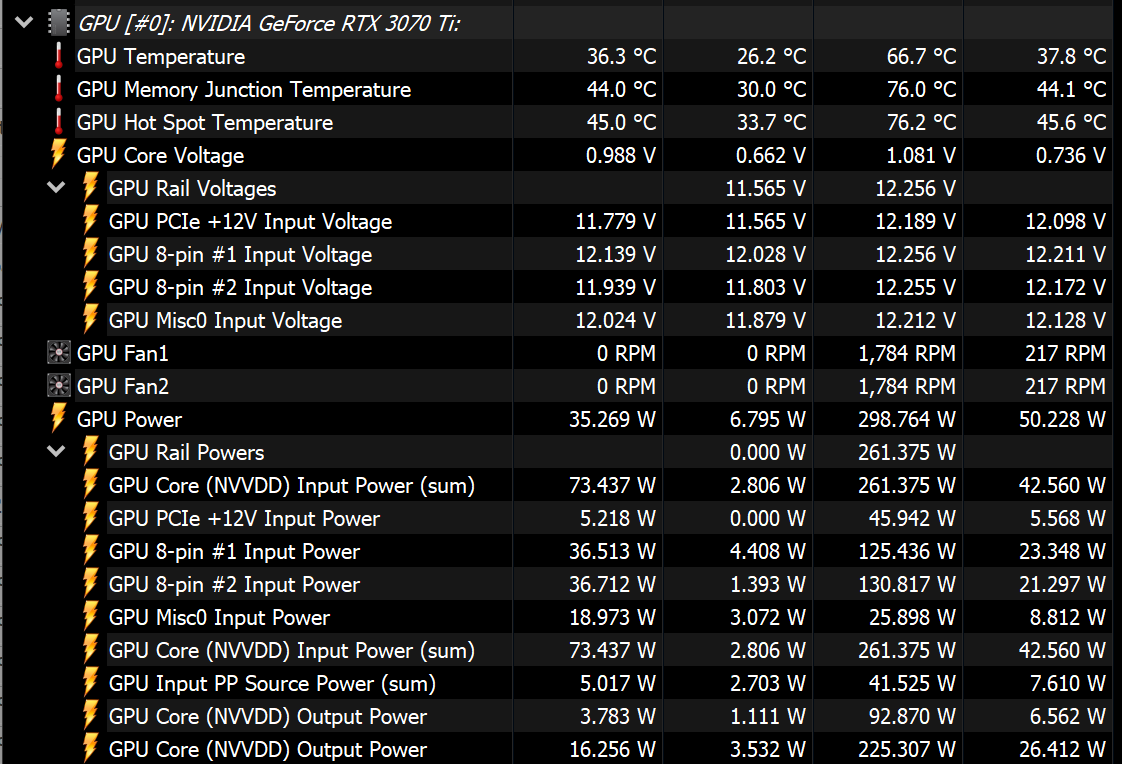 Also...the capacitor I took a picture of on the original board looks like it's leaking on the new board....There was a small bit of an oil looking substance under it. Not as much as the original board, and I'm not sure if it was there when I put it into my case. Maybe it's just glue? I guess I should keep an eye on it.
Last edited: May 19, 2022
0

hwinfo voltages can be inaccurate, its why i generally don't suggest using them if looking at PSU as problem. I used to.


rabithole1234 said:
Also...the capacitor I took a picture of on the original board looks like it's leaking on the new board....There was a small bit of an oil looking substance under it. Not as much as the original board, and I'm not sure if it was there when I actually put it into my case. Maybe it's just glue? I guess I should keep an eye on it.
Click to expand...

You could ask about it on Asus forums