I have been trying everything but can't find a solution so i will describe my experiences i had so far, hopefully someone gets an idea where the problem might be. HP Omen gaming laptop, specs below:

I re-installed windows 10, 64 bit via the recovery option about a week ago now, installed all the drivers but my laptop was slow and games performed around 10 fps on lowest settings where they normally perform with 60 fps. I double checked by manually installing drivers that mattered via the respective websites (Nvidia, intel chipset etc) but no progress. Then i also performed a bios update (to F.56) after the bios update, flashing bios etc. It was fast responsive and my games where back to 60 fps...

However after a couple of hours of leaving my pc unattended, it went back to being slow. Doing online research i found it could be an software problem during the clean install.


So 3 days ago i re-installed windows 10 again, this time with a usb stick with windows media, deleting all partitions. I let windows do all its updates -> reboot -> update etc... Then i installed nvidia drivers manually to be sure, plus i installed a driver tool to check everything was up to date... (bios was version F.56, newest version available upon checking)

Still my laptop was slow,
I opened up my laptop and did a complete cleanup of dust etc. But still my fps and overall performance was slow.

Just to try, i did a re-update of the bios to the same version, and after restart it was fast.....
Fast response times, 60FPS in the same games on the same settings etc.. the next day it still worked perfectly.
However now its been 3 days since i did the update and after starting up the pc this morning it was back to the same old slow laptop. with 10-15 fps ingame.

I have been doing alot of googling and trying solutions but can't find a anything that works so i hoped to find something with this thread.
I can now for sure say that the bios update makes a huge difference but that it turns slow after a relatively short period of time.

What version of Windows 10 are you on? We're currently on version 20H2. Also, you might want to see if the SSD is pending any firmware updates and if you're able to see any change when you reinstall all your relevant drivers. I'd use DDU to uninstall your GPU drivers and reinstall said GPU drivers manually, as an Administrator after sourcing the latest drivers from Nvidia's support site.
0
M

Lutfij said:
What version of Windows 10 are you on? We're currently on version 20H2. Also, you might want to see if the SSD is pending any firmware updates and if you're able to see any change when you reinstall all your relevant drivers. I'd use DDU to uninstall your GPU drivers and reinstall said GPU drivers manually, as an Administrator after sourcing the latest drivers from Nvidia's support site.
Click to expand...

Thanks for the reply.

-I double checked but I do have Windows Home 20H2.

-I installed DDU, uninstalled, and downloaded the driver from Nvidia website, ran it as admin, restarted pc but no change.

-I tried to find a firmware but can't find it. I installed samsung magician (the firmare update tool of samsung) but it doesn't tell me there is a pending update. This could be though because it is not a consumer end SSD card. HP support website only has seagate and toshiba for my laptop model no. Sended samsung bussines a question if this is possible.

So im a little step closer.
I found out that my CPU gets downclocked without any temp problems. Im hoping someone has an idea where this is coming from.
My pc is dust clean i cleaned it less then a week ago, and temps dont seem to be getting higher then 80-85 max
just as a reminder, i have had the pc running smooth. unfortunatelly i didnt check the clock speeds at that time but im assuming they where normal.
See "Max" Clock speeds in the image below from HWMonitor

So could it be power ? I don't have any options in my BIOSthat i can change unfortunatelly. But i can post pictures of the options i have.


Screenshot taken after running around in a game on ultra settings for 2-3 minutes. 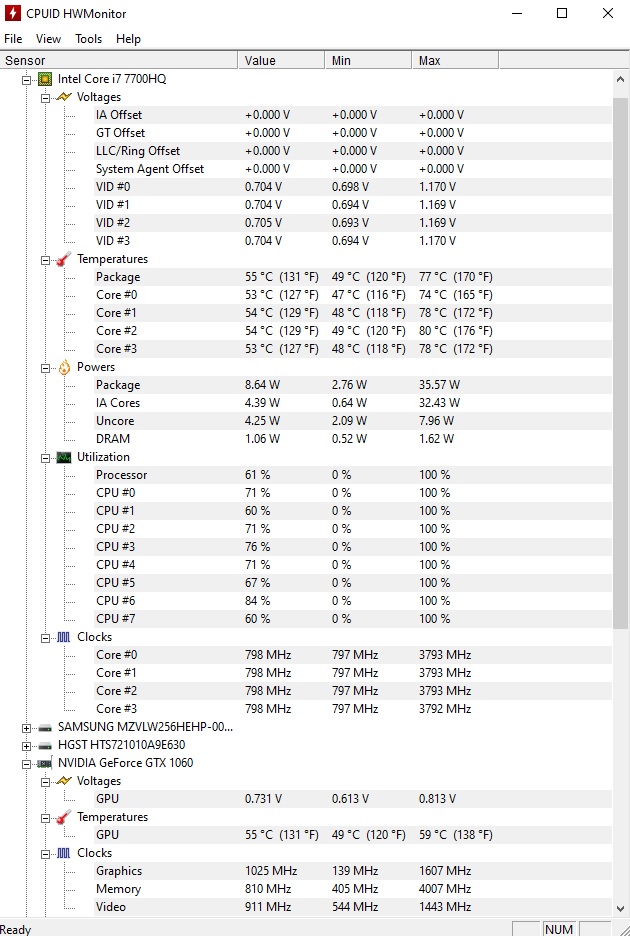