So I've stumbled upon an issue that I can not seem to understand or work my way around.

As you may notice there is a graphics card missing. Well, I think I did what a lot of people did, I built a computer for the 3080 and right now I'm in the waiting room. So I decided to throw in my old 1080ti for the meantime.

However today I ran into two issues.

My first one was that I tried connecting my Blue Yeti microphone, which is fully plug-and-play, but Windows would not install it. Instead it sits under Other devices in Device manager with a yellow exclamation mark. Tried different USB-ports. Tried uninstalling/reinstalling drivers. Disabling, re-enabling. Rebooting. Etc. No luck. Windows just comes up blank when I search for drivers.

My next problem was that I realized that I could not select either of my DisplayPort-monitors for audio. After a bit of sleuthing around I realized that something was missing, Nvidia High Definition Audio is nowhere to be seen under Sound, Video and Game controllers. Instead I have another yellow exclamation mark under Other devices - PCI Device. The only PCI device in my computer is the 1080ti.

Same story, I try reinstalling the GeForce drivers. They reinstall fine but there isn't even an option to install any audio drivers, only graphics and PhysX. I try older drivers, no difference.

I think maybe the PCI-E power cables are not fully in, they are. I become afraid that I've somehow damaged the card when I took it out of my old rig and put it into the new one so I remove it and put it back in the old computer. Works perfectly fine, audio and all. Same goes for the Blue Yeti, no problems in the old computer.

I then thought that perhaps I've gotten really unlucky and that there is something wrong with the PCI-E slot in the new motherboard, so I swapped the card to the other slot, same story.

A slightly interesting part is that when I enter the NVidia control panel under Digital Audio, it finds the monitors perfectly fine.

However when I go to the Windows Sound settings, they are not there. 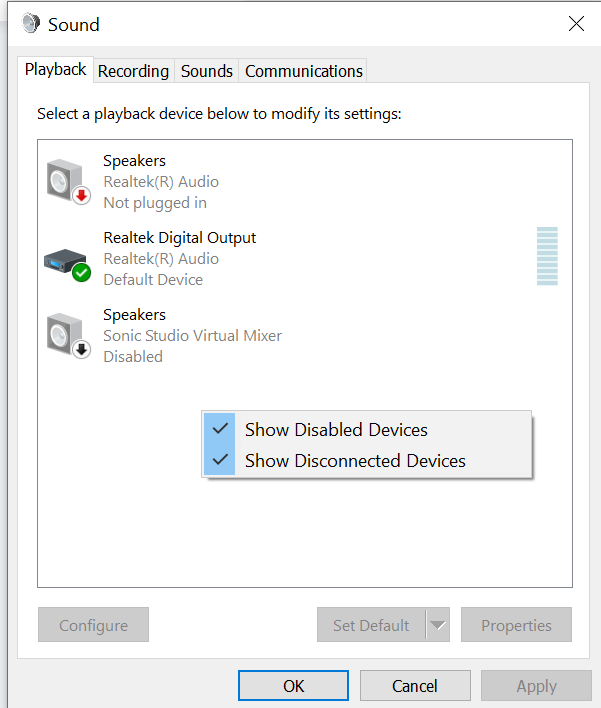 I am sort of at a loss. These things are not "game breaking" but considering it's brand new hardware I'm not going to just leave it be. Any and all help greatly appreciated!
0

After some headache I decided to do a clean format and reinstall Windows. Everything worked straight away. Not sure what exactly happened but my issues are solved.