Coming in at around $72, the Gigabyte B450M DS3h v2 is Amazon's Choice for "B450 Motherboard." Is this board worthy of this title?

I have owned 2 Gigabyte B450M DS3H motherboards and have had time to get familiar with them. Note, I have own only the V1 version, not the V2. Below are my experiences with the board and my thoughts.

For the looks, this board looks... fine. It is certainly not exciting, but it isn't bad by any means. It has some amber leds on the bottom left of the motherboard, much like some Asus Prime boards. 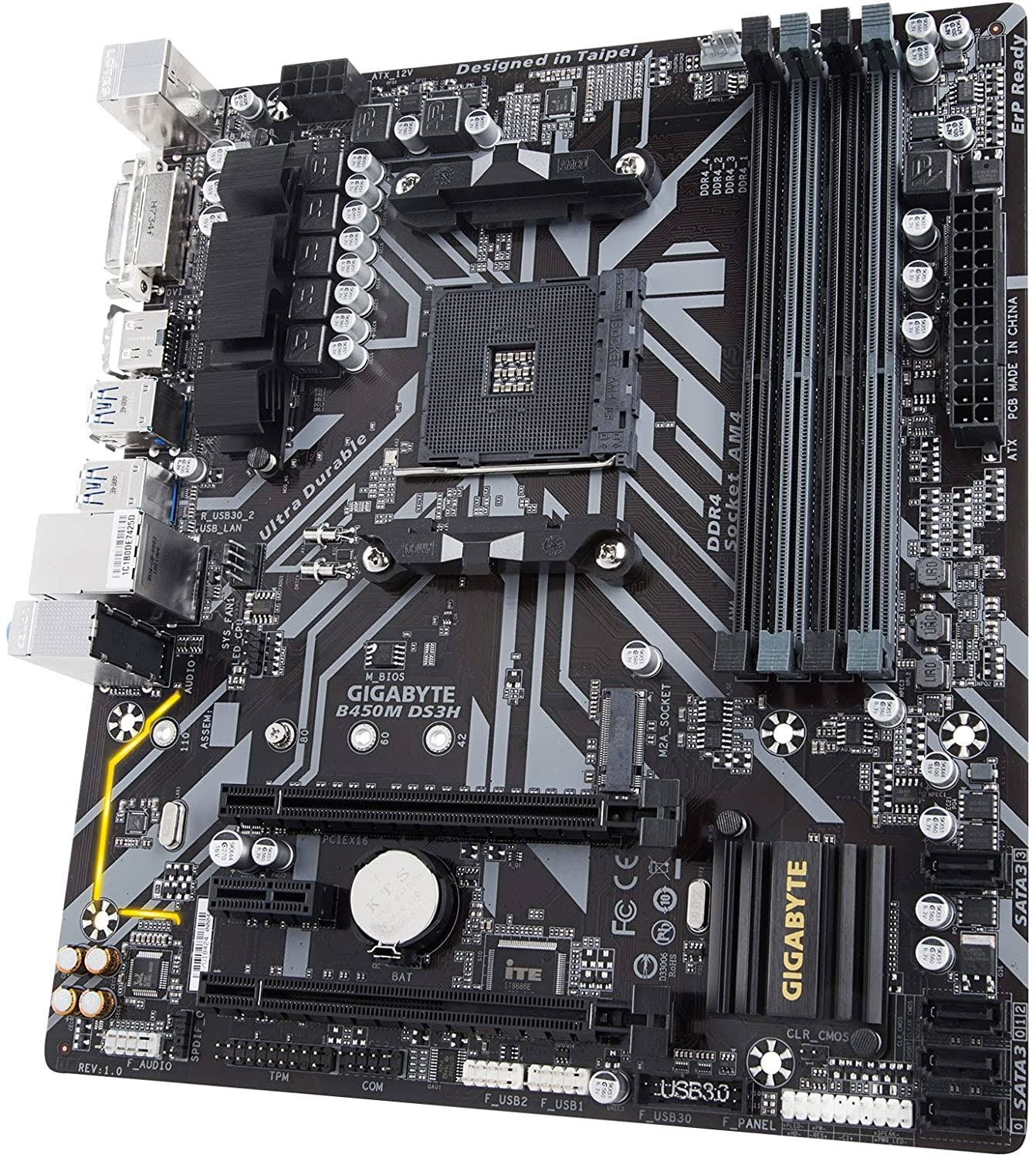 
Additionally, this board features 4 ram slots, a feature which is uncommon on boards this cheap. This board also has a VRM heatsink, which some boards of a similar cost do not have. This board has a single M.2 slot and just enough other connectors. I was surprised to see a second X16 slot, however it is actually only X4 electrically, as most of the slot is not actually connected to the motherboard.

Overclocking:
I have overclocked multi Ryzen 5 2600s before, so I knew that the CPU was most likely to max out at 4.1ghz or 4.2ghz, and require between 1.35 and 1.4 volts to achieve this. However, things did not go quite as well as I had hoped.

Going into the bios, under "advanced voltage settings" I was able to change the Vcore. Unfortunately, this motherboard was limited to only having an offset adjustment, and it was not possible to set a static voltage. I prefer fixed voltage so it is not a guess what the end voltage will be. Sadly, the offset would not let me enter any value above +0.2v, otherwise it would revert to "auto". In Windows, this ends up being about 1.35v according to CPUz, which is disappointing because 1.35v is not a lot for the board to already be maxed out. I have seen many sources state up to 1.4v is safe, and a limit at 1.35v did hurt how far this CPU could clock. However, this voltage limit was probably a good thing, as I will get into with the VRM testing section of this article. At this voltage, my particular Ryzen 5 2600 was able to achieve 4.1ghz, which is respectable.

In order to test the vrm temp, I loaded the CPU with aida 64 and monitored VRM mosfet temperature in hwinfo.

After about 25 minutes of the CPU being stressed, the VRM mosfet temperature was at 92 degrees celcius.

Although this is not dangerously hot by any means, and I experienced no VRM throttling at all, this is not as good as competing boards, and way hotter than something like a MSI B450 tomahawk would get. According to HWINFO the CPU was only drawing about 100w, which I wouldn't think would stress a VRM like this. Additionally, this is with great case airflow, a mesh front and 4 fans. With less airflow I would imagine the VRM would boarder on "too hot."

The good:
Price. Most boards around this price offer less features overall
4 ram slots. Many boards at this price do not have this
Worked well with 3200mhz ram.

The less good:
VRM is not suitable for running a high end processor, and runs much hotter than more expensive boards.
Limited voltage control in BIOS.
BIOS is arranged poorly.

The Gigabyte B450M DS3H is not exceptional in any one category, but offers decent features and is a decent choice for budget builds. Although this board is capable of overclocking, I would suggest looking elsewhere for serious overclocking. Additionally, I would suggest increasing your budget and getting a better motherboard if you are planning on running a high end Ryzen 7 or Ryzen 9 CPU. For those in search of a inexpensive value board that is good enough for the majority of systems, the Gigabyte B450M DS3h is a very good option.
0
D

I'd wager an 'Amazon's Choice' citation is purchased, with no evaluation against any relevant and objective criteria to make it merit based. Either that or the criteria is something like quantity sold in the preceeding time period.
Last edited: Feb 19, 2021
0