hey guys, not sure whats going on here, I've had this issue for a while but recently tried to rectify it by installing MSI afterburner and setting a custom fan curve to stop this random revving to 3400 RPM on my GPU fans whenever the temps reach 70c.

turns out the GPU is completely ignoring the settings and doing the revving still, MSI Afterburner shows the fan speeds match what I set at the time the revving happens yet these speeds only turn up around 2100 RPM not the 3400 RPM I am getting which makes me wonder why the GPU is ignoring what I set and how I can fix this because its really annoying having to play when the PC is doing this.

this is what happens when it starts, just random peaks of 3400 RPM during anytime the temp his around 70c 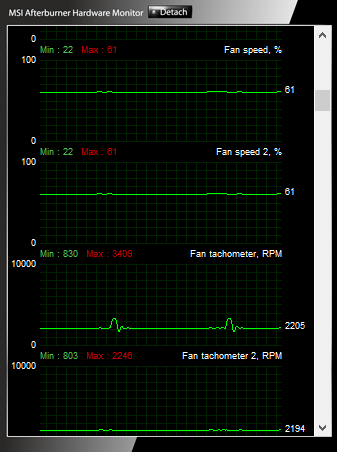 But sometimes it gets a bit carried away and does it consistently, as you can see it doesnt match the fan curve or what MSI Afterburner is reporting for fan speed, it also appears to be only on GPU fan 1 and fan 2 seems to follow the fan curve. Computer is not overclocked btw.

now I am a total noob at this, I hope my GPU is not faulty or anything, I need to know what is going on and what can be done to fix it, any help will do.