Hello, I've been trying to troubleshoot this problem for a couple days now, and after downloading an overclocking tool, feel like I've (hopefully) finally got my eyes on the core issue.

So, first, some background: The laptop has been running perfectly since I initially bought it, aside from an issue with one of the fans being unbalanced. I sent it in for warantee repair last month, and when it came back, they told me they'd replaced both the fan and the motherboard. I mention this because the motherboard change feels relevant to the current issue.

Yesterday was the first time I'd tried to run a 3D game since the repair. Within 10 seconds of loading into the game from the main menu, I was experiencing severely low framerate issues and after a few minutes the computer powered off entirely with no warning. Trying again, I went back into the game, lowered some settings, and this time the framerate issues were very slightly less severe, and I was able to last significantly longer before the sudden shutdown.

Since then, I've tried multiple different 3D games (none of them especially intensive, all things I have easily run before on older and much worse computers, or on this same computer before the repair), and they all experience the same issue, though I've been quitting out before letting it get bad enough to cause the immediate power-off. I've tested every possible settings in the windows 10 battery/power options - none of them made a difference. I've tried different settings in nvidia control panel - Adaptive power setting reduces the severity of the problem slightly, but it still happens.

I'd send it back in for warantee support again, but I need this computer for professional reasons as well and would rather not lose access to it for another 2 weeks if I can find a way to fix this myself.


So, on to the thing I've tried that actually did make a difference: Unplugging the computer and playing games on battery power. I don't know why, but whatever went wrong with the computer's power management of the GPU, it only ruined the plugged-in version.

Being that this is an ASUS computer, I installed ASUS GPU Tweak II to see if I could detect or deal with the problem somehow, and what I found was.......... interesting and very confusing. So, now I am here, to see if y'all with more expertise can make heads or tails of what is going on: 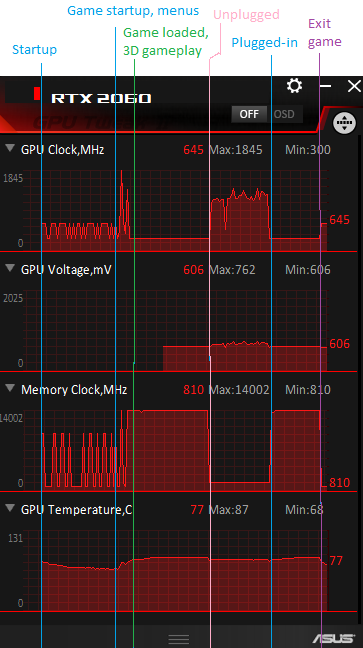 (and here's a version without the lines drawn on)

So, I feel like those labels I added are pretty self-explanatory, but.... yeah, the GPU flatlines at 300MHz and the Memory clock goes crazy, but ONLY when plugged into the AC power adapter and while running 3D graphics. It runs around 85-87 degrees F this whole time. I've no reason to think this is reporting inaccurately because each change matches what I experience in framerate and gameplay.

I also had Task Manager running during this process, for whatever it's worth: During the 300Mhz sections, it told me the GPU usage was 100% (while the framerate cratered); during the unplugged section the GPU usage hovered around 80% (while gameplay was smooth and normal).

I've checked the BIOS for any settings that might be relevant to the PCI-e port or other GPU power regulation; there were none, as far as I could tell. And again, changing the Power Options in win10 has done nothing to make a difference. Whatever is controlling this to keep it at 300 MHz, I don't know how to access the settings for it, if they're accessible at all. I've also tried uninstalling the device driver with DDU and letting it reinstall, but this didn't work either.

I've done a lot of troubleshooting of annoying and bizarre laptop gaming issues in the past, but I'm not that knowledgable - I've never overclocked anything, I'm not an electrical engineer, I've never had to install a bios (despite coming close a few times), and I'd never even heard of a "vbios" before trying to look up solutions for this issue and am still not totally sure what it is. So I come to a forum of experts.

If anyone knows what on earth could be going on here, or what I should try that might work, I'd be very grateful.
Last edited: Feb 8, 2020
Reactions: Saynt123
0
M

Bit of an update, tried more tweaking around with various things, uninstalling and reinstalling utilities, made a bit of..... progress?

Here's the latest graph from having just run a game: 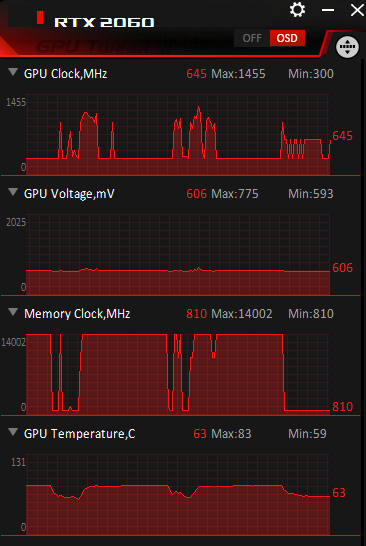 The bit towards the end where the gpu clock starts fluctuating between 645 and 300 you can ignore, that's after I quit out of the game. Everything prior to that was gameplay, with no changes in plugged/unplugged status or anything else.

What stands out to me here is that it wasn't totally flat-lined at 300Mhz this time, and the areas of best performance from the core clock coincide with the moments of low heat (65-80ish rather than 83, which it seemed to be capping itself at even though my TweakII settings cap it at 87). These are also the moments when there is a slight bump up in voltage and a complete dip down to 810 in the memory clock.

My problem is, I don't know what this means. Nor do I know how to fix it.

The most obvious explanation feels like something is forcing the GPU clock down to minimum when it detects a heat over 80, but if that's the hard throttle temp, why's it getting so hot so quickly running games that aren't very intensive at all? And why does it not throttle at that same temp while on battery power? And why is the idle temperature when not gaming at 63?

Trying the same game and conditions again on battery power, the core clock speed was consistently around 1270-1300, the memory clock stayed low, the temperature also ran around 83 without any significant drawback, and (perhaps importantly?) the voltage was slightly higher than it ever reached while plugged in.

Also, I've checked under the hood, and while I can't easily get at wherever the gpu is to look at it, the fans aren't too dusty and the airflow seems at least okay.

tldr; If the computer is forcing minimum clock above 80temp, it's only doing it while plugged in. The graphics card seems to be drawing more power while on battery power alone, which makes me wonder if something is wrong with the ac adapter (which is still relatively new and has always worked without issue), the charging port (which possibly was replaced along with the motherboard) or the wall power (I just moved into a new apartment). If it's a heat issue, I'm not sure what could be causing it, as prior to the fan repair the GPU never throttled that heavily even with an unbalanced fan.

Or, perhaps, the voltage and the temperature are related, and the heat is increasing because the power supplied from wall/adapter/charge port is insufficient somehow. I'm unfortunately not sure how to test this with what I have. May look around for computer repair shops tomorrow, see if anyone can offer me a free diagnostic with their electrical measuring tools.
Last edited: Feb 8, 2020
Reactions: Saynt123
0

I have the exact same issue. Did you find any fix ? In my case its even weirder. Like my GPU for sure works, because even though it becomes 300Mhz after a while, its not like the games do not work at all or something. I tried DDU and then re installing the drivers, but that too had no avail. Please update as to what is your condition now, it would be a huge help.