In June of last year, after 7 years of great service, I sold my R9 290 and acquired a used GTX 1060. Since then, the system has been experiencing issues.

In all applications and games, as well as File Explorer, the following symptoms occur:

​
• Monitor temporarily goes black for up to 5 seconds. When the black screen exceeds 5 seconds, it's usually followed by an automatic reboot, or an automatic reboot plus BSoD.​
• Games crash at seemingly arbitrary moments, and in some cases it's followed by a message which states: "The video card has been physically removed from the system".​
• Black rectangular-shaped boxes of varying sizes appear in all applications, including File Explorer after performing the following actions:​
clicking; typing; switching tabs; switching, minimising and maximising windows​
​
The size of these black boxes vary from being tiny to taking up an entire window. (Resizing the window fixes the issue for a few minutes.) Oddly enough, the FPS-performance is stable and the GPU's temperatures seem fine. (≈36 °C or ≈97 °F idle, ≈65 °C or ≈149 °F under load.)


- Different HDMI and DisplayPort cables and ports.​
- Different driver versions. (Clean installation on each occasion.)​
- DDU.​
- Different Nvidia Control Panel settings.​
- Various refresh rates 60Hz, 75Hz, 144Hz.​
- Clear the CMOS .​
- Reseat the GPU in each slot. (With screws, without screws, with screws loose, tight, somewhere in between, etc...)​
- Remove dust and apply new thermal paste (Even though temperatures seemed fine.)​
- Malware/Virus scan.​
- Browse the internet, looking for a solution...​
Whereas the DP cable seems to fit just fine into the monitor's port, from the get-go there has been an unsatisfactory degree of ''sagging'' on the GPU's end. The cable doesn't seem to latch on properly—even with the graphics card removed from the system.

Using an HDMI cable instead, combined with specific Nvidia Control Panel settings, seemed to resolve the issue for a few months, but recently all the above-mentioned symptoms returned at a greater frequency, regardless of the type of connector that is used.

The main reason as to why I don't think the PSU is the culprit is that the symptoms started to occur immediately after the addition of the GTX 1060.

So, based on my limited knowledge, everything seems to point at the GPU. (Or could it still be something else?)

Any ideas on the cause and/or tips on how to diagnose, fix, or bypass this issue would be greatly appreciated. 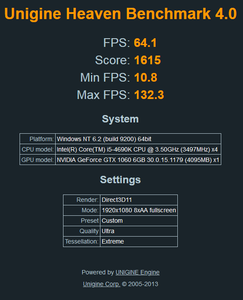 Seasonic M12II Evo Bronze 620W
How old is the PSU in the build? Try turning off all power saving features in BIOS and see if the issue persists.

If you look through this chart;
http://www.realhardtechx.com/index_archivos/Page362.htm
the power requirement for the entire system with an R9 290 is higher than the one with a GTX1060 in the system. I'd ask you to source a donor PSU, one that's reliably built and isn't about a decade old from a friend or neighbor and has 550W of power for the entire system's disposal, to rule out your PSU being the issue.

What version(not edition) of Windows 10 are you on?
0
R

Thanks for helping out. Here's an update:

Regarding the PSU, I am guessing 7 years leans toward the older side, but I cannot understand how the black screens occurred immediately after replacing the R9 290 with the GTX 1060. What are the odds a PSU shows signs of regression the second a more PSU-friendly GPU is installed? Furthermore, is there a possible explanation as to why the GPU never worked properly with a DP cable, but did work periodically with an HDMI cable (until it didn't)?

As for the donor PSU, I've made a few calls and could only get my hands on an old, 450W model. However, come the weekend, I could drive over to a friend's house and test the GTX 1060 in his system. (Will post update.)

Until then, any other ideas?
0
R

Was able to try out the GTX 1060 in a friend's system. Same story, but on his monitor we also noticed tiny dot-shaped pink artefacts. Even though those pink artefacts do not appear on my system, it looks like the card is toast. As a last resort I down clocked the GPU, but that also didn't resolve the issue.

• Monitor temporarily goes black for up to 5 seconds. When the black screen exceeds 5 seconds, it's usually followed by an automatic reboot, or an automatic reboot plus BSoD.
• Games crash at seemingly arbitrary moments, and in some cases it's followed by a message which states: "The video card has been physically removed from the system".
• Black rectangular-shaped boxes of varying sizes appear in all applications, including File Explorer after performing the following actions:
clicking; typing; switching tabs; switching, minimising and maximising windows
Click to expand...