Question Help pls... running out of ideas... system no longer posts after playing around...

after building a new pc I took my "old" pc with me home for Christmas to play around with ... its build in an ultra old case that I am basically using for a decade (always kept the "old" pc and upgraded the "old old one") and wanted to put it in a better case with older hard ware in it (has USB 3.0 and better cable management / layout...)

After moving the components and basically combining all (good) drives from the old and old old one (120GB EVO840, 250GB EVO850, WD 2TB Red, WD4TB Red, Seagate 6TB) I had trouble booting (expected with two OS drives) and while trying to get it to work (even inserted a Windows 7 DVD I stumbled on early) it one time stopped rebooting / posting... pics to show the time line: 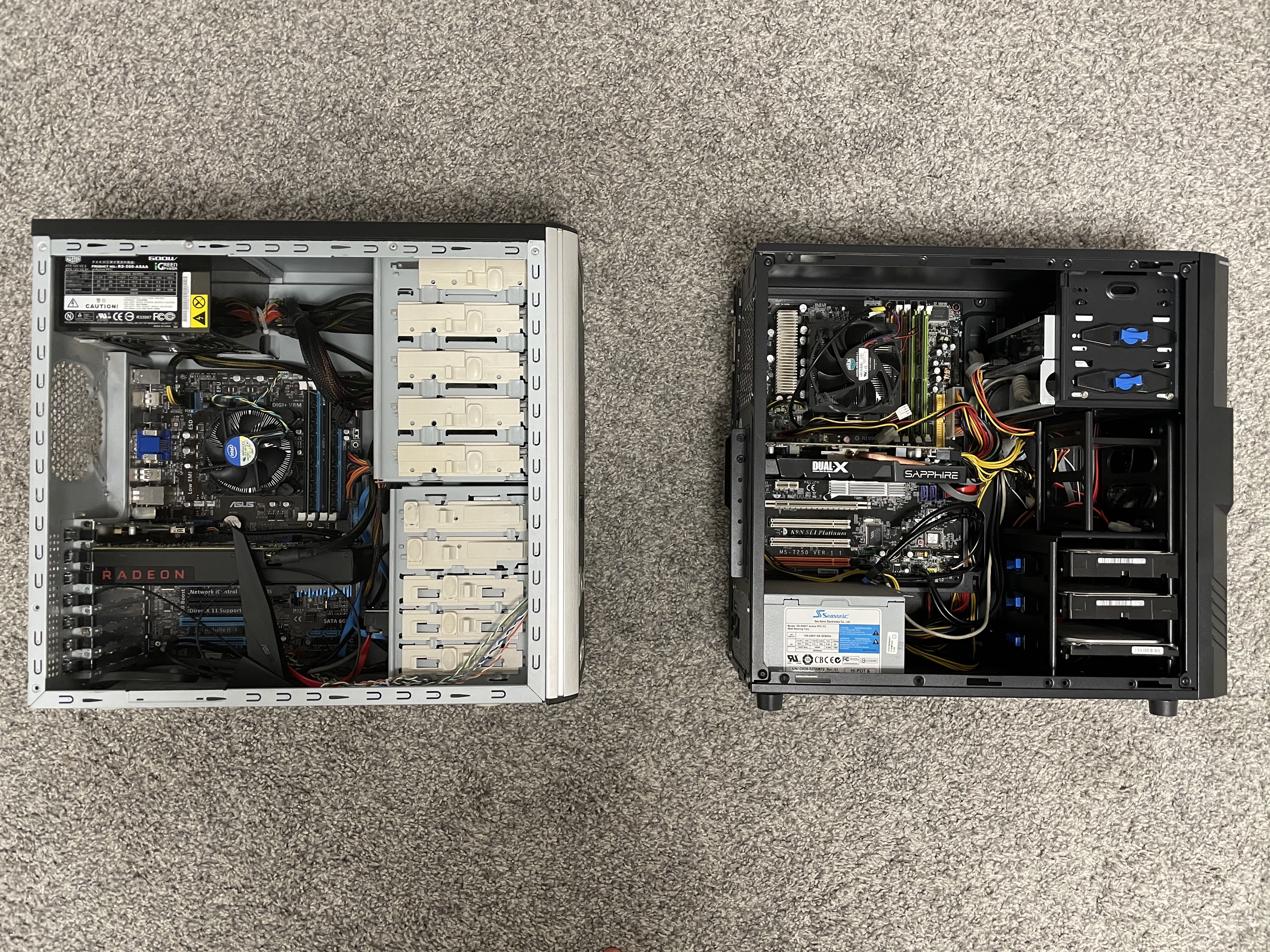 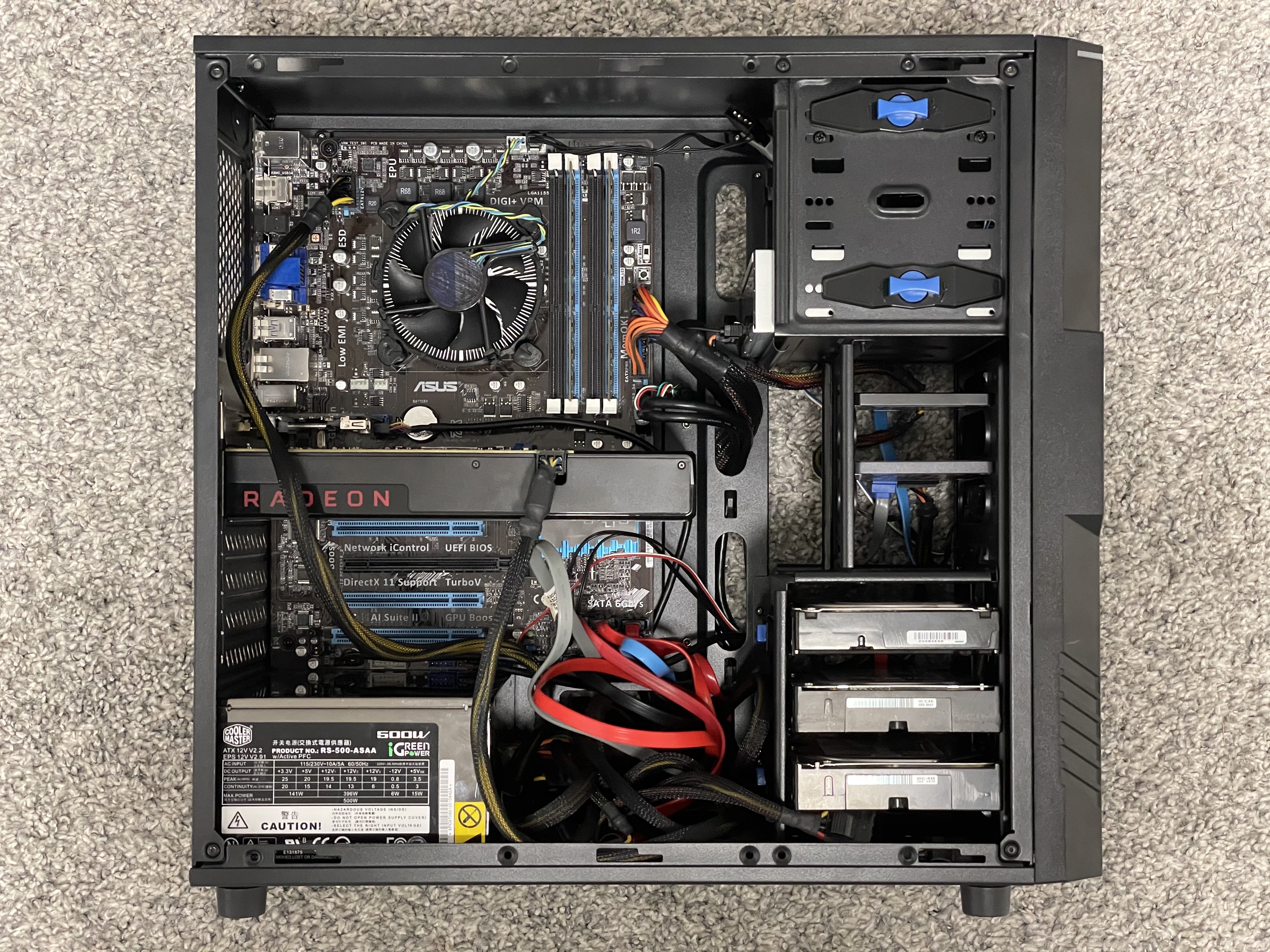 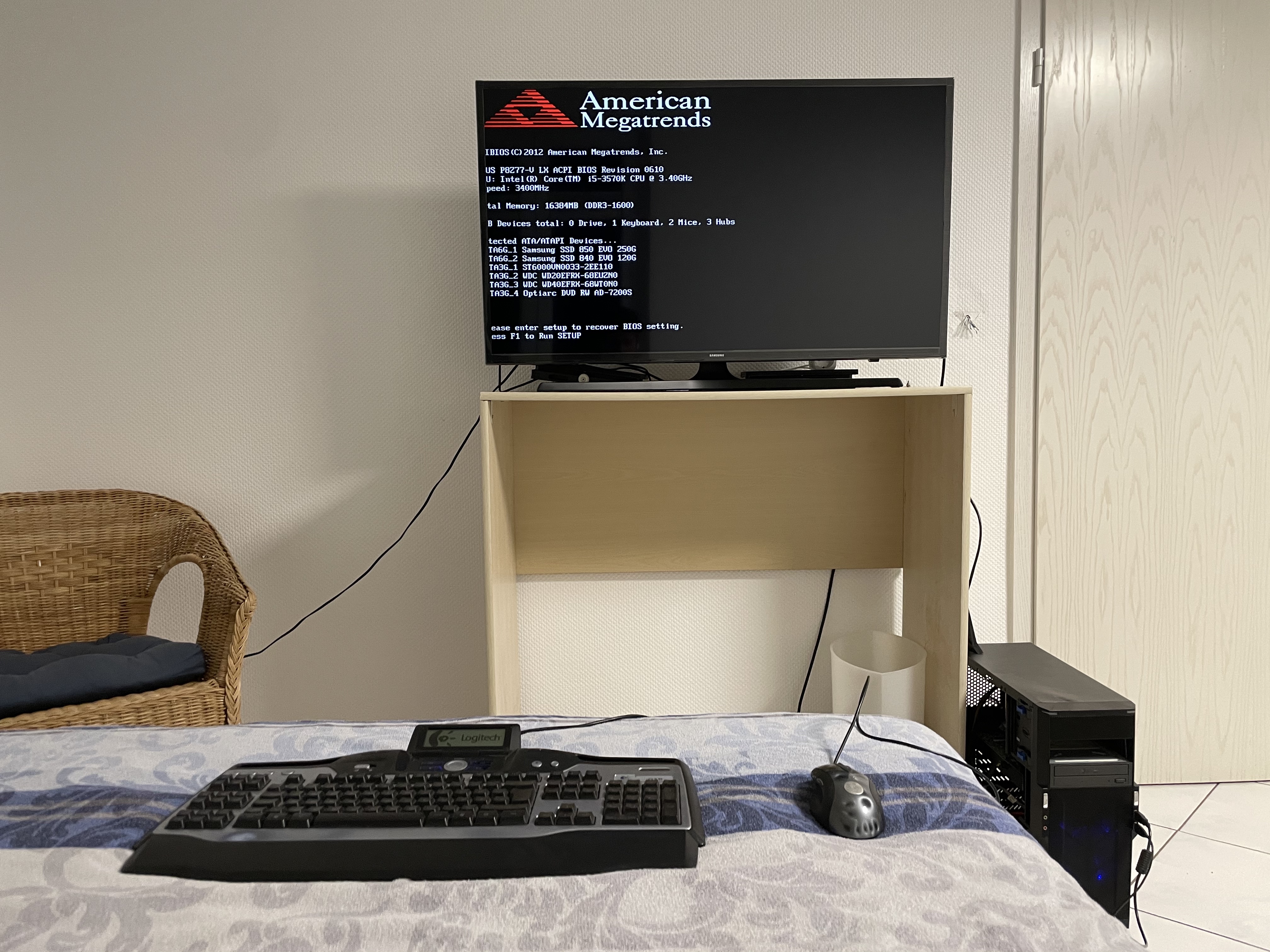 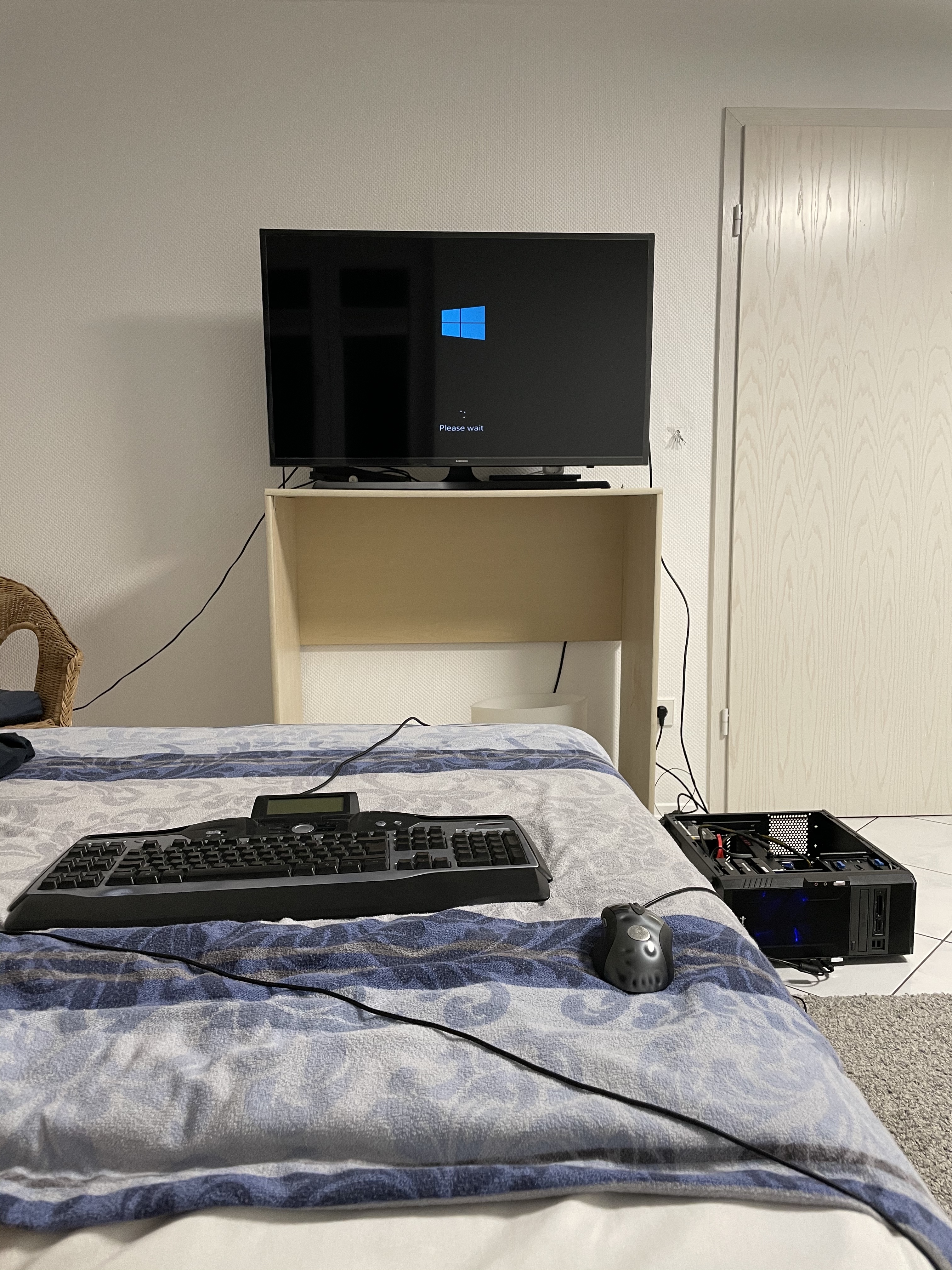 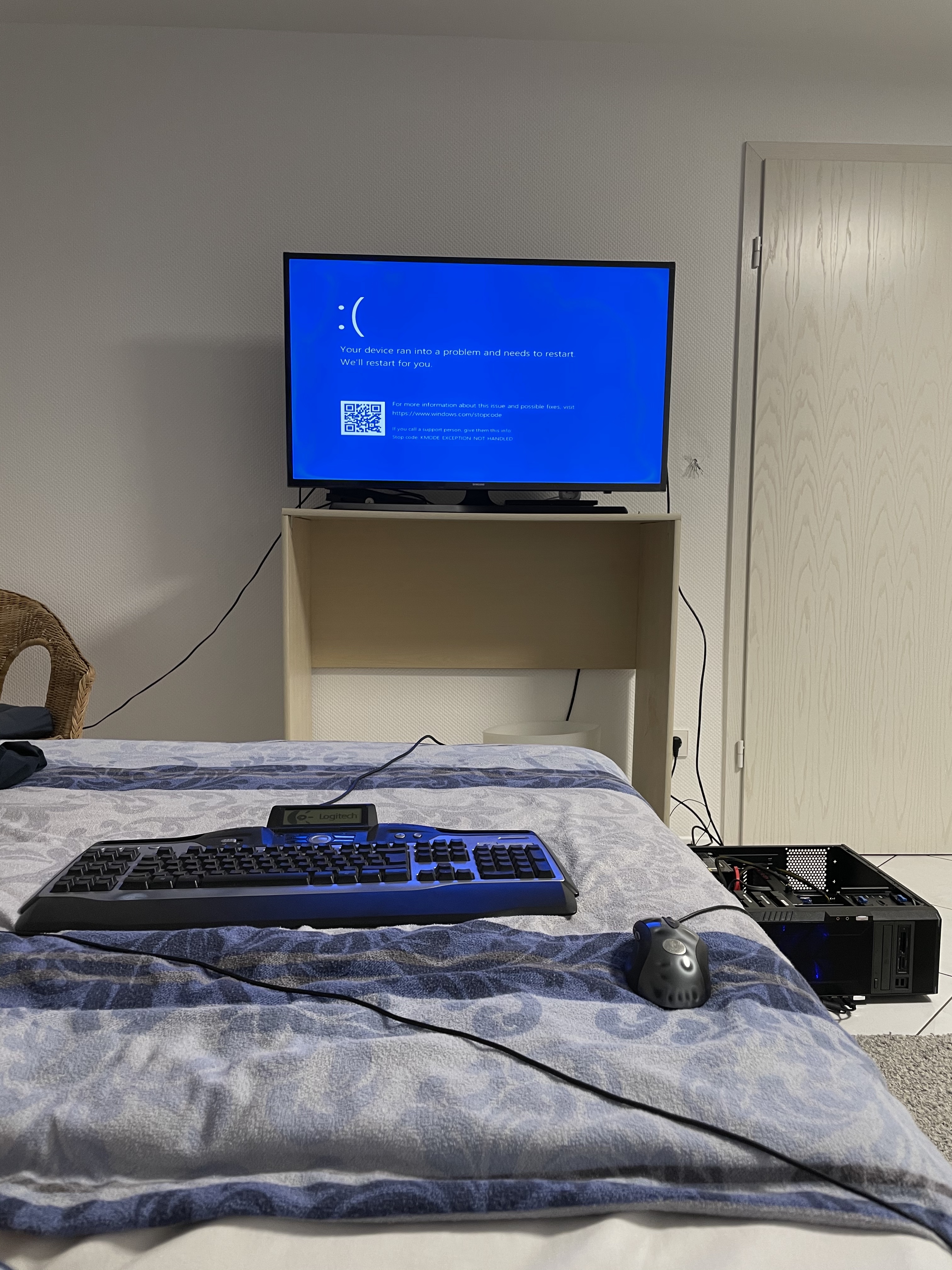 Not sure it was connected but I think when I tried to reboot from my DVD drive and the Windows 7 DVD I wasn't able to and I think that was when I no longer got it to post... but can't remember (though it was yesterday )

I removed everything (GPU, USB plugs, hard drives (sata) from the mainboard (and cut power). Only PSU and power / reset buttons and the HDD LED are connected as well as VGA cable (after it stopped using HDMI I thought I would give that a try with a different monitor).

I removed the ram and put it back in... tried all slots with a single ram stick and even had an other set to try it with... no luck...

This video shows what happens (most of the time)... it will power up and after a few second it will power cycle and then it will take longer before power cycling again... sometimes it will no longer power cycle after a few cycles and stays "on"... the behaviour of the red led seams a bit inconstant... and when it's in that "stops power cycling" mode it won't cut power when pressing the power button shortly... only a long press will trigger a power cycle...(like when booted) I am no expert but I think while posting a single short press normal shuts it down, doesn't it?


I removed the CPU fan since I read here that even that can cause that... looked at the CPU... no bend pins... (tried an other PSU, tried removing the CMOS battery (+pressing power button), tried removing all hard drives, tried with both SSDs and no hard drives and so on)

The main problem is that I don't really want to spend money on that system anymore though it's still IMO decent but I don't know whether this is a broken mainboard or a dead cpu so chances would be 50/50 to spend money on something that won't fix it... makes me a bit sad

...just now was thinking whether I should try updating the bios...

After reading for hours I stumbled over a thread where a case caused this and it was the front panel button/led connections that caused this... I removed all but the power button and voila it was posting to some "degree"... often enough to update the bios... not sure that actually was necessary but I gave it a shot and was able to install windows... in the end my EVO850 250GB SSD was dead too, super weird... windows (install) can formate it but kind of unsuccessfully... it sometimes works with an error saying it didn't but with the result of a formatted drive which can't be "opened"...

I am writing this just in case someone is faced with the same problem... BTW it looks like I did not have to rename the BIOS FW file to "more" then what's shown in the picture... I had seen videos where a "special number" was needed in the name... could have been because I could flash from within the windows and not via the "ChrashFree BIOS 3". 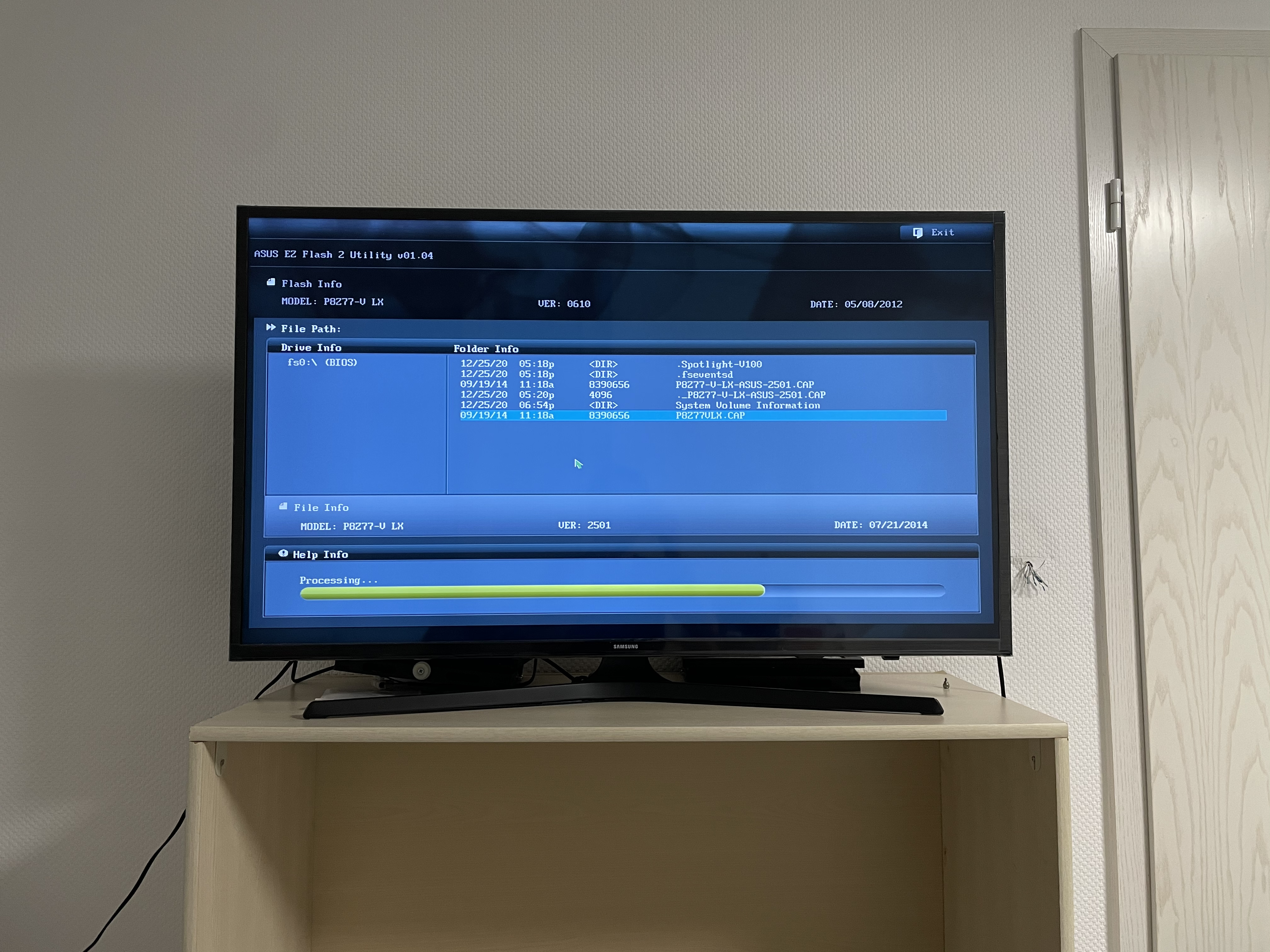 Hope this helps someone in the same spot