Don't know if this is the right board to post but can't but my finger on this error that I have.

Start by saying own/using Astro A40 with MixAmp and had them for years on end. Power cable to USB cable to the back of the PC and also the optic cable for the sounds. Image below shows my playback devices
Realtek Digital is for all windows to game sounds and then communications is for voice chat sounds from discord and skype. 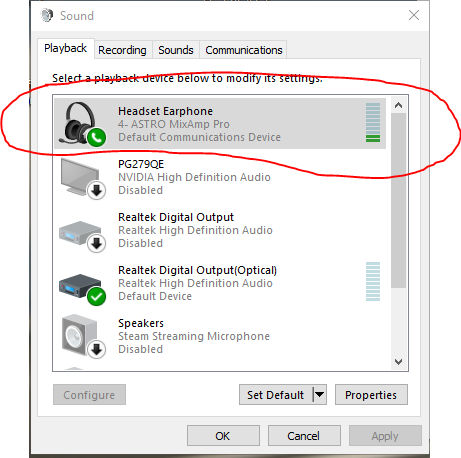 Realtek Digital playback output works, it's always been working and nothing to report. Headset earphone playback that I mark it in a red cycle is messed up that I can't work out what's making it doing it. What's happening to the headset earphone playback device that there are no sounds coming out and at times it works or it doesn't and or the sounds cuts off very fast after 1 seconds. Example when I play the test sound it doesn't make any sound or it makes a sound that last half a short second,

-Used different USB ports and disable/enable it many times, even got it to work at one time when Mouse/keyboard was removed and plugged in again.
-Looked at my drivers, rollback to update and seems to act the same, can't even get the old drivers for the A40 anymore
-Can't tell if it's driver/software issue or hardware like the USB sockets or cable or MixAmp unit.

Realtek Digital output devoice uses the same optical cable input as it says in the image and that is working, always has been working on going for none stop and so it's not the cable then right?
From discord under sounds setting I selected headset earphone playback over and over to and from and to default yesterday and after 5mins got it to work, yet soon I moved to another channel in discord it has stopped and cuts off. So it's there then it's not and cuts off.

The follow things I got connected to the PC are,

-Behringer UMC22. to USB 3.0
-Keyboard to USB 3.0
-Mouse to 2.0
-MIXAMP to USB 3.0
-USB hub that has it's own power cable source that then has Webcam and Xbox controller receiver

Had some if not all USB devoices out and Headset earphone playback still not working. When I plug


EDIT: When I plug MixAmp plug into USB 2.0 in the back of the PC it's working and yet volume is HIGH and can't turn it down and no idea when or how long it will work for
You must log in or register to reply here.
Share:
Facebook Twitter Reddit Tumblr WhatsApp Email Link