Question How do I fix high Non-paged Pool usage?

After several hours of using my computer, my non-paged pool size increases rapidly, up to 9.8 GB. I've been having this problem for over a month and I've tried several things such as disabling Ndu, changing the NonPagedPoolSize registry value to 192, changed the HKEY_LOCAL_MACHINE\SYSTEM\ControlSet001\Services\Null Start value to 4, and updated my AMD CPU drivers and my Intel WiFi drivers. I've gathered information using several utilities, but I'm not sure what to make of the info I've gathered.

Thanks in advance for the response!
1

memory leak? none of the drivers listed are obvious causes, no killer drivers for instance.

Was poolmon runs when you had max usage?

i wish I knew how to decypher Poolmon reports. I did try to watch a video on it a few months ago
it might help you work out results.

it seems you want to look for a file called pooltag.txt which tells you what the Tag means. https://techcommunity.microsoft.com/t5/ask-the-performance-team/an-introduction-to-pool-tags/ba-p/372983

It seems you need to identify the tags that are using the highest total in Diff as they are the ones not releasing memory once its finished.
GPIO is chipset (I have seen initials before)
I don't know what the next 2 are
dc1 has asked for 1041721 but only released 14159. AFAIR dc1-controllers.sys is XBOX controller's driver.
IoUs has released most of what it asked for, just sitting on 100k now. Seems to stand for I/O System completion

An example of a good one is DxgK which I guess is DirectX, it released almost all of what it asked for.

have you updated BIOS?

longer video - maybe too much info but it does show how to use poolmon. You may need to open poolmon a few times and compare figures to see which is growing the fastest. Just cause GPIO is using the most doesn't mean its the cause.


Colif said:
Was poolmon runs when you had max usage?
Click to expand...

I didn't run Poolmon at max usage, I only ran it when I noticed when the NPP size was huge.


Colif said:
It seems you need to identify the tags that are using the highest total in Diff as they are the ones not releasing memory once its finished.
Click to expand...

I will do that the next time the NPP is starting to get large again, and when my RAM is near max usage. Thanks!


Colif said:
have you updated BIOS?
Click to expand...

I flashed my BIOS to the most recent version around 2 weeks ago.


Colif said:
You may need to open poolmon a few times and compare figures to see which is growing the fastest. Just cause GPIO is using the most doesn't mean its the cause.
Click to expand...

Last night, I noticed that GPIO and dc1- were growing by over 100k bytes every time Poolmon updated. dc1 is indeed the XBOX controller driver, which I think has something to do with the wireless headset I'm using. I tried uninstalling and reinstalling the driver yesterday, but haven't noticed anything yet.

Thanks for the videos, I'm currently watching them to see if I can learn anything from them!
0

let me know if you need anymore help

helps me to know how it works too.
0
D

I'm currently running PerfMon in the background; I set it up like how it was set up in the second video you sent me. I will share any findings when memory starts to leak again.
Reactions: Colif
0
D

Just an update after a few days: My computer has been running for a little over 100 hours since I last restart it and I'm currently sitting at around a 660 MB paged pool and a 510 MB non-paged pool, which I don't feel like is normal. I haven't noticed any drastic changes in Poolmon so far. 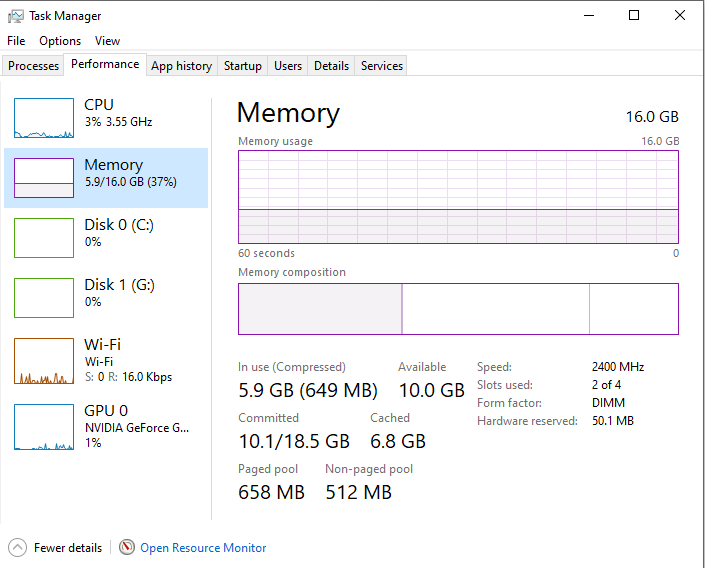