Discussion HTPC Build inside of a 90s CD player.

Hello, I have wanted a proper HTPC for awhile, but I figured I could be a bit creative with mine! A few months ago I got the idea to build a computer inside of a VCR, and more recently I was at my local Goodwill, but didn't find any. However, I did find a CD player that looked like it would fit the bill. It appears to be sold under a JC Penny house brand and is part of a stereo stack. I paid a grand total of $4 for it. The CD player works, but without the remote (not included) the volume is stuck at a level that is barely audible.

I had a few requirements for this system, and have been able to meet some properly, and others will take more work.
Here is what I have came up with so far.

The motherboard/cpu/ram are pretty temporary, I do plan to put much newer parts in here at some point.

From the front it still looks quite unassuming.

From the back it doesn't look very factory anymore. Sadly I did not have the proper tools for the job, so the io shield cutout got butchered, but it worked.

Here are the insides:


The motherboard is screwed into standoffs which I threaded into the base.
The 2.5in SSD is screwed into the rear, and slides in between the PSU and the chassis.
The optical drive is very very crudely mounted using L brackets made from sheet metal, but it lines up with the original optical drive bay. The brackets are glued to the drive and screwed into the base of the unit.
The front power button of the CD player has been connected to the motherboard and will power the PC on.
The PSU is mounted there using a block of wood as support. This is TEMPORARY.
Power cable has been spliced and run through the chassis where the hole would normally be.

Things to do:
Mount the PSU in such a way that the ODD can be plugged in.
Solder the power cable (its just temporarily taped together for photos)
Sort through the pile of am3 and am3+ CPUs and install something a little better. I have a phenom x6 but it is iffy, and I have a FX 41XX that works somewhere, but not sure if its with the rest.

I wish I had been able to install a GPU, but that does not look like it is going to be possible unfortunately. Even LP GPUs are too tall.
Reactions: Flayed
0

What's the situation with the PSU cable? Did you splice two cables together? You'd want an IEC320 C13-to-C14 cable for proper connectivity. Or just a panel mount IEC C14 (I haven't been able to find a C14-C13 prefabricated cable where the C14 end is panel-mount, if you do, lemme know):
https://www.amazon.com/s?k=iec+c14+panel+mount&crid=2VDB7FV6AZQCW&sprefix=IEC+C14,aps,193&ref=nb_sb_ss_ts-doa-p_3_7

You may also want to look for a IEC C13 cable with a 90 degree end for better clearance (make sure it bends the right direction!)
Last edited: Apr 29, 2021
0

There is a hole in the metal where the ac cord normally came out in it's former life. I am using a normal pc power cord, but in order to fit it through this hole I had to cut the cable in half and it will need soldered back together.

The tape is all temporary. The masking tape is there so the cord doesn't run on the metal, I really need a grommet.

The electrical tape is holding the cable together for photos untill I solder it. (No I'm not plugging it in that way)
0

I soldered the cable and made a grommet of sorts out of about 4 layers of heat shrink. The cable no longer can move, and it shouldn't be any risk
https://ibb.co/gVsbjJ8 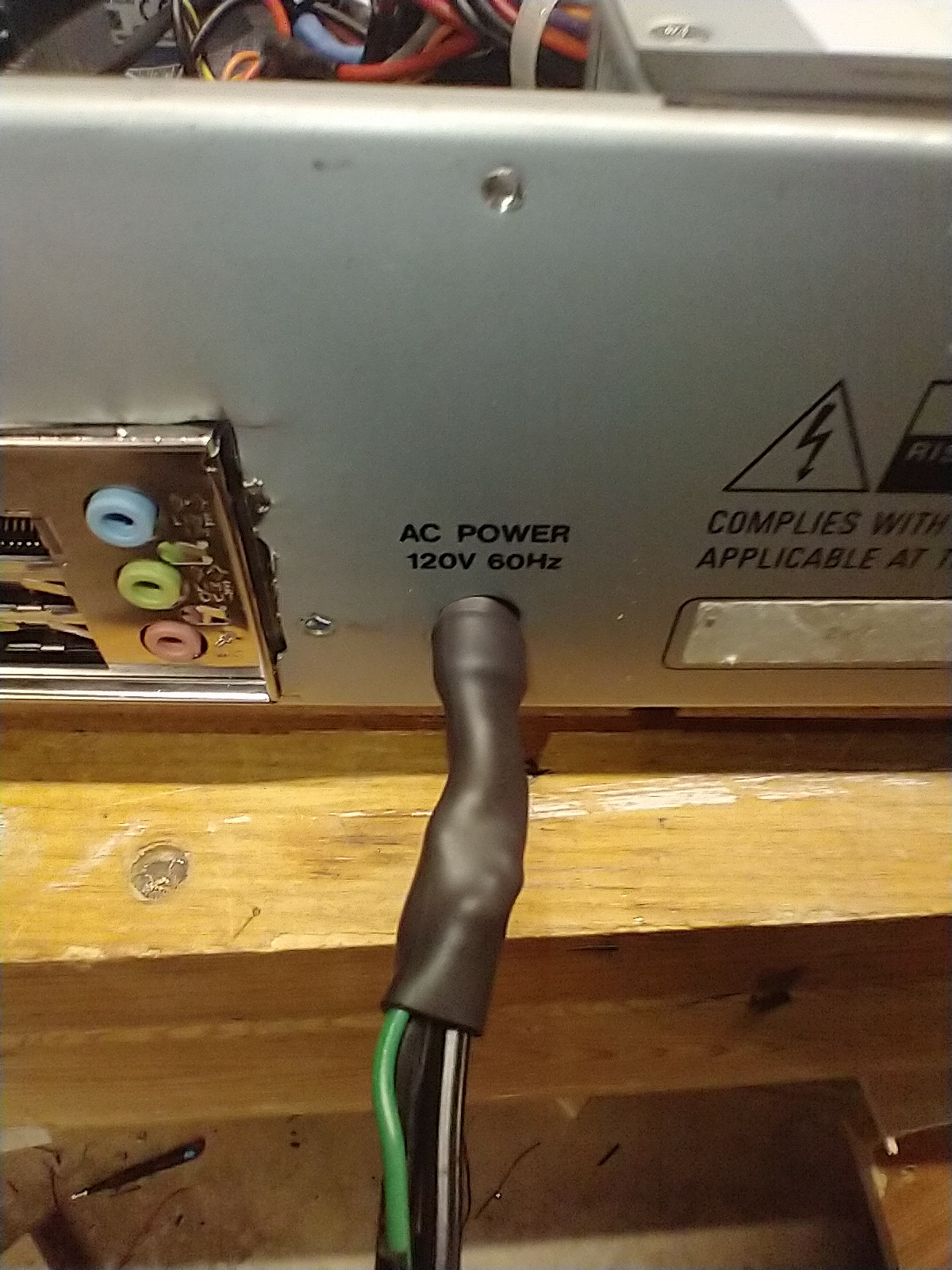 ibb.co
I wrapped it in tape to clean the look up.
https://ibb.co/GtCffJC

And yes, it works beautifully.