I’ve recently built a new computer back in September 2019. Bought new motherboard, case, graphics card, cpu, memory and basically everything but a new hard disk. This was working fine until a week ago when I kept randomly running into various kinds of BSOD like driver_verifier_detected_violation, whea_uncorrectable_error, special_pool_detected_memory_corruption, and kmode exception_not_handled.
I thought it was maybe a driver error so I nuked the computer and reinstalled windows 10 from fresh deleting all files on my computer. But even after this I kept running into a BSOD when I tried starting up a specific video game (this game was working fine last week).
I checked bluescreenview and saw all of them involved ntoskrnl.exe which I saw indicated a hardware issue so I ran memtest86+, intel CPU burn, Samsung magician (for my primary ssd), and switched over to my builtin graphics to eliminate GPU errors. Memtest86, Samsung Magician ,and cpu burn (20 runs at max) didn’t run into any issues and it kept crashing even when using built in graphics so probably not a GPU problem.
I figured at this point its probably the motherboard so I went out and bought a new one but after installing it the game still forces a Driver_verifier_detected_violation bsod every single time. I’m kind of at a lost here as to what to do next. Any help would be great thanks.

I feel like I'm having the same issue that you are to some extent and noticed our mobo is the same, and I think so is the RAM. I'm not great about computers so just trying to find if there is a connection...

My issue however, was that my BSOD showed whilst gaming, then I was unable to even get to desktop. Disabling intel turbo boost in BIOS helped for a week, then again video games caused BSOD... Then I rolled back Nvidia drivers but the issue again returned after a day of everything working fine...

Could you let me know if you find a resolution to your problem and I'll also keep an eye out and let you know if I get any closer to fixing mine?
0
S

Rizzixe said:
I feel like I'm having the same issue that you are to some extent and noticed our mobo is the same, and I think so is the RAM. I'm not great about computers so just trying to find if there is a connection...
Click to expand...

Actually the MOBO I just posted is the new one I swapped in. I was using an ASUS Prime Z390-A earlier but having the same issue still.
0

Setherzam said:
Actually the MOBO I just posted is the new one I swapped in. I was using an ASUS Prime Z390-A earlier but having the same issue still.
Click to expand...

Did you reinstall Windows after the motherboard swap?
0
R

Setherzam said:
Actually the MOBO I just posted is the new one I swapped in. I was using an ASUS Prime Z390-A earlier but having the same issue still.
Click to expand...

Oh I see, I'm actually no closer to a resolution at the moment so will keep monitoring this
0
S

drivinfast247 said:
Did you reinstall Windows after the motherboard swap?
Click to expand...

I haven't yet; I thought it wouldn't matter since it's still having the same issue after mobo swap. I'm a little apprehensive given the hours needed but I'll try that tonight.
0
S

Alright. Reinstalled windows once again reformatting both drives before installing so everything should be fresh.

Very first thing I did was run verifier.exe on all installed drivers and it caused a Driver_verifier_detected_violation bsod after restarting
0
R

Out of interest, have you resolved your issue yet? Your latest update about verifier is exactly what I'm getting also - with verifier working my PC is stuck in BSOD loop until I turn verifier off in command prompt.
0
S

No, I'm in the process of swapping out every piece but given how the situation is right now parts are coming in slowly. Next I'm going to try switching out the memory sticks and hard drive since I can borrow those from a friend tomorrow.
0
S

Alright I've replaced my SSD and my memory stick and removed the hard drive that doesn't have windows installed on it for good measure. I decided to run furmark at 4k resolution and got a stable 60 fps with no crash during the test so I'm pretty sure its not that either.

Running verifier.exe is still causing a Driver_verifier_detected_violation. So really the only thing left to change out is the CPU.

Is it possible that verifier can cause a BSOD even without any hardware issues though?
Last edited: May 2, 2020
0

Disable Driver verifier.
Why do you keep running it? It is meant for driver software development purposes (not for everyday use).
Reactions: drivinfast247
0
S

Well I decided to just let the computer run after replacing the motherboard and ram. It's still failing the driver verifier but at least its no longer randomly crashing when i'm playing games so I think one or both components were bad.
0 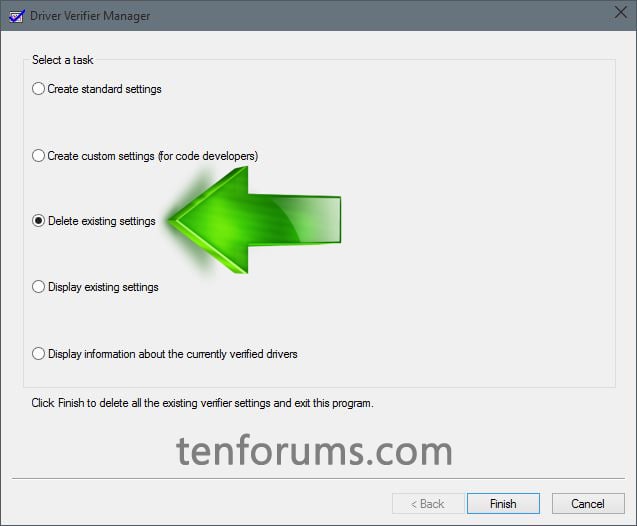