Question I had to close the setup mid way while I was reinstalling an app. Should I be worried?

I was updating Samsung Magician but then I miss clicked to "I live in European Country" which I'm definitely not from. At first I didn't wanted to reinstall this software just because I selected "European Country" but I still ran the setup wizard just out of curiosity and selected "override the previous installation".

I then got this popup, this same popup appeared when I was updating Samsung Magician from v6.1 to v6.2 before the miss-click happened but I ignored it since I was just updating the software and not reinstalling it.

I don't exactly know what its purpose was but while it was running I noticed Samsung Magician stopped running in background and was gone from system tray.

So does this mean the only purpose of this popup is to terminate running instance of Samsung Magician and nothing else? This normal setup wizard runs after this popup is over 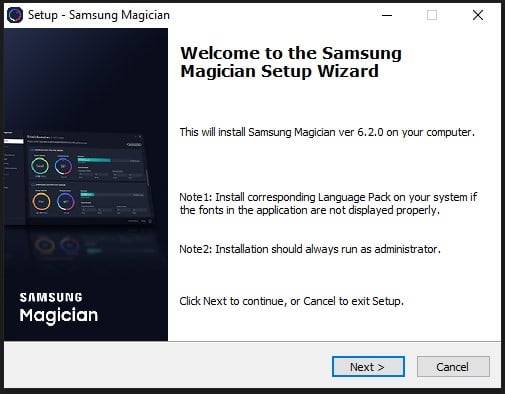 Because of all this happened I just ran the setup wizard again and reinstalled the software but this time instead of closing the setup mid way I completely reinstalled it and I still don't know if there are any issues with software or not.


What I'm worried about is because I closed the setup right after that "please wait" popup last time the application might not run properly in future even after reinstalling it because I faced the similar issue with a software called Nahimic audio. People in MSI forum told me the only option left to fix Nahimic was to reinstall Windows since many of its services still runs in background which causes many audio issues even after uninstalling it and I don't want to go through that experience again.

As I said above currently there doesn't seem to be any issue regarding this software but I'm still worried that I might get one in future because I closed the setup mid-way which was a stupid mistake.

If that popup only purpose was to just close running instance of Samsung Magician and nothing else then I think there's no problem with the application but I need to know what you guys thought are on this matter.
0

There's no need to worry. Samsung Magician is just a simple utility to check the SSD's health, run benchmarks, check for the total bytes written and to set preferences. It's not needed for the proper operation of the drive and it doesn't matter at all whether it's running or not. In fact you could uninstall it and your SSD will carry on working unaffected.
Reactions: Ishit Arya
You must log in or register to reply here.
Share:
Facebook Twitter Reddit Tumblr WhatsApp Email Link